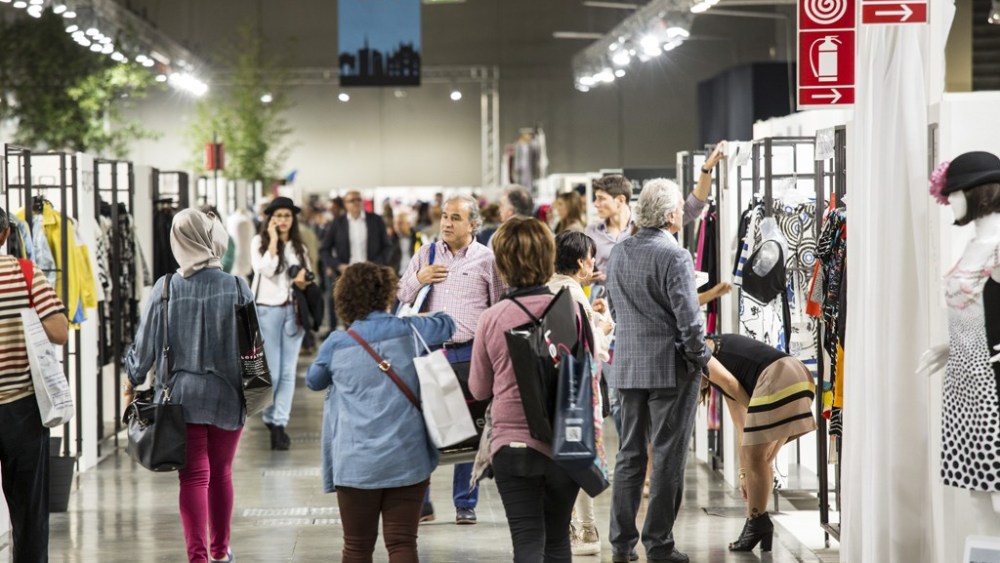 MILAN — There were, for the second season in a row, double-digit gains in the number of buyers attending the Milanese women’s-wear and accessories trade fairs White, Super and Milano Prêt-à-Porter, buoying optimism among Italian women’s-wear companies that recovery is under way after the economic doldrums that accompanied the euro-zone crisis.

The number of buyers attending Super and White climbed 18 percent compared to last September’s round of the three-day shows during Milan Fashion Week. At MIPAP, buyers soared 24 percent. White said it attracted 18,000 visitors, while Super and MIPAP reported 6,500 and 4,354 buyers, respectively.

White president Massimiliano Bizzi cited the fair’s “formula,” evidenced by the contemporary fashion fair’s physical exhibition space — ex-industrial, loftlike buildings in the hip Tortona neighborhood — that gives it the festive feel of a fringe event. A second relevant element, Bizzi said, was that White provided good hunting grounds for buyers, with a 30 percent exhibitor increase,  products ranging from beauty to ready-to-wear and a new area dedicated to bijoux, “like a department store.”

“Here, you find things that are difficult, exceptional and impossible to find,” said Bizzi, sitting in the VIP lounge for press and buyers.

Bizzi pulled over Luca Gritti as a case in point. Gritti is a Venetian maker of carefully researched “artistic perfumes” at the family perfumery bearing his surname. Gritti develops fragrances for third parties but also has a line of house-brand perfumes based on 500-year-old formulas invented by his ancestor, Alvise Gritti.

“We modernized the formulas and brought them up to legal norms,” said Gritti. “They are all extremely warm fragrances, with precious woods, resins and incense. They come from the Silk Road route.”

Start-up clothing label Giuliette Brown & Filippa Lagerback showed its spring 2015 collection, the second since launching in January. Giuliette Brown is the nom d’art of Giulia Bruni, who honed her fashion design skills at the luxury denim label Guess when her father, Angelo Bruni, was its creative director.

“She looked almost like a spokeswoman for my brand,” chimed in Bruni.

The 30-piece Made in Italy collection draws on Sixties tailored dresses and pants in thick pastel jacquards that “recall textiles used in interior design,” said Bruni. Pieces wholesale for 90 euros to 130 euros, or $115 to $166.

“I needed something technical, and I couldn’t find what I wanted,” said Chinchelli. “On a surfing trip, I don’t want to pack a lot of things,” she added, hence her “street to the sand” concept.

One-piece suits retail for $150 and bikinis for $80 to $100. Distribution has focused, so far, on surfer shops in California and Hawaii as well as resort areas, with sales in Japan and South Korea.

At Super and MIPAP, the atmosphere changed to slick stands in traditional trade-fair pavilions at Fieramilanocity.

Another exhibitor, Club Voltaire owner Alberto Melani, said, “My customers are professional middle-class ladies, over 30 years old, who have money issues but also need to maintain an image as they are active in their communities.”

Melani said sales this year had risen 10 percent, to 3.5 million euros, or $4.4 million, with about 50 percent exports.

A crowd of eager buyers fingered eyelet lace, flounces and heavily embroidered cotton frocks at Antica Sartoria. They handed credit cards to order-takers who swiped their cards like party hosts handing out drinks from a bar.

“We sell fun, [a] party mood, happiness,” said Riccardo Ruggiti, head of the Carpi-based firm. “We sell only summer collections.”

Antica Sartoria has 10 shops in popular upscale tourist towns such as Capri, Positano and Portofino. But for wholesale business when it’s wintertime, the company heads to places in the Southern Hemisphere so as to keep selling summer clothes all year round.

Ruggiti said his firm had been growing 25 percent to 30 percent per year and would hit sales of 10 million euros, or $13.7 million, in 2014. His winning formula, he said, was festive, casual, often intricate clothes at “very competitive” prices and made in India.

The wholesale price of a denim jacket with elaborate white beading was 40 euros, or $51. A finely embroidered piece with “micro-knots,” which he said “took five days of handwork,” was priced wholesale at 50 euros, or $63.40.

“When someone enters here, he enters with the spirit of wanting to buy,” said Emanuela Forlin, MIPAP exhibition manager for Fiera Milano, who said the new location worked well and that feedback from exhibitors was “very positive.”

“The strategy of Super is to provide scouting for buyers,” Raffaello Napoleone said at a Milan presentation of the fair earlier in the month. Active talent search and a 40 percent change in exhibitors in each edition are major selling points.

Nikishina’s spring 2015 collection was full of boxy, oversize wool, cashmere and sheepskin coats in a light palette of gray and pink, pastel blue and green. Nikishina said political turmoil in the Ukraine and Western sanctions against Russia meant her fashion-sector colleagues complained about business but had left her own clientele unaffected. She welcomed the devaluation of the rouble for increasing her prospects abroad.

“In Russia, every woman has to have a fur coat to show [status]. We want to get rid of this, to make it easy,” she said.

Across the hall, An Italian Theory blared Italian identity, Pop Art whimsy and retro-irony. The clothing label grew out of a book project by designer Alessandro Enriquez. The collection is made in Italy, with Tessitura Monti’s fabrics and Azzurra Gronchi’s bags, which are made in her family’s Tuscan tannery, Conceria Samanta, a leading manufacturer of printed leather for luxury labels.

By the second day of the fair, all of Samudio’s 500 business cards had been snapped up. Samudio described his tropically colored, bristling necklaces as “urchins creeping down your neck.

“I am a marine biologist and never had any formal training in fashion,” he said. “The collection is inspired by the coral reefs of the Philippines.”

Samudio said he went into fashion accessories when he couldn’t make enough money in biology but is “doing [his] share for the environment” and society.