The first edition of the show was spirited and visibly well-trafficked, but the combination apparel and footwear show fell short on foreign buyers. 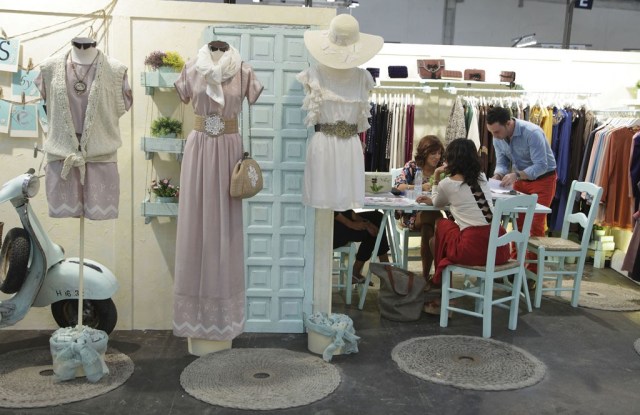 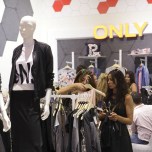 MADRID — The first edition of Momad Metropolis was spirited and visibly well-trafficked, but the combination apparel and footwear show fell short on foreign buyers, vendors agreed.

“This fair covers the Portuguese and domestic markets well. Otherwise, we’ve seen only a few international buyers,” said Alberto Rodriguez, general manager of Vilagallo, a Madrid-based dress manufacturer with 250 sales points in Spain and 150 outside the country.

Consumer spending in crisis-driven Spain — where unemployment hovers around 26 percent, or roughly 6 million people — is “practically dead,” he added. “Even sale merchandise reduced as much as 70 percent isn’t selling. Only tourist areas like the Barcelona coast or Mallorca and Marbella are doing OK. For example, Russians account for 50 percent of sales in our Catalan store, which is south of Barcelona.”

On the other hand, “The economic situation helps us and the industry here to push forward. We were too dependent on neighbors like France and Portugal.” Rodriguez said the brand will open its first international locale — a 1,076-square-foot London flagship in the Duke of York Square — by Christmas. “The U.K. is our second market after Spain. We have 100 accounts there, including five Fenwick locations.”

The three-day fair, held in three halls of the Madrid fairgrounds, drew 17,423 visitors, of whom 11 percent were foreigners, the lion’s share from Portugal, according to official figures. It had an all-but-the-kitchen-sink product mix for what organizers called “a total look” that included midmarket brands featuring summer dresses and separates, eclectic party clothes, a little swimwear and novelty knits in lightweight yarns alongside children’s categories, handbags and shoes.

Echoing other buyers, veteran e-tailer Laura Schumacher, scouting the fair for her Alicante, Spain-based espadrillesetc.com Web site, said Momad was “not spectacular and it wasn’t terrible; it was just OK.”

“The footwear here isn’t worthwhile; it’s too soon, and the offering is very small,” said Isabel Suarez, head buyer for Chanil 2006, a one-store retailer in Santa Cruz de Tenerife, the Canary Islands. “You’re better off going to the Milan show.” Suarez said she picked up some casual items. “I used to buy dressier styles, but the world is changing, even in Tenerife.”

Not everybody can travel to Italy or Germany, pointed out Chie Mihara, co-owner and designer of her namesake global shoe brand. “Good or bad, this is where the traffic is and it’s all we have in Spain. We have to be here.” Mihara showed mannish styles for women and a Sixties vibe, low-wedge sandals in white and nude, and the New York “cabbie” pump in yellow with a graphic black and white heel.

“In the U.S., we’re passing a bigger number of pairs than last year,” she reported. “We’re growing there.”

Momad director Francesco Malatesta said the new all-in-one concept (it replaces former trade shows SIMM and Modacalzado) is “an important change. It’s what the brands wanted and what we [as organizers] wanted.” Citing customer-friendly open booths and a freshened-up decor, he called the fair “more of a nowadays event.”

“The first step was to update and improve the Salon, to clean house and go forward.” The result, he claimed, has been “fantastic. Because of the less-old-fashioned format, we’re attracting younger brands and, at the same time, a different, more modern customer. The best way to improve your future is to invent it; that’s one of my favorite lines. We’re pushing strategy, identity and very clear targets.”

One of the most immediate, Malatesta confirmed, is the joining of Momad with Mercedes-Benz Fashion Week Madrid at the February 2014 edition, a consolidation meant to make it easier for buyers “because nobody will come here for both events,” he reasoned.