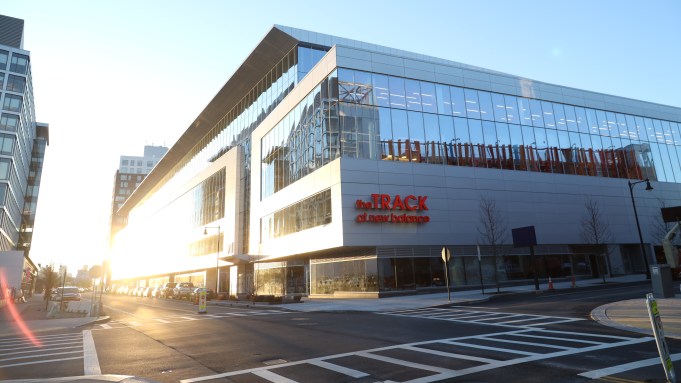 BOSTON — New Balance is making a play for a better position in the fashion and activewear games with the opening of a 500,000-square-foot facility — complete with an indoor track, research lab, sports bar, climate-controlled product-testing rooms, brainstorming hubs and more — in its hometown of Boston.

“It’s been years in the making; [the facility] is going to be a place where athletes can come and set records,” Joe Preston, president and chief executive officer of New Balance, told WWD Wednesday night at “The Track”‘s grand opening party.

While the facility at 91 Guest Street in Boston is dubbed “The Track,” Preston pointed out that “it’s not just about track. It’s a multiple-use facility,” referring to the ability to convert the 72,000-square-foot indoor track into a “field” for soccer or volleyball games, or a basketball court. In addition, the stadium, with just under 5,000 seats, can be used for large-scale sporting events, community tournaments and concerts.

“[The facility] truly is the intersection of sports, fashion and music,” Preston explained. In fact, even preopening, the event space has been fully booked for events through April 2023.

The first event was rapper Jack Harlow, who performed during the grand opening in front of roughly 1,000 people — a mix of professional athletes (such as Olympic track-and-field runner Gabby Thomas, tennis player Eugenie Bouchard and Oklahoma City Thunder basketball player Darius Bazley), celebrities (“Euphoria” actress Storm Reid), fashionistas, influencers and models (for a fashion apparel presentation) and New Balance executives — all of whom showed up to walk the track-like red carpet in New Balance sneakers and scope out the new digs.

“I was most excited about meeting her,” Harlow said while standing next to Reid on the red carpet. The duo, New Balance ambassadors, met for the first time that night.

But the facility was designed as more than just a venue for attracting top athletes and ambassadors in the highly competitive world of sports and sports marketing. New Balance is also betting that the investment in the facility will help the privately held company — one known primarily for its running shoes — become more of a fashion apparel player, while bringing new money to the Boston area by transforming it into an international sports hub.

“Part of the strategy has also been to always make [the facility] a destination in Boston,” said Romina Bongiovanni, head of global communications at New Balance. “Boston is one of the best cities for sports, period. We want this to be a center of excellence for sports. A place where it can be enjoyed by everyone — not just athletes or just people coming to this [facility] as a brand — but everybody else in the community.”

Bongiovanni declined to comment on how much the facility cost. She did say it took three years to construct and nearly a decade to devise the concept. The end result is a New Balance-like campus in Boston’s Brighton neighborhood with the Track building across the street from New Balance’s corporate headquarters.

In addition to the indoor track and field, visitors and employees can watch events on large-screen TVs while eating and drinking in the Track building’s ground-floor Broken Records beer hall. The building also houses the 17,000-square-foot research center, which comes equipped with a climate-controlled chamber center that can simulate rain, humidity and freezing cold weather and even control oxygen flow for product testing. There are also body scanners, a run lab, a hydration station and a smash lab for testing sneaker durability.

“Our mission here is singular: It’s to form research that’s going to lead to insights with the ultimate goal of bringing new product innovation,” said Sean Murphy, the company’s senior director of innovation and engineering. “There’s many levels to how we make products. It’s not just cutting open competitor samples. We’re constantly studying our customers. It’s really about making sure you understand the customer intimately, making sure you’re understanding new needs that they may have and problems that they’re having and going after them. It’s also working with other partners to develop materials that will enable us to overcome the problem that they’re having with something.

“Ultimately, we want to be number-one in athletic footwear, as well as apparel,” Murphy continued. “These tools are going to give us the insights we need to basically achieve those goals.”

The majority of New Balance’s revenues stem from its footwear category, according to Julie Pike, the brand’s senior vice president of global apparel. She added that “apparel is a growing part of the business and it’s growing aggressively. When I think about our footprint around the world, we have a sizable apparel business.”

Pike declined to give specific figures. But New Balance has been cranking out a number of fashion collaborations in the past year, including partnerships with Bandier, Staud and accessories brand Bala. In addition, last spring New Balance tapped Teddy Santis, founder of New York-based streetwear brand Aimé Leon Dore, to become creative director of its Made in USA brand.

“Which was unprecedented for the brand,” Bongiovanni said. “While we’re not acquiring his company, we’re acquiring his service, his vision, his creativity and partnering up on things that enhance what we have to offer for consumers.

“In the future, we may have new acquisitions,” she hinted. “But nothing on the horizon right now.”

Meanwhile, Wednesday evening’s fashion presentation showcased a variety of men’s and women’s looks, which Pike described as fashion-forward lifestyle pieces that can be taken from the gym to the streets.

“It’s a nice nod to the future of where we’re headed with the apparel business,” she said. “Where we are within our apparel journey, one of the things we’re really focused on as an apparel team is how do we obsess over better [products]? And really focus on fewer, but obsess over better. What are those incredible details and incredible technologies that we’re going to build into the product that really drives obsession? This facility provides us such incredible insights for us to really deep dive into performance. But also, [to discover] how he or she is engaging off the court, or off the track, as well. We want to obsess over apparel, like we have obsessed over footwear. That really puts us at the intersection.”