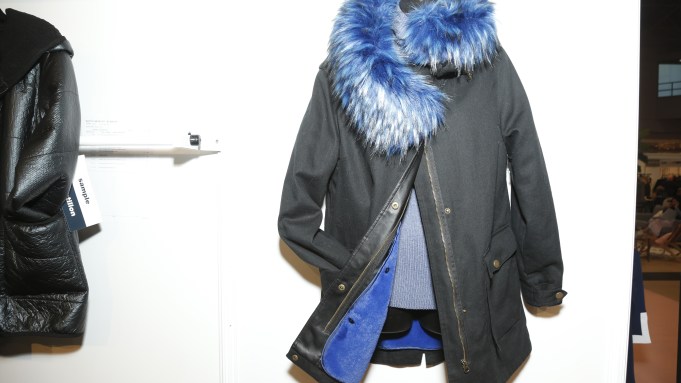 Details using fur — real and faux — or velvet and suede seemed to be the new focus for early fall options at the recent Moda Manhattan and Fame shows this week.

The shows were held at the Jacob K. Javits Convention Center in Manhattan. These weren’t the main seasonal shows, but still important for buyers who wanted to get an early read on fall, as well as make last-minute fill-in purchases for in-season deliveries.

At Moda Manhattan, which targets the moderately priced contemporary market, Ellen and Joel Rappaport were busy showing the new line for Nikki Jones, an outerwear brand from Montreal. The line is two years old, but only showed smaller capsule collections in the past. This particular assortment is filled out and features a new polyurethane jacket that is waterproof, with a fleece lining. Selling for $75 wholesale, the jacket is machine washable, although not machine dryable. Also on display was a denim jacket, not unlike the one it had for spring, but the updated version for fall featured a faux fur collar, as well as a faux fur fleece lining for the body. What’s interesting is that instead of just a body lining in the jacket, it also featured a poly-filled lining for the sleeves. The jacket wholesales for $80. The line is sold at better specialty stores.

Mitchie’s Matchings, also a Canadian firm, showcased real fur. Two shawls on display were from dyed fox fur, although there were also other items available in rabbit fur.

Susan Cameron, the designer, said, “The hottest items are fur-trimmed capes; shawls and fur-pommed hats are huge. She is interested not in full skins but in accessories trimmed in fur.”

While bright colors had been prevalent in previous display in past shows, Cameron said this year the “naturals are back in a big way.” Soft pink and gray are the popular colors, while fox is preferred over rabbit, the designer said. She added that fox fur is more easily dyed, and doesn’t shed.

According to Cameron, sales are up 30 percent over a year ago. As for the interest in fur trims, Cameron said, “Every designer line is showing fur. What the higher-end shows begins to trickle down to the middle market, and fur-trimmed accessories are affordable.” The designer said fur is so popular that she is seeing sales across all 50 states and Mexico, even in warm weather states such as Florida. “That’s never happened before,” she said.

At Baciano, owner Reza Khoyi was showing a fall line of comprised of cardigan sweaters and indoor jackets, mostly in charcoal and gray hues. Wholesale prices were between $30 and upper $40’s. A bestseller was an acrylic boucle car coat that featured faux fur trim, wholesaling for $46.

According to Khoyi, traffic seemed slow at this season’s show, but he also attributed that to the economy, noting buyers may not need to buy as much for stores if shoppers are also buying elsewhere online.

He also noticed what he believes is an ongoing trend that likely to continue: “A lot of buyers are buying fill-ins. They are late shoppers. I think that’s because of cash flow and that’s why many are waiting to closer to the season to buy.”

Over at Just Black Denim, Diane Kim, a sales representative, said frayed and distressed denim are still popular choices among buyers. One change is that instead of a small amount of fraying on the bottom cuff, the fraying has become extended — making the look seem more like long fringes. The jeans were price between $25 to $35, wholesale.

Over at Fame, the show targeting the juniors crowd, new fall looks such as those at Fate by LFD included lightweight outerwear options that wholesale at between $20 to $50. The jackets featured long-sleeves that had touches of velvet and suede.

Owner Erin Cohen said the color palette is mostly back to neutrals, with a small pop of color here and there. She said traffic at the show was slow at certain periods, and attributed that to the economy. Most of her customers were interested in “fill-ins” for immediate deliveries to add to what they already had in inventory.

Over at Thread & Supply, Takara Bushnell said fleece vests and jackets were popular, particularly its line of colored fleece called the “Wubby-Pop,” a nod to the thick textured, nubbed-fleece that is used. Bushnell also said floral detailing has also been popular among buyers. The vests and jackets had wholesale price points between $32 and $35. She said traffic at the show tended to be better in the afternoons.