Ones to Watch at Coterie

Retailers who crave newness at Coterie will discover a clutch of first-time exhibitors, as well as established brands that are venturing into new categories. 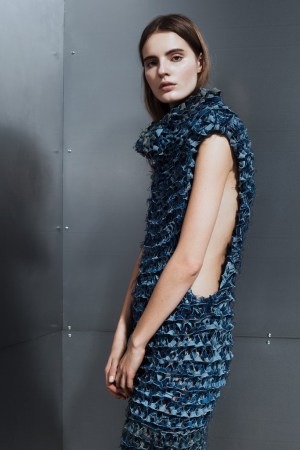 Italian Trade Show Operators Bet on 2021 With Some Adjustments

Retailers who crave newness at Coterie will discover a clutch of first-time exhibitors, as well as established brands that are venturing into new categories.

For Ström’s new sportswear line, Erika Strömqvist prefers to give form to emotions rather than chase trends.

Some of the feelings she wants to infuse in her inaugural fall collection that accompanies her two-year-old denim line are “honest and heartfelt.”

“I’m very Scandinavian at heart,” said the Los Angeles-based brand’s Swedish creative director. “It’s a feeling that I have to sketch with when I design my collection.”

Strömqvist’s feelings appear to run deep, as her sportswear debut looks more sophisticated than the T-shirts and hoodies that are standard in many denim designers’ forays outside of five-pocket jeans. Keeping a streamlined palette of black, white, gray and royal blue, Strömqvist imagined a tuxedo-inspired jacket with a cocoon hem, a sleeveless maxidress knitted out of recycled denim strips, and cuffed trousers that are cropped to midcalf. She also updated a denim vest with a funnel neck from her spring collection in calfskin leather and silk.

With the exception of the recycled denim items made by Strömqvist’s mother in a Swedish village bordering the Arctic Circle, all the sportswear is manufactured in the U.S. Retail prices range from $144 to $998. Matthew Fisher, Strömqvist’s husband, who serves as Ström’s president, estimated that sportswear makes up one-third of the entire fall lineup. He declined to provide sales projections for the brand, which is sold at specialty retailers including Ron Herman, Brooklyn Denim Co. and E Street Denim.

Despite being discovered by the late Corinne Day and spending years modeling for Nicolas Ghesquière, Karl Lagerfeld and Marc Jacobs, Strömqvist makes sure to design accessible and wearable clothing.

“I never made this to be a for-a-model line,” she said. “It’s for the woman who dresses for herself.”

Genetic Los Angeles is scrutinizing the women’s sportswear market with a viewpoint afforded by living in the City of Angels.

“When you try to define L.A., it’s a casual, undone sophistication,” said Ali Fatourechi, Genetic’s founder, creative director and chief executive officer. “Everybody associates it with activewear or sweats. For me, it’s vintage.”

For the fall launch of its first sportswear line, the eight-year-old brand is recalling the early Sixties, when bikers personified the nomadic rebel lifestyle. It has concocted a roomy plaid flannel shirt with a necktie that can wrap like a scarf, a denim vest enhanced with leather laces, an Army surplus jacket cut from Japanese cotton-brushed twill, and denim chaps among 45 sportswear pieces. The collection is steeped in neutral hues, like black, gray and blue, with a pop of red.

Genetic is diversifying its business under the direction of a new executive team. Bryan Timm joined as president after a stint as chief operating officer at Halston, Arnie Gale took on the position of president of sales following a tenure at J Brand with the same title and Davis Church came aboard from R13 Denim as design director.

Declining to project sales targets, Fatourechi said he aims to derive half of his fall revenue from sportswear. Considering that prices start at $110 for knit T-shirts and go up to $495 for the chaps and $1,500 for leather biker jackets, he’s not worried about imposing sticker shock on shoppers.

“If the product is right, the quality is impeccable [and] the wash looks authentic, people pay,” Fatourechi said.

To differentiate her new knits business from numerous competitors in Los Angeles, Cynthia Vincent is taking extra steps to elevate the casual looks.

Besides developing her own jacquard inspired by a Balinese print, she also integrated an ancient Egyptian metal technique called assiut that embroiders netting fabric with metal. Then she paired colors in light and dark versions, such as cobalt blue with midnight blue, to build a richer palette.

Vincent said there’s a need in the market “for a novelty, detailed knit line with elevated fabrics that is my aesthetic, but a little more on the casual side.”

With Cynthia Vincent Knits, retailing for $65 to $295, Vincent aims to reach retailers such as Shopbop, Bloomingdale’s and Planet Blue that currently carry her 11-year-old bohemian-inspired brand. Still, the knits’ lower prices could open doors to independent retailers that may have been intimidated by the prices for her main line, which costs twice as much. With sales managed at Coterie by Hatch Showroom, Vincent is aiming for the knits business to contribute 10 to 25 percent of total revenue, which she declined to disclose.

Vincent is dedicated to producing the knits in Los Angeles.

“We do knits really well here,” she said. “I’d rather pay a few more dollars to have it stay domestic.”

Antonia Martel strives to merge the best of two cultures in her namesake clothing brand.

Born in New York, the 30-year-old designer went to high school in the Philippines before returning to the Bronx for college. She’s equally enamored with Victorian homes and Gothic cathedrals as she is with Wes Anderson movies and the traditional embroidered barong shirts from the Philippines.

In her three-year-old line, “everything is a mix of modern and nostalgic at the same time,” said Martel, who learned to design fashion not at school but through a past stint with streetwear line N/Tice. “I know what I like and dislike in clothes. I’m very particular with the inside of a garment being as good as the outside.”

Responsibility for ensuring that a garment’s construction is precise rests with her mother, who made clothes in New York during the Seventies and Eighties for labels such as YSL and Lanvin. Mama Martel sews all the clothes for her daughter’s company, which has sales of less than $100,000. Wholesaling for $70 to $300, the line is stocked at specialty stores like Condor and Spiritual America, both in New York.

The Millennial designer takes all the credit for the inspiration for the fall collection, to be shown in Coterie’s TMRW section. Evoking what Martel describes as “Wednesday Addams on acid,” the styles include wide-leg mohair trousers, a black sleeveless turtleneck dress and a pleated midi skirt cut from a polyester-and-Lurex blend that changes color from silver to purple as it moves.

“It’s a new touch to very proper dressing that is covered, but in interesting fabrics that you don’t expect to be used,” Martel added.

As a young Ukrainian designer presenting her fashion line in the U.S. for the first time, Ksenia Schnaider’s Ksenia Marchenko is trying to strike a balance.

“We are trying to find our balance between functionality and beauty, the accessibility of modern technologies and Slavic traditions,” said Marchenko, who started her brand in 2011 with graphic designer Anton Schnaider.

Standing in the middle of this balancing act is the blue-collar worker, who serves as the inspiration for the black wool trousers lined with orange cotton, cotton-silk dresses printed with orange roses and other styles.

“The road service work, building, cleaning, farming and other similar occupations dictated styles and colors of the collection,” Marchenko said. “The collection contains prints, which are based on blurred Ukrainian traditional embroidery and reflective elements on monochrome fabrics.”

With wholesale prices running between $150 and $500, her annual sales total less than $100,000. Yet, Marchenko believes her designs are universal enough to expand her retail network beyond the half-dozen stores in Ukraine and another seven overseas, including one each in New York and Washington. Plus, she can take advantage of the nearby factories that work with companies like Zara and produce her clothes.

“I am always thinking about timeless design,” she said. “I want to create clothes that our customers can then give to their children.”

Not only did the Seattle-based designer name her business after her maternal great-grandmother, she also incorporated brass tackings from the region’s boating industry, as well as the lush colors of the neighboring forests and the silhouette of the quilted tote that her mom used in the Seventies. Plus, she anchors the production line, sewing up to four bags a day for her three-year-old business.

“When a woman carries an Alice Noon handbag, I want them to know it’s handmade for them,” said Eley.

Having never attended design school, Eley learned how to work with leather by cutting the skins into thousands of earrings sold to retailers such as Nordstrom for her previous venture called Daly Bird. With Alice Noon’s annual sales totaling less than $100,000, her goal is to expand beyond Les Amis, Clementine and the handful of Seattle stores that currently sell her accessories. Wholesaling from $95 to $500 and showing at Coterie’s TMRW section, her sleek, minimal designs include a huggable clutch patched in contrast suede with a diamond-shaped leather panel in the center and circular cross-body bag enhanced with an inlay of water snakeskin.

All in all, the 20 pieces for fall sum up Eley’s fashion ethos, which is “taking something from your childhood and making it chic and taking it into a new decade,” she said.

After cofounding Frame Denim to reinterpret skinny jeans, Jens Grede is turning his attention to the little black dress.

With Grace MMXIII, Grede is revamping the wardrobe staple with oversize zippers, metal studs and interesting cuts that give a sculptural effect to skirts. The library of fabrics ranges from crepe silk and cotton jersey to stretchy silk and faille.

“It’s rooted in a simple elegance,” he said. “We try to take classic dress shapes and put our twist on it.”

That twist worked with retailers such as Neiman Marcus, Net-a-porter and Intermix, which carry the styles retailing primarily from $400 to $600. Thanks to his role as cofounder of fashion marketing company Saturday Group with Erik Torstensson, Grede has called on top models Rosie Huntington-Whiteley, Suki Waterhouse and Erin Wasson to shimmy themselves into the designs for a runway show and fashion campaigns. Sales have already surpassed $1 million a year.

For customers searching for an alternative to the LBD, the fall collection’s 40 stockkeeping units also include tuxedo pantsuits and soft colors like pink and ecru.

“I just didn’t think anyone was doing — how should I quote — ‘affordable evening,’ ” Grede said. “We really wanted to own the night.”