Traditionally a fixture during Paris Fashion Week, with buyers from around the world strolling the aisles between shows scouting for new discoveries, both Tranoi and WSN, the organizer of the Who’s Next and Première Classe events, respectively, have been forced to adapt to rapidly changing regulations in France that have limited public gatherings and halted all but essential international travel.

“Buyers and brands cannot move easily to Paris, the idea was to go to them,” said Tranoi managing director Boris Provost.

The concept is designed to draw attention to the Tranoi Link platform, a product-focused social network connecting brands and buyers that launched in January.

The schedule features a calendar of video presentations giving viewers a peek inside the studios of brands and designers based in Paris and Milan — they number 28 with a mix of well-known labels and young designers. There are also webinars as well as Instagram Live sessions with retailers throughout the three-day online event.

“The audience of Tranoi is 80 percent international,” Provost explained. With the current restrictions, by hosting a physical event, “we would not be able to gather enough people to make business. We want to support the development of this platform first. We believe Tranoi Link is a more efficient tool.”

There are 800 buyers and 200 brands registered on the platform, Provost said. “We are at a key step to develop the audience.”

Paris-based Coralie Marabelle is one of the designers who welcomed the Tranoi team into her studio for filming. Her video debuted Friday morning.

“This year has given us the opportunity to innovate and to imagine new ways of presenting our collections,” Marabelle told WWD. “We need to multiply the points of contact and try to reach a maximum audience through digital. Taking part in the Tranoi presentations allows us to gain visibility, because the presentation will be broadcast to a large audience of buyers. Our aim is to develop our network of buyers and to grow the brand both in France and internationally.”

The closure of retail spaces of more than about 200,000 square feet at the beginning of February scuttled WSN Developpement’s plans to partner with Paris’ department stores to stage a scaled-back version of a trade-show format. The organizer implemented a “Plan C,” deciding to create a showroom in its offices in the Saint-Germain neighborhood, with a selection of 50 brands, instead. The event opened today, and runs through March 8.

“Since the beginning of this crisis, I’ve always been in favor of maintaining physical events,” said Frédéric Maus, general director of WSN Developpement. “We succeeded in holding a show in October, we were the only ones to do so, and we know how important that was for people, both brands and buyers. It was essential to maintain a physical event.”

His priority was providing a solution for brands who rely on the format to recruit new buyers. “There are a lot of brands that don’t have an alternative solution,” he explained. “We did this for the people that really needed a place to meet their buyers.”

The scaled-back format houses Première Classe, which focuses on accessories, and brands were selected on a first-come, first-served basis. 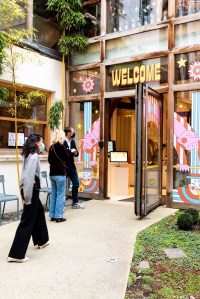 “We limited the space per brand to a strict minimum, and we are lucky that our offices are big,” Maus said.

“I’m in the process of relaunching my brand,” said Laëtitia Ivanez, owner of Les Prairies de Paris, one of the brands showing at Première Classe. “I need to reconnect with buyers, to show my work in real life at a time when making contacts is complex and there is little visibility about the future.”

Maus admitted his surprised that buyers that had signed up in advance — each is allocated a one-hour slot for their visit — were more geographically diverse than he anticipated. “We have buyers from all over France, and even some Europeans who are allowed to travel for work, and that has surprised us.”

Some 530 had booked a slot in advance of the showroom, which runs through March 8.

At least in the immediate future, new and hybrid trade show models look to become the norm.

“Even if we are able to host an event in September, which we hope we will be able to do, we know that all the buyers from all over the world will not be able to come to Paris, so we will have to mix a physical event with some digital options,” Tranoi’s Provost said.

WSN is banking on opening its shows in September too, but is also keen to develop new formats. Its crowdfunding project with Ulule, launched last December, has seen 150 brands sign up. The project is intended to help finance and support young designers and fashion companies. It also has Drop, an event focusing on Millennials, in the works.