Retailers stocking up for fall. 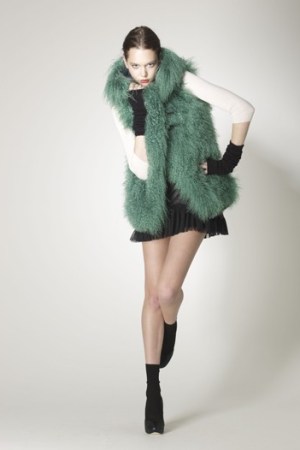 Retailers stocked up because many were caught scrambling for outerwear during the unusually cold winter. Leather jackets and fur trims were especially popular.

But Resnick is advising her 62 retail accounts to cut spending and “keep money open to pick up new things that come up at the last minute.”

FIG management was pleased with the show.

“Attendance continues to increase and we happily welcomed over 50 new stores to our venue,” said Megan Bullard, marketing coordinator.

Greg Mider, whose Mider Group agency represents Autumn Cashmere and other labels, said, “Business is noticeably better, so I’m glad. I’ve seen a lot of good stores here like Julian Gold, Balliets and little guys from New Orleans, Jackson, [Miss.,] Michigan. We’ve also been seeing a lot from the Northwest this past year.”

Callie Saitowitz said she closed one of her two BB1 Classic stores in Houston last year, but gross sales are up.

“It’s the best thing I could have done,” Saitowitz said.

She watched prices, having noticed that women will buy two or three pairs of pants ticketed under $200 compared with one that’s over $300. She’s also more careful about carrying brands that are exclusive to BB1.

Beth Griffith, owner of Fashion Post in Jackson, Miss., has retooled her 30-year-old store to cater to mothers of the bride and is moving the shop to a more prominent location within her shopping center.

“The bridal shops work with the brides and bridesmaids, but the mother is lost,” she said. “We are busy every single day. They are driving in from out of town for it.”

Marcy McCoy, owner of Marcy & Abbey’s, spent the same as last year because she’s moving her store into Oklahoma City from suburban Edmond in hopes of capturing more clients.

“I’m hoping to see higher-waist pants,” she said. “Oklahoma is very conservative. Everyone is casual.”