Despite tough economic times, shows are upping their fashion ante to generate interest. 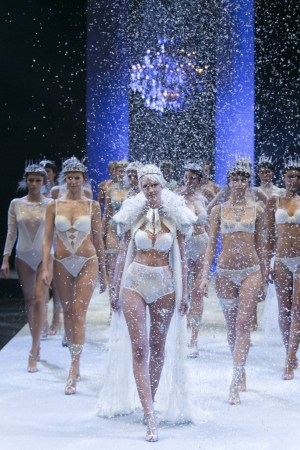 PARIS — Despite persistent economic challenges, trade show organizers in Paris are forecasting attendance for the first half of 2014 is going to be at least on par with 2013.

Many shows under the Paris Capitale de la Création umbrella, the collective that groups many of the French capital’s leading trade shows and events in fashion, accessories and design, are upping their fashion ante to generate interest. Initiatives include a new venue for Tranoï Preview and Capsule Paris Women’s in hip neighborhoods, a new visual identity for Texworld, an easier navigation for buyers at Who’s Next and Salon International de la Lingerie, which will introduce a dedicated area for men’s underwear.

The shows are to take place amid a lackluster retail climate in France. According to data from the French Fashion Institute, or IFM, sales of apparel dropped 2 percent in the first nine months of 2013.

Grau expects 2013 apparel sales to fall 2 percent, marking the sixth year in a row that the French market will seeing a volume decrease, he said.

“The luxury end of the market is holding up, though,” said Grau. “The luxury client is mostly made up of foreigners, therefore the luxury market generally follows the exports numbers.”

Exports are a sweet spot. French women’s apparel exports to Germany, for instance, jumped 26 percent in the first six months of 2013 and were up 16 percent to China, according to the IFM.

One change to the Paris scene comes from Who’s Next Paris, slated for Jan. 25 to 28. There are about 2,000 brands, split equally between apparel and accessories. New this year, the rtw offer will no longer be divided into three areas: Only Fame, which houses 200 women’s brands, will still have a dedicated area, while the offer of Private and Mr & Mrs Brown will be reunited under the Who’s Next Ready-to-Wear banner. The same holds true for accessories. Three prior areas of accessories will be grouped under the banner Who’s Next Accessories, with only Premiere Classe, housing some 300 brands, getting a dedicated area.

“We have got two big families with one area dedicated to creative universes in each to make the show easier to navigate for buyers,” a spokesman for the show explained.

Last year, the show attracted around 57,000 visitors, and organizers are hoping attendance will be on par this year.

The big change for Bijorhca Paris is to come in the second half of 2014. The international jewelry exhibition, to be held from Jan. 24 to 27, will push back its second edition of the year from July to September to better coincide with fine jewelry buyers’ calendar.

“After two seasons of holding the show in July, we are moving it back to September as we saw a decrease in the attendance,” said Richard Martin, the show’s deputy director and artistic director. “We want to redevelop our gold, jewelry and watches activity.”

Michael Scherpe, president of Messe Frankfurt France, the organizer of the Texworld and Apparel Sourcing shows that will run simultaneously from Feb. 17 to 20 at Le Bourget, cited more confidence among participants as Europe’s economies continue to show signs of improvement.

Texworld and Apparel Sourcing attracted around 12,150 visitors last year, 85 percent of which were from outside France. He said initiatives like a new, more fashion-oriented visual identity developed by Paris-based agency Belleville would help the show to have an uptick in visitors this February.

Tranoï Preview, which features brands that produce both men’s and women’s collections, is to take place Jan. 25 to 27 in a new venue. After two editions at the Carrousel du Louvre, the show is moving to Garage Turenne at 66 Rue de Turenne in the Marais district. Tranoï’s main men’s salon will be held from Jan. 18 to 20 at the Bourse. Visitors have access to both shows with a single pass.

The Capsule Women’s show in Paris, scheduled for Feb. 28 to March 2, is moving to a new venue too, decamping from Cité de la Mode to Tapis Rouge, a building in the 10th arrondissement that was home to a department store in the 19th century. The Capsule men’s wear show will continue to run in Cité de la Mode. The next show is scheduled for Jan. 17 to 19.

Salon International de la Lingerie will take place at the Porte de Versailles with a three-day run that begins Jan. 25. In 2013, the show attracted 16,372 visitors, down 12 percent compared with 2012, a drop attributed to snowfalls in Paris, and a stable number of exhibitors at 550 exhibitors.

Séverine Marchesi, the show’s director, expects numbers on par with last year and around 500 exhibitors, including new brands such as French label Jolies Mômes. New this year will be a dedicated area for men’s underwear dubbed Lord featuring brands such as Olaf Benz. SIL has named Spanish designer Andrés Sardá as lingerie designer of the year of Paris Capitale de la Création 2014. Meanwhile, SIL’s sister event, Interfilière, is to give a good play to embroidery this time around, said show curator Laurence Nérée.

Première Vision, with a three-day session running Feb. 18 to 20 in the Paris Nord Villepinte fairground, expects to maintain its position as a key upscale fabric fair. The show is bringing back its Maison d’Exceptions, an enclosed area showcasing about 15 international companies boasting special manufacturing techniques. After launching the initiative in 2011, it plans on holding it during every February edition.

“The surprise came from Italian and Spanish visitors, up 11.2 and 9.7 percent, respectively, who, despite a very uncertain economy, find what they need at Première Vision for their revival and development,” show organizers said.