The new line is PFI's first foray into kids' apparel as a fashion brand. 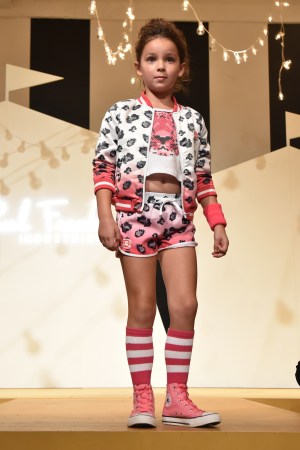 Paul Frank Industries’ creative teams know how to put on not just one, but two shows, in quick order.

The teams had their first PFI children’s fashion show for spring 2016 on Sept. 10 at The Hudson Mercantile during New York Fashion Week. And while the design team focused on the new kids’ apparel line, the marketing team pulled off a circus backdrop that was a show all on its own. The event was to showcase the repositioning of the Paul Frank brand from a character-content focus to a fashion brand.

PFI is part of the Saban Brands Lifestyle Group. Both SBLG and sister division Saban Brands Entertainment Group are part of Saban Brands, which is owned by Saban Capital Group.

The family-friendly extravaganza — which included games, aerialist performances, face-painting, stilt walkers and snacks — is believed to represent a substantial marketing investment behind the brand. Haim Saban, chairman and chief executive officer of Saban Capital, would only confirm that the company is making a “huge investment” in PFI. Industry sources said the investment is close to $1 million to reintroduce PFI as a fashion-focused label.

Stan Wan is the creative director for SBLG. He also worked with the design team on the apparel product line. According to Wan, the group was designing for the spring show as they were also discussing concepts for fall 2016.

Bill Kehoe, chief financial officer of Saban Brands, said the group had “just a few weeks to pull together the concept of a circus backdrop” for the fashion show. He noted that the idea for the apparel line was due largely in part to the creative vision of Daniel Castle, managing director at SBLG, whose main focus is on strategic business development.

Guests at the show ranged from retail executives, such as Stephen Rector, vice president, omni-merchandising manager for girls’ apparel, kids’ season and kids’ furnishing at Macy’s, to designers, such as sisters Danielle Snyder and Jodie Snyder Morel of the Dannijo jewelry line and Rachel Zoe. Also present was model Coco Rocha. Internet celebrity Shih Tzu, Marnie the dog, who routinely makes appearances with celebrities and has over 1 million followers on Instagram, was in attendance as well.

Overall, the looks for the kids were cute and colorful, as well as a bit edgier than what’s available in the market. The line, which targets kids between ages 4 to 8, no longer has Julius the Monkey front and center, although a monkey logo does appear on some items in select spots much like the green crocodile logo that appears on the Lacoste piqué polo shirts.

Coca Rocha, who was there with her five-month old daughter Ioni, said, “It’s refreshing to have a really fun party….Too bad they don’t make baby sizes. I like the fact that little girls were not wearing pink and little boys were not wearing blue. I like the black and gold options. You don’t need specific colors for the kids just so you are able to tell them apart.”

Wan, the creative director, said one theme that’s been floated for next season is hip-hop, although nothing yet has been decided.

Janet Hsu, ceo of Saban Brands, said the company is in a “unique position in the marketplace, with its licensing and merchandising background, to push further on brand development” for the apparel offerings in the lifestyle group. She noted the different multidimensional touch points, such as mobile and digital, that will help communicate the message about PFI’s repositioning as a lifestyle apparel brand.