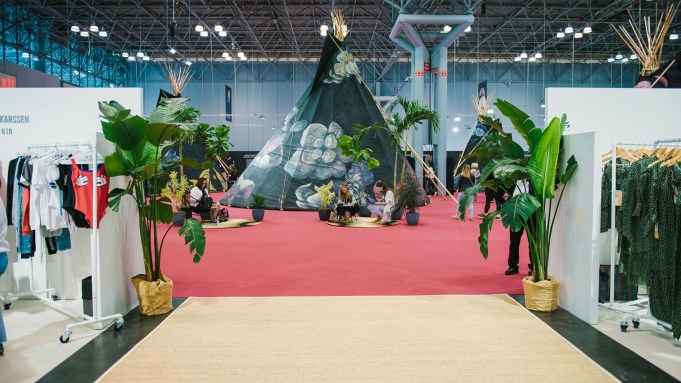 The show is part of a significant restructuring of the New York trade event calendar, and replaces Intermezzo, which historically took place in May, August and January. UBM Fashion is also introducing a dual-gender fashion trade show in July and January.

[Pre]Coterie featured a highly curated show of 250 brands, about a quarter of what’s generally at Coterie. There were no private booths, and exhibitors were selling fall and early spring merchandise.

Tom Nastos, president of men’s and women’s apparel at UBM Fashion, said Monday, “We had a great day yesterday. It’s being embraced. We did an analysis in advance and the timing has worked out great. Traffic’s been strong.”

Retailers surveyed Monday had mixed opinions about the June timing of the show and said it was difficult to be out of their stores at this time. A few said they preferred the previous May and August show dates, especially as an efficient way to do fill-ins (in May) and to have a better indication of how fall was selling (in August) before committing to resort and pre-spring merchandise.

Nonetheless, the show was attractive and easy to navigate. The Coterie Experience, which launched in February 2017, returned on a grander scale. There were floor-to-ceiling teepees, that featured immersive displays that combined branded content with striking decor. The themes of growth, change and disruption were conveyed via butterflies and vibrant exploding florals. “Retailers can come through and learn about brands,” said Licata. The teepees were conceived by Licata and Valentino Vettori, who creates interior spaces for retail stores (valentinovettori.com). Retailers were able to come inside with iPads and experience everything inside the displays, seeing the product in a highly creative and innovative environment.

“To launch a new show, we need to create a different experience so people will remember it. It brings it to an artistic level,” said Vettori. “The teepee represents that we are all part of a tribe and a community,” he noted. He said retailers have been coming through and taking pictures of the displays and sharing them on Instagram. Each teepee is based on a different idea at the show.

A few retailers and exhibitors surveyed said the June show dates would take getting used to.

Kati Edwards, vice president of merchandising at Stein Mart, the 290-unit off-price retailer based in Jacksonville, Fla., found the timing a little off. “We’re not really looking at spring 2019, we’re trying to tie up resort. We booked fall and want to see what happens with fall,” she said.

Edwards, who is based in New York, said she was at [Pre]Coterie looking for validation. “It’s good to get color direction and print direction. It’s such as a fashion- and color-driven store.” She said if she sees something they’re missing, they can fast-track an order.

One retailer who asked not to be named said she wasn’t happy with the June dates. “Retailers want to be in their stores now, and kids are getting out of school and May is a better time,” she said. She said she used to like the May show to do fill-ins and buy extra things.

Sheri Schorr, owner of Lester’s, the five-unit retailer with stores in Manhattan; Brooklyn; Rye Brook, N.Y.; Greenvale, N.Y., and Westport, Conn., said she was shopping for holiday/resort at the show and saw merchandise for Sept. 30 and Oct. 30 deliveries. She was hoping the show would have more exhibitors. “It’s very small,” she said. She said she was looking for things that are fresh and on trend.

“It looks like Paris, with all the installations,” said Lori Friedman, co-owner of Great Stuff, which has stores in Westport and Greenwich, Conn., Larchmont, Rye and Chappaqua, N.Y., who was excited about the decor. “We’re looking for resort and a mop-up of what looks new,” she said. Among the brands she’d be looking at was Jet by John Eshaya. “We’re always looking for more sweaters and whatever is new and good,” she said.

Smadar Yona, owner of Anik Boutique, a store on Third Avenue and 77th Street in New York, said, “It’s nice to have this show in between and it’s not overwhelming.” She was with her buyer, Robin Gruber, a fashion buying and merchandising consultant, and they were looking for dresses for immediate delivery, great going-out tops and new resources.

Daniele Chemla, president of Avenue Montaigne, a contemporary pants resource, said she was doing well with her sequined pants for resort, which came in such shades as black, silver, gold and white. She also was doing well with seersucker for resort and denim striped pants. For resort and spring, she was adding a lot of brights. She said she preferred having trade shows in May and August.

“August makes sense. She said retailers can buy resort and are ready to see spring. “In June, stores are still selling the spring line. June is really for top designer brands, not for ready-to-wear. I think retailers are confused,” she said. She said the May show was good for reorders and fall immediates. “It’s a little early in June and too late for reorders,” she said.

Nevertheless, she said she was happy to be at the show, but felt that they shouldn’t have taken away the other shows. Basically, she said stores are not ready to see resort. They’re not done with spring selling.

About 20 percent of [Pre]Coterie featured international brands. The show had a collection of high-end brands from Latin America, including Brazilian brands Charmosa, Skazi, Adriana Degreas, among others. In addition, the Cartagena shopping destination, St. Dom, had curated a selection of Colombian swim and resort brands, including Oropendola, Baletti, Renata Lozano, Moda Zeta and Lobo Rosa.

Eric Gordon, president of Riley, said he was doing well with his repurposed vintage line. He said the brand was a relaunch for the company, which had operated in the early Aughts. He was getting good play with a lot of their military jackets, jeans and sweatshirts. The collection wholesales from $60 to $895 for a leather jacket with studs. Everything is made in Los Angeles.

Lisa Smith, owner of Orlando Vintage Clothing & Costume, based in Winter Park, Fla., said the show was excellent and gave her collection “a lot of exposure and new clients.” She was seeing action in vintage from the Fifties which she attributed to “The Marvelous Mrs. Maisel,” the comedy-drama TV series starring Rachel Brosnahan. “Plaids are really doing well and things with lots of detail,” said Smith. She said she gets her inventory from original owners. “People contact me because I have a brick-and-mortar store,” she said. She said she sold several pieces to a jewelry designer who bought a Twenties sequined piece with netting, a Fifties hand-painted skirt with sequins and a Seventies butterfly cut disco blouse.

Peter Berta, director of sales for Coterie and Project Women’s, said there were about 20-22 vintage vendors. “It’s an opportunity to introduce retailers to vintage. They can layer it into their assortment and put their thumbprint on their store.”

He said stores love the new look of the show and the way they organized the show into neighborhoods. “There’s always a transition period. Stores are in town and this week’s never had a trade show to service it,” he said.