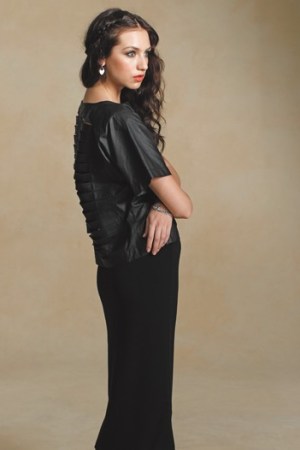 Project is rethinking its purpose as it emerges from the challenges that beset the fashion and retail industries during the recession.

“So many brands and retailers went out of business,” said Andrew Pollard, president of Project, the three-day expo that kicks off Monday at the Mandalay Bay Convention Center in Las Vegas. “I think our industry has changed forever and I think the way we do business has changed forever. We can inspire people a little more, inspire them more creatively and educate them. I think we’re an industry that is undereducated, highly creative, so we can avoid some of the fatal mistakes that happened in the past for our industry.”

Pollard’s solution is to create a platform that emphasizes community, education and technology. In addition to seminars on social media, Project is hosting a resource center where attendees can learn about international exporting. It’s also unveiling a digital showroom for Michael Bastian for Gant, a first-time exhibitor. Rather than pulling clothes off the racks, visitors can place orders for the men’s line on computers displaying digital look books.

“The consumer is all digital today, trade shows are not,” said Pollard, noting that he hopes to add more digital showrooms in future editions.

Such grand efforts squeezed into three days might appear to detract from Project’s primary purpose, which is to introduce exhibitors to new retailers and write orders. Pollard insisted it’s all part and parcel.

“Writing orders is a very important part,” he said. “The education and inspiration are equally important. As you work on inspiring the industry, educating the industry, presenting new and innovative brands and ideas, you stimulate people. You help evolve and transform the industry going forward.”

Every bit of information could help. Retail is such a tough environment right now that retailers are placing greater weight on their profits rather than relationships with vendors, according to Jeff Rudes, chief executive officer of Los Angeles-based premium denim company J Brand.

“If you’re not selling at retail, they are cutting out your floor space,” Rudes said. “That’s survival of the fittest. Relationships are important, but in a very tough business environment, it is about the bottom line.”

Pricing is still a priority. As costs have been rising, vendors have been pressured to keep their prices the same at the risk of shrinking their profit margins even more. Furthermore, in the past 18 months, some major retailers have been increasing their markups to give themselves a cushion when they hold their ubiquitous sales.

Project also aims to be a gateway to the U.S. market for foreign brands.

Paul & Joe Sister, the contemporary offshoot of French designer label Paul & Joe, strives to grow its U.S. business to department stores beyond the 60 specialty shops here that make up 3 percent of the company’s sales. Retailing from $150 to $600, the six-year-old brand hopes to use its vivid prints and quirky classics to attract buyers who want to spice up their shops.

“There’s a trend for people looking for new stuff and they’re willing to take the risk,” said Julian Haggiag, Paul & Joe Sister’s vice president of wholesale and retail operations in the U.S.

The influx of buyers at the trade show gives an audience to new brands.

Aether Apparel, the Los Angeles-based men’s outerwear company, is entering the women’s market this fall with three key pieces it thinks every woman should have in her closet: a lightweight hoodie, a ski jacket and a raincoat. Retailing from $65 to $595, the women’s lineup also includes three knit tops cut out of slub cotton, Supima cotton and Modal.

“Our respective wives and wives’ friends started taking our garments and asked, ‘When are you going to make women’s?’” said Jonah Smith, who started Aether two years ago with Palmer West.

Smith said the company listened to the women when they fine-tuned the designs. For instance, for the three-layer seam-sealed jacket that functions as a technical ski coat, it increased the lining to 200 grams of Primaloft from 133 grams after female testers complained it wasn’t warm enough. Louis Boston and Blue Bee in Santa Barbara, Calif., have picked up Aether’s women’s apparel.

Bishop of Seventh, a premium denim brand in Los Angeles, is introducing shirts this fall. Wholesaling for $60 to $70, the debut grouping includes yarn-dyed crop tops with asymmetric pockets and plaid tuxedo shirts trimmed with fake leather patches and bibs.

Chachi Prasad, Bishop of Seventh’s co-creative director, said the new shirt division will help the company increase sales by at least 15 percent this year, amid slow growth in denim.

Qi, a cashmere knit line based in New York, is spinning off a contemporary sportswear label called Ainsley. Retailing from $210 to $900, Ainsley incorporates washed silk, wool, moleskin, stretch leather and tweed in the patch sweaters, belted vests, cargo pants and some 40 pieces composing its fall inaugural collection. Grooving off a Seventies vibe, the palette features heathered and marled colors.

In the premium denim sector, nondenim fabrics, wide-leg jeans and trousers will dominate the fall lineup.

J Brand is promoting bell-bottoms that swing as wide as 24 inches in the leg opening. Dylan George is increasing its selection of nondenim fabrics such as stretch flannel, acetate and 28-wale corduroy to make up 65 percent of the collection. The Los Angeles-based label is also interpreting the trouser trend with black leather trim on the pockets, waistband and side panels.

“What I’m trying to do with the brand now is really dress it up,” said Daniel Guez, Dylan George’s founder. “You have to play with other fabrics and be different.”

The appeal of leather and the trend for mixing fabrics spurred KAS New York to integrate more animal skins after establishing itself with woven items made in India. In addition to vamping up fleece with leather, KAS also mixed wool with Lurex.

“That’s one way we can keep the pricing down and keep it fresh and new,” KAS founder Kirat Anand said.