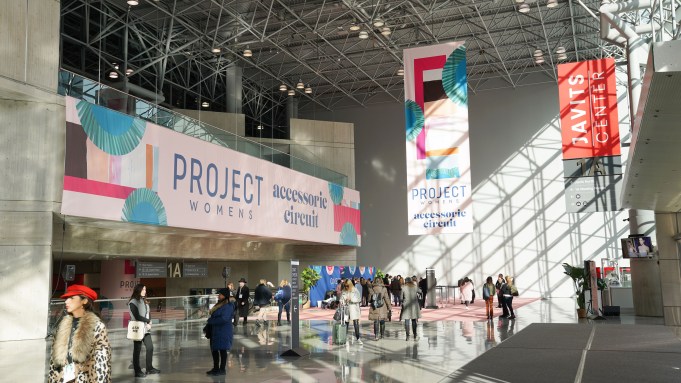 The three-day show, which closes today, features immediates and summer merchandise, spotlighting 150 vendors, many of which previously showed at the aforementioned Intermezzo, which no longer exists. Summery prints, colors and stripes were evident throughout the spring and summer collections.

Licata said they were pleased with the pace of business so far.

“Attendance was up 10 percent through Monday,” said Licata, referring to all the shows taking place at the Jacob Javits Center under the UBM Fashion umbrella, which includes Project Womens, Accessories The Show, Accessories Circuit, Fame, Moda and Children’s Club. Among the new neighborhoods at Project Womens were Canvas, featuring gift, home and lifestyle such as apothecary, beauty, stationery and tech accessories, and Oasis, which has emerging designers in apparel and accessories.

Licata said the reason for the trade show’s name change from Intermezzo to Project Womens was that there were too many brand names, “and we thought Project would resonate with the New York market.” The next Project Womens is in August. (The first was last July.)

Marie Fischer, owner of Nalu Dry Goods in Bay Shore, N.Y., was seeking beachy items and cover-ups at Project for her surf shop. She said she was buying things at Free People, where she saw some new silhouettes and looks that are throwbacks to all decades. She was interested in some of their gauzy and eco-friendly styles. She was looking to bring in prints and stripes and liked what she saw at Saltwater Luxe, which she described as a throwback to Billabong but more elevated. With her store being in Bay Shore, she said she’s able to cater to the customer who’s about to take the ferry to Fire Island. “If they missed a ferry or forget something, they’ll shop,” she said.

Chuck Mallett, president of Gus Mayer, which has two stores in Nashville and Birmingham, Ala., said, “For us, it’s all about differentiation. It’s more and more challenging to do that.” He said he was wide open for immediates and was shopping for sportswear, which at his store is very designer driven, along with bridge sportswear and contemporary. He believes that there are too many trade shows and they need to be streamlined. “It’s makes it too difficult for a retailer. There are too many and they’re overlapping. There’s some opportunity there,” he said.

Rusty Lester, president of Frances Kahn, the Richmond, Va.-based women’s clothing retailer, said, “There’s more fall than I thought there would be.” He said he was at the show looking for fill-ins, especially for accessories, and was seeing a lot of color in apparel, although his store tends to be more neutral. “We’re constantly looking for new brands in high quality,” he said.

“It’s a great refresher,” he said, noting that it’s important to stay in touch with what’s going on. He said Christmas results were pretty good, but the stock market crash hurt business. He said he caters to a lot of men who come into buy the women in their lives gifts. “When they come in, they get spooked a little bit.”

Lester said the stores do well with brands such as Lafayette 148, Rag & Bone, Herno, D. Exterior, Iris, as well as lot of Italian brands. Frances Kahn also does a very big outerwear business.

Exhibitor Julie Marder, founder of Sundays NYC, said she opened up 12 new accounts at the show on Sunday. She preferred Project Women’s to Intermezzo. “I think it’s better. My location happens to be prime,” Marder said. She was selling summer merchandise, and doing well with rainbow ath-leisure looks, gauze items, printed, feminine skirts and city track suits. She said she brought a little bit of immediates to the show, but was launching her summer line here. “Anything with a touch of feminine ruffles is selling,” she said. She said buyers were looking for things that stand out. “It’s a short window to buy this product. We want to make a statement.”

She said she’s maintaining prices on her collection. “It [our collection] is geared to shop local and specialty stores. We really have to be consistent and partner with them,” she said.

Daniele Chemla, owner of Avenue Montaigne, the pants resource, said she was having a good show. “Yesterday was great and we had a lot of traffic. I was nicely surprised.” She said the company’s prints were really doing well, as well as plaids. “Soft denim, seersucker and stripes were doing well,” Chemla said. For spring, pants wholesale from $85 to $135, with the average being $100 to $115.

Misa Los Angeles was having a busy show, especially with immediates. The company, which sells a lot of printed, feminine dresses, introduced some new categories for summer, such as tops and pants.

Trina Turk, who was showing at Project Women’s in New York for the first time and normally shows at Coterie, was doing well with summery, special occasion dresses for weddings, including ruffled and printed dresses. They were also selling a lot of novelty shorts and jumpsuits. Rosa Bellwood, senior account executive at Trina Turk, said traffic was steady on Sunday and they had a lot of walk-ins and opened new accounts.

“Trina Turk is known for bright colors and prints and people come to us for spring and summer. That’s what we’re definitely known for,” she said about the Los Angeles-based resource.

Peace of Cloth, which is known as a pants resource, introduced knitwear at stores last July. The company’s knits wholesale from $48 to $105, and the T-shirts range from $24 to $57. “We’re getting a good reaction. We’re selling to better specialty stores and we do some private label,” said Jaime Nortman, director of sales. She said she liked the layout of Project Womens. “It’s a nice show. The layout is all uniform. It’s more focused and it’s clearer and easier for the manufacturer and the retailer,” she said.

John Eshaya, owner of Jet by John Eshaya, said he didn’t have a read on the show yet. For summer, he was selling cute, easy simple shapes, and sold a lot of loop terry and shorts, as well as matching tops and bottoms. “We sold tons of tie-dye,” he said, as well as crop fuller shapes on top and loose and baggy bottoms. He was selling crop denim and crop jeans, and “anything with a sport tape on the side was still selling.” He said athletic and sweat outfits were still selling. “Nothing new has evolved yet, people are still staying super safe,” he said. When told that retailers keep saying they’re looking for newness, he said, “We show them new, and they buy the same stuff.”

Eshaya said he preferred the Intermezzo name, and felt the show looked and felt exactly the same to him. “To do something different, you have to change the whole story,” he said.