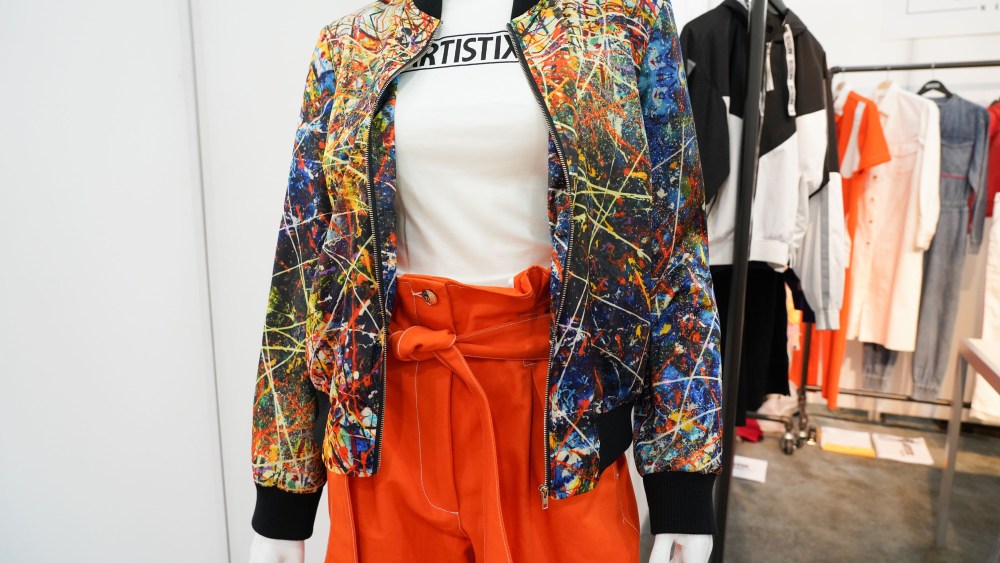 Project Womens wrapped up its three-day trade show Tuesday, focusing on contemporary and lifestyle fashion for immediate delivery and holiday. Some exhibitors also got a jump on spring.

“Moda, Fame and both Accessories shows were steady with traffic as we are seeing the buyer in this market looking for more affordable price points and immediate fall products. The August show is smaller in terms of number of brands from the Project Womens/Intermezzo brand portfolio but larger in Accessories and Fame which fits the needs of the intermediate show retailer,” said Danielle Licata, president of East Coast Women’s at Informa Markets Fashion Division

Exhibitors said traffic was slow during the show, and a few complained that there are just too many shows happening around the same time. While Monday did see a lot of activity, by Tuesday, the action had slowed considerably.

“We’ve been very busy and steady, but traffic is incredibly light,” said Lyn LeKay, sales director of Gretchen Scott. She believes there are just too many shows happening at the same time. She said in close succession was the Miami Swim show, Chicago Gift Market, Atlanta Apparel show and Project Women’s.

She said they were showing resort and immediates for fall and holiday. She noted that fall plaids have been doing very well for the company. “We had it last year and it’s a great seller for us. We added velvets for holiday and an equestrian print,” she said.

Natalie Kleinman, domestic sales manager at Rails, said the show was definitely small, but she saw a lot of their specialty store buyers. Rails launched spring at the show and was doing well with linen and rayons and novelty prints, as well as midi dresses. Produced in China, Rails’ shirts and dresses wholesale between $67 and $98. “Everyone’s just waiting,” she said about the proposed tariffs and the impact that will have on prices.

Roger Joseph, a consultant to Calla Box, a Mongolian cashmere firm, said, “Business has been fantastic.” He was selling spring and said stores were leaving paper. He was doing particularly well with lightweight sweaters and pants and fine-gauge sweaters, all made in Mongolia. The color palette of the line is chalk, ivory, khaki and blush pink. The collection, with a Jan. 15 delivery, wholesales from $100 to $300. “We will add pops of color for the second delivery,” he said. Joseph said many specialty stores came by including Galley Couture, Monique, The Westside, No Sugar and United Arrows from Tokyo. The collection, which makes its silks in China, “changed its pricing in anticipation of the tariffs,” he said.

Hi Gorgeous was having a busy show with holiday merchandise. “The first day was a little slow, but yesterday was very busy,” said Marina Kievsky, owner, on Tuesday. She said one of her bestsellers was a camouflage jacket that said on the back, “I Am Better Than a Phone. Talk to Me.” She was also doing well with camouflage jackets with feathers, and graphics on the back that said, “Love Is the Answer.” That jacket, which she said was practically on every order, wholesales for $82. Another hot seller was silver sparkle pants and top for $68 and $64, respectively.

Artistix was showing its art-inspired streetwear brand. Key styles were paper-bag pants and overalls, according to Sean Macdonald, sales director. “People are liking our pants and shorts and the lighter-weight jackets did well,” he said.

Jet by John Eshaya was selling pastels, along with tie-dye pastels and ditsy florals for resort and pre-spring. John Eshaya noted that skirts are doing well. The company makes its entire line in California, but uses Chinese fabrics, whose costs will be rising. “I’m trying not to raise prices. We’re going to absorb price increases so the prices stay the same,” he said.

Walter Baker was having success with soft dressing in floral prints. The company was selling immediates through Dec. 30 delivery. The company produces most of its line in India. Leather jackets wholesale for $340, while dresses are $113, according to Monica Forman, sales and marketing director.

“The uniform is the printed dress and leather jacket. That’s what every girl wants,” said Walter Baker, owner of the firm.

“We’re writing a lot of orders and opening new accounts,” said Olivia Garzona, sales assistant at Roller Rabbit, which was selling its holiday and cruise collection at the show. Its two best categories were women’s apparel and pajamas. The company has been expanding its dresses, cover-ups and tunics. It also does well with transitional pieces that go from the pool to out for dinner, she said.  Everything is hand-printed in India.

Surprisingly, DL 1961 was one of the only denim firms at the show, and focused its sales on fall and resort. “A lot of people are looking for novelty items, such as cheetah leopard in pants and coated denim which looks like leather,” said Melissa Richmond, account executive. The line wholesales from $78 to $91.

Mylo Dweck, owner of Mylo on Second, a specialty store in Brooklyn, said she was shopping the show for resort merchandise for Oct. 1, Nov. 1 and Dec. 1 deliveries. She said she liked the tie-dye and dip-dye and Lurex details at Bella Dahl for resort. Since her store is a modest clothing boutique, she said, “They like to be on trend, but covered.” She also liked Walter Baker’s “gorgeous chiffon prints,” in dresses, which have high necks. Dweck liked the fact that the show was low-key. “It’s quiet, nice and relaxed to place your orders.”

Cathi Saunders, buyer for Bodyburn Barre, a barre studio in Tenafly, N.J. that carries clothing, said she saw a lot of great sweaters and woven shirtings in the market, and “great soft dressing mixing in sportswear and athletic clothing.” She said she was looking for cashmere sweaters to wear with cool leggings.

“We loved Brodie. We try to buy novelty and brands that are not in department stores, and we pick things that other people don’t have.” She said she was writing holiday and resort at the show. “We come to all the shows. When business gets busy, you need more merchandise to fill in.”

Dale Cotton, executive sales agent of Brodie Cashmere, said he was selling novelty and color for spring. In addition, he was accommodating fill-ins. “Surprisingly, it’s been more active than we thought,” he said.