The corporation quietly supports charities such as Team Izod and Ronald McDonald House. 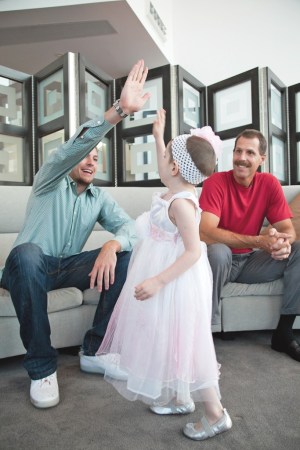 Informa Markets Fashion Sets Agenda for 2021, a Mix of Digital and Live Events

Unabashed as PVH Corp. is about marketing its brands, the conglomerate is considerably more low-key about its philanthropic efforts.

For the past six years, the company has been quietly supporting the Team Izod Youth Leadership Basketball program, which is meant to be a safe house for boys between the ages of 10 and 17. These elite players and potential college scholarship winners receive mentoring, tutoring and life-skill coaching from an assortment of professionals and former NBA players.

There are currently 70 boys from New York, New Jersey, Connecticut and Pennsylvania participating. Darryl Dawkins, who is best known for his days with the Philadelphia 76ers and the New Jersey Nets, is involved with the initiative. Even though PVH does not market its involvement, the company’s support is invaluable, according to Eddie Bright, president and general manager.

“I cannot put into words how PVH helps. They don’t do this to help themselves. They do it because they see these kids’ potential and want to have a positive effect,” he said. “They do this because they actually care and they recognize the opportunity to make a difference.”

Thirty-five participants have gone onto college since the program was started. Aside from developing their basketball skills, the initiative teaches the boys the importance of education, etiquette, social media skills and how to deal with being confronted by authorities, among other things.

“We teach them to tie up their shoes, not to wear a hat indoors, how to shake a person’s hand, how to introduce themselves and other tools for life. We teach them that how you are in school and who you are as a person is more important than how long you play basketball for,” Bright said.

These services are provided to families for the nominal fee of no more than $35 a night.

PVH’s president Allen Sirkin will help gather friends and newcomers for the group’s Third Annual Celebrity Golf Tournament, which will be held Aug. 13 at the Ridgewood Country Club in Ridgewood, N.J., the site of the 2010 Barclays Tournament.

Last year, Sirkin and former New York Giants Carl Banks and Karl Nelson; former New York Met Ron Darling; Golden State Warrior David Lee; NFL Hall of Famer Lynn Swann, and former outfielder Kenny Lofton helped raise $400,000 for RMHNY. As a co-chair, Sirkin “by far brings in the most people from the industry,” according to William Sullivan, president and chief executive officer of RMHNY. “PVH has been a tremendous supporter of this institution.”

With 84 rooms, the New York City chapter can house 300-plus people at any given time and it has helped 30,000 children since its inception in 1978. There are more than 200 Ronald McDonald Houses in the U.S. and 100 abroad. “As a cancer survivor himself, Allen has really embraced the charity. He came up here and toured our facility about three years ago and was very taken by it,” Sullivan said.

The East 73rd Street facility is the largest in the system and individuals and corporations provide the bulk of its funding, Sullivan said. In addition to Sirkin’s support, RMHNY receives some financial assistance and product for the golf outing from PVH. Also, Tom Murry, head of the company’s Calvin Klein brand, serves on RMHNY’s board.

In the months ahead, RMH plans to expand its reach by offering its services in New York City beyond Manhattan. There will be a concerted effort to offer hospital navigation services and music, reading, dance and other programs to more underserved areas, Sullivan said.