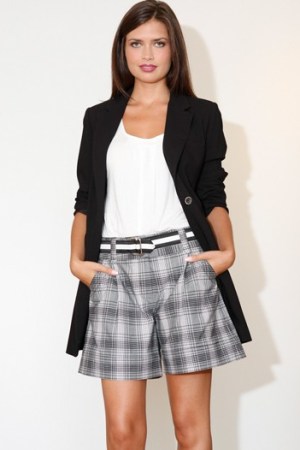 Rafaella’s first in-store displays weren’t even up yet in its top 25 Macy’s, Belk and Bon-Ton doors this month when Rafaella Apparel Group Inc. was focusing on how it could further grow its business and distribution.

Viewing the troubled economy as an opportunity to accelerate rather than cut back expansion, the Cerberus Capital Management-owned Rafaella is seeking strategic acquisitions. The search is on even as it launches a better-priced line called Ellavie for spring and works on the fall 2009 debut of the new Nicole Miller Chartreuse bridge sportswear line, for which it holds the license.

“Quite frankly, our retail partners are looking for something new, because the customer is tired of the same old and only opening her purse when she is excited,” said Rafaella chief executive officer Christa J. Michalaros. “The stores are giving us credit for being offensive when people are turning to defensive strategies. We’ve been through a lot over the last two years, but now we are staying the course and starting to grow again.”

Cerberus bought Rafaella in 2005 by issuing $172 million in public debt, and Cerberus said it planned to double the company’s sales to at least $500 million within a few years. For fiscal year 2006, however, Rafaella’s earnings fell to $6.3 million from $12.6 million, and sales declined 14 percent to $191.3 million from $222.2 million, which the company attributed to Macy’s Inc.’s acquisition of May Department Stores Co. because the brand was focused in May doors, not Macy’s.

Part of the brand’s growth push involves targeted online advertising and interactive marketing that launched at the beginning of this month. The company declined to release the marketing spend, describing it as significant but “cost effective.” The approach is grass roots: an e-newsletter with topics ranging from “how to look fresh after a six-hour flight” to “the modern woman on the go,” which profiles Michalaros and Rafaella president Rosemary Mancino as the executives whose lifestyle inspires the line; Facebook advertising, sponsoring conferences catering to female executives, and cooperative advertising with retail partners.

Michalaros said the change that the bridge sportswear floor has been undergoing for the last few years — transitioning from traditional, career-focused collections to modern, item-based lifestyle looks — is now happening on the better floor, and Ellavie aims to capitalize on that. The line starts with a pants foundation, like Rafaella, but adds colorful dresses, a boyfriend blazer and patterned blouses with a contemporary look.

“We have not taken a step back in design, even though we know what’s going on with the economy, while many of my peers are forced to play it safe,” said Richard Metzger, vice president of design for the Rafaella group’s brands. “Ellavie is the next step in the design process, and we are trying to challenge ourselves as to what is modern. We have to be happy and bring color with the economy — now is not the time to be austere.”

Michalaros hopes that Ellavie will add retail accounts, such as Nordstrom, Lord & Taylor and Dillard’s, to Rafaella’s distribution. The new Nicole Miller license will tap the designer’s distribution base, which includes Saks Fifth Avenue, Neiman Marcus, Bloomingdale’s and a huge base of specialty stores.

On the acquisition front, the company is open to different market segments — including down channel — and sales volumes, so long as there are back-office synergies and a clear brand DNA, Michalaros said.