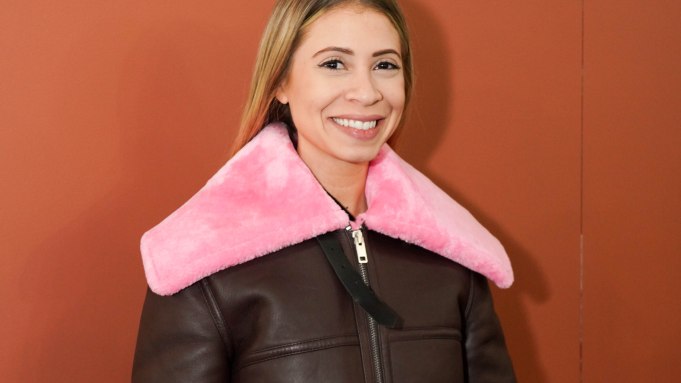 NEW YORK — Men’s wear-inspired looks such as mini-checks, glen plaids and herringbones; zebra prints; novelty sweaters, and sleeve details such as puff shoulders and balloon sleeves were some of the main trends to emerge at Coterie here.

“The timing to coincide with NYFW has been terrific, we have seen greater International attendance from stores such as Net-a-porter, Harrods, Galeries Lafayette, Printemps and Ron Herman Japan, among others,” said Colleen Sherin, president of Coterie. “There are over 1,100 brands exhibiting at Coterie  this season, of which over 200 are new brands.”

She noted that the Coterie panels on their Live Stage “covered topics ranging from the State of Fashion, New Retail Technologies, Monetizing Instagram and the Relevance of Recycled and Upcycled Materials. I look forward to growing our future programs and to introducing new initiatives to further develop and elevate the business,” said Sherin, who began Feb. 10.

John Eshaya, owner and designer of JET by John Eshaya, anticipated a lot more retailers coming to Coterie to place fall orders than he saw at Intermezzo in January, where he said traffic was slow. “Hopefully stores will be more forward and get new ideas into the stores. You have to reinvent your store every season. You can’t keep doing the same thing. The customer will go somewhere else to shop,” he said.

For fall, JET was doing well with non-print prints and saw a movement back to bohemian and Navajo.  “There’s lots more of an Americana story,” he said.

Daniele Chemla, owner of Avenue Montaigne, had a busy show and was doing well with narrow pants that can be tucked into boots, velvet and corduroy pants. She also added off-white and camel to her fall lineup. Among her new styles were leather pull-on skinny pants and wide-leg pants.

Walter Baker pointed to his shearling coats, which are made in India and wholesale for $408. They have fake fur that is bonded to the lamb. The jackets come in various color combinations such as pink with brown and navy with brown. Walter Baker, owner of the firm, also noted that the shirt jacket is a big trend and the whole sportswear aspect of leather is doing well for them.

Shoshanna had a busy show with its prints, as well as textured crepes. The company was also getting a good reaction to puff sleeve detail, along with its knit jacquard dresses and faux leather dress, according to Samantha Owens, sales manager. She also noted a lot of sleeve interest in tops, and said softer Lurex fabrics were retailing well. Their bestsellers were novelty fabrics.

Lucy Melton, national sales director of Black Halo, said traffic had been steady since the exhibition started. They just launched sportswear, ready-to-wear and evening separates that were doing well. Generally, dresses are the company’s bread and butter, but they’ve started offering more contemporary sportswear, such as tailored blazers and evening tops. Black Halo started selling the separates at Shopbop and is now rolling it out to more retailers.

Wildfox, the L.A. contemporary brand which was recently sold to Fam Brands, was having brisk sales with its basics, luxe sweatshirts and “go-to” graphics  such as  “Easy Does It,” “Save the Bees” and “Hug the Trees,” according to Shannon Martin, owner of the Village Showroom in Los Angeles.

Retailers appeared pleased with what they were seeing.

Elizabeth Allen, owner of e. Allen, a women’s apparel and accessories store in Nashville, Tenn., planned to do “a ton of buying,” at Coterie. She was shopping for denim, sweaters, basics and “some fun tops.” Her store caters to women  from their 20s to their 60s. Among the brands she was buying was French Connection, where she bought snake prints with good color options, “some wonderful jackets,” and crocodile prints. She also bought Monrow basics, knits and Ts. Megan Warren, the store manager and buyer, added, “I’m looking forward to buying fall shoes. I love the tall, slouchy boots which are great with skirts and dresses,” she said.

Sheree Morrison, owner of Mod, a women’s store in Cornwall, N.Y., said, “I’m actually looking more for spring. I like to shop more for immediates and keep it current.” She said she was buying the Australian brands Little Lies and Six Crisp Days, which she saw in Las Vegas but were also showing at Coterie. “I like statement pieces and anything that stands out,” she said. She also liked Project Social T.

Sarah Rhim, coowner of MG Women, a 60-year-old store based  in St. Louis, said she was seeking new lines and denim brands. In denim, she said, the rises are all over the place. People are bringing some color back into denim, and there’s a return of rigid denim. The store carries AG, Joe’s Jeans, Mother, and Closed. She was also seeing a lot of volume in sleeves, as well as ruffles, florals and prints. “There are tons of floral vintage prints and lots of shine,” she said.

Cathy Boskoff, owner of Shop Cathy B, a women’s specialty store in Woodbury, Conn., said she was shopping Coterie for unusual designs that are classic with a twist at good price points. “Shoppers are price conscious and you can get a lot of things that look expensive but are not,” she said. She noted that Minnie Rose is one of the store’s favorites, as well as Wilt, Bella Dahl and Misa Los Angeles. She also found a new bag line from Italy called German Fuentes. “They sell for $29 to $45, and look like a million bucks,” she said.

Janet Miller, owner of Irma Marie, a women’s specialty store in Chattanooga, Tenn., said she was seeking fall clothing that was wash and wear. “That’s what our customer is looking for. The trend is really casual and comfortable,” she said. It’s not activewear, but more separates. She ordered joggers from Johnny Was.

She was also looking to buy denim from Good American. “We’re going to try them. We carry DL 1961, and they do well,” she said. She noted that her customer’s sweet spot is 40 years old.