While traffic got off to a slow start, retailers were busy writing orders. 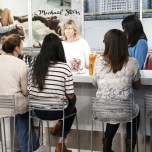 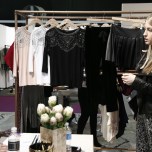 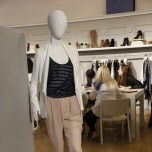 The three-day show was held at Piers 92 and 94 in New York featuring 400 exhibitors. While traffic got off to a slow start, retailers were busy writing orders. Booths such as Clover Canyon, Parker, Nanette Lepore, Tracy Reese, Vince, Free People, Ella Moss, Splendid, Joie, Comfy USA, Fillmore, Minnie Rose and Bailey 44 were among those crowded with retailers.

According to Courtney Quinn, trend analyst at The Doneger Group who was shopping Intermezzo, one of the biggest trends on display was Baroque bohemian, including crop tops, fuller skirts in midcalf length and a fancy tapestry feeling with jacquards and metallic yarns. Novelty sweaters, turtlenecks and funnel necks — as well as interesting plays on texture — were also prevalent. Quinn said she expects winter white to be a big trend for holiday, too. “There was so much cream, ivory and white. It’s a great giftable idea,” she said. She also noted that the athletic trend is continuing, in track bottoms and sweatshirt silhouettes. “It’s gym to street and street to gym,” she said.

Lori Friedman, owner of Great Stuff, which has five stores in Rye, Chappaqua and Larchmont, N.Y., and Greenwich and Westport, Conn., said she was buying cropped silk pants from Ramy Brook, “which sell well for me,” and the Marcy dress, which is a minidress that can also be worn as a tunic, as well as “going out” tops.

Friedman saw lots of fur collars, puffer jackets and sweaters. She noted that she bought scarves from one vendor at the show on Monday that she expected to have delivered immediately to sell for Mother’s Day. She also bought metallic T-shirts at Majestic. Friedman said she does well with the bags, T-shirts, sweatshirts and jackets at John Eshaya.

Overall, she said, business is picking up. “Everyone has had a hard winter and the weather hasn’t been our friend. There’s a pent-up demand for buying, which has been fabulous,” said Friedman.

Geralynn Madonna was shopping Intermezzo with her niece Corinne for Madonna & Co., a women’s specialty store in Manhattan. Madonna said she was seeking immediates and fall-holiday merchandise. She liked the embellished sweatshirts at Liberty Garden as well as their dresses, pointing particularly to a black sheer high-low dress with lace at the bottom ($88 wholesale). Other trends she saw at the show were full circle skirts in many different fabrics, lace, leather cutouts and the new midi length. Madonna said she was having a good spring season. Her store carries women’s contemporary sportswear that she called “edgy, feminine but sophisticated.”

Randi Siegal, owner of Rapunzel’s Closet, a women’s specialty store, and Lil’ Rapunzel, a children’s wear shop, in Palm Beach, Fla., said she was buying holiday merchandise at Intermezzo. From Minnie Rose, she picked up the cashmere and cotton shawls, sweaters and travel neck pillows for holiday delivery. “They’re a great gift item. We’ve done well with them before,” she said. Another line she bought was Sundry, which had cropped sweatpants, soft oversize Ts and pullover sweatshirts with sayings such as “Indie,” “Muse” and “Local.”

Siegal also bought Pam & Gela, the new line from Pamela Skaist-Levy and Gela Nash-Taylor, the original Juicy Couture designers. She purchased camo printed cropped sweats with zipper detailing, their signature high-low sweatshirts with a zipper on the back and fun shirts. “We did so well with Juicy back when Pam and Gela designed and so we know this line will do great,” said Siegal. From J Brand, she purchased gold colored denim and its new stocking denim. “It feels like a stocking inside, nice, smooth and fitted. It looks like a jean on the outside,” she said.

From Joie, she purchased sportswear with a lot of French motifs, such as a silk tank with a pattern out of mini Eiffel Towers and another with a pattern of perfume bottles. A lot of the sweaters had shine and Lurex, she said. Overall, she said, “The colors were very gray, black, some plum and army green. Not the sunniest of palettes, but it’s not spring deliveries. We were looking for more embellished going-out tops, but ended up buying a lot of comfy sweats, hoodies, fun Ts and lots of cropped and tapered pants,” said Siegal.

Eileen Sorota, buyer-manager of Peter Elliot in Manhattan, also bought T-shirts from Majestic. “We’re cruising the show for fill-ins and immediates,” said Sorota. She said she bought “very artistic” pieces of jewelry that look like Infinity scarves from Jianhui London at Accessorie Circuit. She said Peter Elliot plans to open a 1,000-square-foot women’s store this fall at 72nd Street and Lexington Avenue, which will carry classic to contemporary sportswear.

Carl Meyers, owner of the women’s specialty store bearing his name in Lexington, Ky., said he was buying sportswear mostly for fourth quarter. He was purchasing cashmeres from Cortland Park, with “very feminine details” such as pearls and pretty buttons. He also bought Byron Lars’ collection, which he called younger and more updated than other merchandise he carries. He bought dresses, some coats, a beautiful fitted ballgown (a fitted bodice and skirt) and a jeweled jacket. Overall, he was seeing a lot of dressy pants and jackets at the show. He said that the store, which has been in business since 1920, began as an army goods store, then morphed into custom-riding apparel and then designer clothes, where it sells European imports, sweaters, jackets, dresses, accessories and outerwear.

Betty Dayan and Monique Gootkin, co-owners of All Dressed Up in Rye Brook, N.Y., which specializes in special occasion dresses, were shopping for dresses at Intermezzo. Among the trends they were seeing were two-piece knits, lace and fitted dresses. “Parker looks great,” said Dayan. “We’re also starting to sell a lot of jumpsuits for evening,” added Gootkin.

Vendors surveyed said they were happy with the pace of business at the show.

• Bailey 44 was having success with its embellished cashmere blended sweaters, as well as its ponté jeweled neck dresses and tops, according to cofounder Ruthy Emsallem-Grode. The color for holiday is red, she said. She also noted that cutouts with sheer detailed insets have been well received. She is also offering matte jersey as an elevated jersey. Other highlights were a touch of tulle in tops and dresses, and cashmere and silk charmeuse paired together.

• Cluny, a division of August Silk, has undergone several changes and has a new creative team in place led by Nina Churchill. Its holiday collection, aimed at the contemporary market, features luxury basics, sweater dresses and knits. The company, which offers a lot of prints, plans to begin an artist collaboration in spring 2015, featuring different artists. Cluny’s collection wholesales from $59 to $250, with the bulk wholesaling between $75 and $150.

• Avenue Montaigne has added several novelty fabrics to its pants, skirts and dress offering for fall, including such men’s wear fabrics as pinstripe, glen plaid, houndstooth and flannel, according to Daniele Chemla, owner of the firm.

• Majestic said it was doing well with its viscose elastane basics. “Anything and everything in metallic is selling,” said Julie Wiener, brand manager. She said the company was offering metallic linens, metallic silks and metallic viscose elastane.

• Minnie Rose was having success with its sherpa-lined down puffer coat, wholesaling for $260. “We’re known for our blanket wraps and shawls, and we’re doing a security blankie with a snap,” said founder Lisa Shaller-Goldberg. Minnie Rose is also offering hats, tote bags and bling on sweaters. Shaller-Goldberg said the company is looking for a 20 percent increase for holiday. “The overall theme for the season is taking things that are casual and dressing them up,” said Clarice Lappe, designer of Minnie Rose.

• Liberty Garden, which just started shipping its first line, is offering sportswear using mixed media such as jacquards with suede and “graffiti tribal” in a sophisticated way. The Los Angeles-based company sells such stores as Urban Outfitters, Free People and Anthropologie, according to Daniel Bohbot, chief executive officer of Hale Bob, of which Liberty Garden is a division. For every unit sold, the company will deliver one malaria treatment for someone in need.