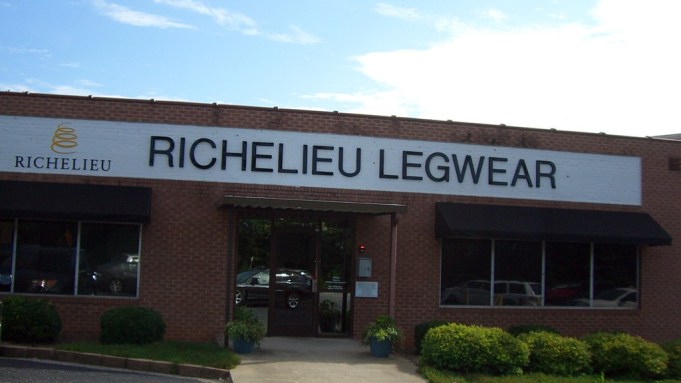 HILDEBRAN, N.C. — In this quiet, scenic little town in the foothills of the Blue Ridge Mountains, a Canadian legwear manufacturer is renovating an old hosiery factory into a state-of-the-art facility that encompasses and symbolizes the resurgence of the Made in America movement.

The Richelieu Group, based in Montreal, acquired selected assets of International Legwear Group in 2011 and hired 45 members of the firm’s workforce. Richelieu has set up its U.S.-based operations in Hildebran and employs more than 60 people, many of whom had worked for ILG for years and thought their jobs were disappearing.

Michael Penner, chief executive officer of Richelieu, said the investment came at the right time and is a case of a good business decision also serving the workers and the community.

“It makes you feel that you can do well by doing good,” Penner said in an interview in his office here. “That’s career satisfaction. The devil will be in the execution.”

Penner explained that Richelieu, founded in Sorel, Quebec, in 1934, had the license from ILG for the Peds brand in Canada and was looking to renew it. After having difficulty getting in touch with someone from the company, he finally discovered that ILG was in liquidation, selling off assets and laying off all its employees.

“So I figured it was worthwhile to come down here…and I met with the liquidators, met with the bank, met with the employees…to try to figure out how to resurrect the business instead of leaving the brand, and this business and all these great people to go by the wayside. We were able to put it together with Band-Aids and Popsicle sticks, and many different ways.”

With little time to work out a more structured plan, Penner said it came down to him “rolling the dice” and using a combination of Richelieu’s and his own finances to take over the business and “be confident that we would be able to turn it around and make it a successful business venture.”

Penner has worked for Richelieu for 10 years and bought the company seven years ago. Before that, he was a lawyer in New York.

“After the takeover of the business, we started to stabilize things. Year one — integrate the Canadian and U.S. operations,” said Penner, following a tour of the 200,000-square-foot facility, much of it undergoing a complete renovation. “Then I had an epiphany at one point, looking around at the people we had. We had so many great manufacturing people still with the company, but doing other jobs. So I started bandying about the idea of returning to our DNA — how can we get back to actually making product again.”

Both Richelieu and ILG had turned to offshore production, but some companies started talking about and doing more U.S. manufacturing. At the same time, Richelieu had been supplying Wal-Mart, so Penner decided to talk to the retailer about the concept of reviving the Hildebran facility.

“I called Duncan Mac Naughton [executive vice president, chief merchandising and marketing officer, Wal-Mart U.S.] and said, ‘We’re about to take over this business and I need to know what we need to do to save this program, in order to save this place, and be able to live to fight another day,” said Penner, wearing a pink blazer with white pants and shirt and navy tie on a hot summer day last month.

“These people don’t deserve to be thrown out on the street after all the hard work they put in over decades,” recalling his conversation with Mac Naughton. “I’ll never forget, he said, ‘Don’t ask me what you need to do, you tell me what we need to do to keep you open.’ That was all I needed and the next day, I signed all the documents with all the banks because I knew that they would back us. I was able to build back the supply chain, build back all the accounts, and we not only built back the business in a few months, we’ve quadrupled it in the last two years. We’ve relaunched Peds, Medi-Peds and Growing Socks. That was the entrepreneurial moment that will be on my tombstone.”

Wal-Mart Stores Inc. is in the midst of a 10-year, $50 billion investment in Made in the USA products that the company has said will amount to $250 billion cumulatively over the next decade. The retail giant signed a multiyear commitment with Richelieu and will provide support throughout the planning process.

Penner said it has been a classic case of the reward making the risk worthwhile.

“I tried to evaluate the risk, tried to minimize the risk, be very analytical and thorough, and scientific about it, but it is still a risk,” he said. “But the alternative is that if you’re not moving forward, you’re going to fall. It’s the principal of being stronger and more viable in the marketplace. The more independent we become, the more secure everybody is. In hindsight, it was the right decision.”

Key to the decision was the timing of the revival of Made in America, brought on by rising labor and operational costs in Asia, the desire of stores and brands for tighter inventory control and fast-turn capabilities in the wake of the Great Recession, and a movement to create jobs by industry and government.

The Obama administration launched its SelectUSA program in 2011 to encourage foreign direct investment in the U.S. In a report issued in conjunction with the latest SelectUSA summit in May, the White House said it has facilitated $18 billion in new FDI in the country.

Penner, who participated in the summit, said, “When I was at the White House for the SelectUSA summit, I was able to have a conversation with President Obama. I told him that five years ago, when I was at a factory near the DMZ in South Korea buying socks, if someone had said that I would be making socks in the U.S. and shipping them to South Korea, I would have asked them what they were smoking.”

In June, Richelieu received an award from the North Carolina Job Development Investment Grant program based on proof of job creation and other performance requirements. Richelieu is eligible to receive up to 12 annual grants equal to 75 percent of the state personal income tax withholding from the eligible new jobs created. Over the 12 years, the JDIG could yield aggregate benefits to Richelieu of $2.9 million. Of the grant, Penner said, “It helps, but the business has to stand on its own merits.”

There was also a synergy between the ILG business and Richelieu that has worked in its favor.

“Richelieu was very strong in the babies and kids section of socks and the previous companies were very strong in the ladies and men’s and wellness categories,” Penner noted. “Every chance we’ve had to launch or relaunch a Peds or Medi-Peds program with a major retailer, the demand has exceeded expectations two- and threefold, to my astonishment. I never realized how strong the brand was. We always did really well with it in Canada because we were bringing a better product at a better price, but I didn’t realize the consumer need.”

For Penner, the success of turning around the business is inexorably linked to the impact it had on the employees, their families and the community. Compensation for the new positions will vary by job function, but the average annual salary will be $37,912 plus benefits. The average annual wage in Burke County is $32,834, according to the state Commerce Department.

“There are people who work at the plant who grew up attending the company day-care facility or their children attended,” he said. “The community and solidarity are unbelievable and the competency is very strong.”

Talking to several people working at the Hildebran facility, there was a sense of gratitude, respect, relief and joy about what Richelieu is accomplishing.

Elena Azzarita, director of human resources and administration, said her son attended day care while she worked at the company, and noted how “when jobs went offshore, there was high unemployment in the area.” Azzarita wound up transitioning directly from ILG to Richelieu and said she took much comfort in helping to rehire people she worked with for so many years.

“When you work with people for so long, you become like family,” she said.

Then there’s Paul Houser, who lost his job but was rehired and recently made his first airplane trip — sent to Italy to be trained to operate new state-of-the-art automated knitting machines that are being installed at the plant. Mary Lowman, who has been there for 31 years and now works in the sample department, said she feels “very fortunate to have a job and a four-mile commute.”

Helen Davis, who works in quality assurance, said, “We thought this was all going away. To see the manufacturing coming back is wonderful.”

Penner said, “We’re hoping that when we get all the phases from Wal-Mart, we’ll probably be up to 450 to 500 employees. The way things were before and the way we can do it now, the numbers will never be the same. You can do 100,000 dozen with, let’s say, 10 employees, whereas 100,000 dozen used to take 20 employees. That’s because of automation in the machinery and packaging, and there are a couple of other secret things that we’ve put in that take steps out of the process.”

Penner said after analyzing the overall costs, Richelieu would have to pay more for the goods to be made in China than to make them in North Carolina.

“It’s not going to work for every product, but it works for the products that we sell,” he said, noting that a growth area is exporting to places such as Canada, the U.K., Mexico and South Korea. “We are looking for more. There a couple of opportunities we’re looking at. The key is financing the growth at an aggressive yet prudent pace.”