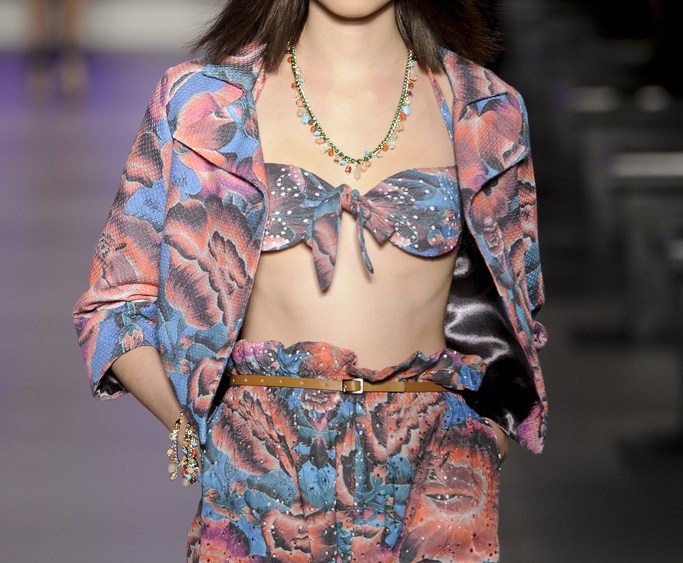 Currency fluctuations aside, Brazil’s economy drives the domestic market. “The economy is expected to grow by 3 percent in 2012, as it did in 2011. But it grew very little in the first half, with greater growth expected in the second half,” said economist Roberto Teixeira da Costa. “So I expect now-stable retail sales, including fashion sales, to rise slightly. But I don’t see a big retail boom on the horizon.”

“At this Rio-à-Porter, we sold the same amount as last June, even though our sales tend to increase by 20 percent from one year to the next,” said Alessa Midani, the owner of the Alessa brand. “I think that’s because the fashion market has been flat for over a year.”

Siaulin Lieu, commercial director of Maria Bonita Extra, with 15 boutiques and five franchises nationwide, added, “Our Rio-à-Porter sales did not increase over last year, but should increase by yearend because retail-sector growth is expected to be much higher in the second half compared to the first.”

She added that even though the real has devalued significantly against the dollar since last year, it’s still overvalued against the greenback. “And this means that middle- and upper-middle-class Brazilians continue to go to the U.S. to buy cheaper, dollar-priced fashion.  And this keeps our sales from rising.”

Fred d’Orey, owner of Totem, with 10 boutiques in Rio and São Paulo, also said sales at Rio-à-Porter were even with last year: “The average middle-class buyer continues to have a tight budget because his income hasn’t gone up much.”

Guilherme Kosmann, institutional manager of MCF Consultoria & Conhecimento, a retail and luxury consulting firm in São Paulo, said that a vast middle class with little disposable income should keep sales of mainstream fashion flat. But he said that a growing demand for qualified professionals has boosted the income of the upper-middle class, and greatly increased demand for better fashion labels.

“Right now, the market for mainstream fashion, like that shown at the Rio fairs, is nowhere near as strong as the market for luxury domestic and imported brands,” said Kosmann. “And in São Paulo, where fashion tends to be more upscale, the JK Iguatemi mall, a huge luxury fashion emporium, as well as other luxury malls there, will cater to this increased demand for high-end fashion.”

Rio-à-Porter featured 119 vendors, down from the 169 exhibitors at last year’s edition, because it relocated from a converted pier warehouse to a smaller space in a converted mansion.

Fashion Business featured 170 vendors compared to 310 exhibitors a year ago. It also shifted venues, from five spacious tents in the city’s marina to a smaller space inside a luxury mall and an adjacent hotel.  This year’s event did not feature runway shows.

Fashion Rio and Fashion Business will no longer hold their twice-yearly fairs in January and May-June. The changes are being made to be two to three months ahead of the current market timing, to help with production and timing of deliveries.

Both groups will hold events this October for winter 2013 collections.

A statement from Fashion Rio said the calendar change “brings the possibility of more effective commercial management and creating a greater interval between the launching of collection and its delivery to retailers.”

• TNG featured a turquoise abstract print on a cropped top.

Fashion Rio/Rio-à-Porter drew 90,000 trade visitors, most of them domestic, although 25 foreign buyers came from more than a dozen countries.

At Fashion Rio/Rio-à-Porter, bikinis were the big attraction for many foreign buyers.

He singled out bikinis in gold-foiled, ruched-back styles ($42 wholesale), which the brand made based on his specs, and a lemon-yellow, fringed-top number ($45).

“My young, fashion-forward clients look for something new, sexy and striking to wear to the beach and both of these brands fill that bill,” said O’Hara. “And given the quality and originality of these bikinis, the prices are right.”

Dina Ghorayeb, owner of Praias, a better swimwear boutique in Dubai, bought Salinas’ triangle and bandeau-top bikinis with an orange-heart print on a pink ground ($30), and Pimenta’s linen-cotton après-beach dress ($60) in yellow and orange.

“My clients are young women who like showy, vibrant beachwear,” said Ghorayeb. “Salinas offers such a look.”

Veronique Claessen, the Belgian owner of summerinstyle.eu, an online shop that sells only Brazilian beachwear, bought Lenny and Salinas brands for summer 2013, mainly for her French, Belgian and Dutch clients who travel to southern Europe for the summer.

“Lenny and Salinas have more creative cuts and prints than are available in beachwear boutiques in Europe, mainly who source in China,” said Claessen. “Brazilian beachwear prices are higher than those for bikinis from China. But my clients are willing to pay for these far-more original, eye-catching pieces.”

“I’m betting that these brands, which I’m buying for the first time, will please my younger clients looking for an alternative to the subdued European beachwear my competitors carry,” Montaner said.

“As our showroom has mostly European brands, Sacada is just different enough to stand out from them, while still [complement] them,” said Bustos. “They will make our display a bit less subdued.”

“The Maria Bonita Extra pieces are fun and flirty and reasonably priced, whereas the Alessa tops and dresses are sophisticated luxury wear whose creativity and quality warrant their higher cost,” said Dillon Patton. “And we expect the high-end clients at the Hawaiian hotels we supply will find Alessa’s dresses the perfect motif for a tropical vacation.”

“I have upscale, conventional clients who prefer vibrant colors, rather than fashion-forward styles, to look unique,” said Leite. “And Totem and Alessa offer this unique look at various prices.”