Federer's first product range, in which he'll have input, will come out next summer.

Roger Federer, the 38-year-old Swiss tennis star, made the rounds Monday, with appearances on the “Today” show, CNBC’s “Squawk on the Street” and a quickly organized press conference at 1 Hotel Central Park that afternoon to discuss his investment in On, the number-one running shoe brand in Switzerland.

News broke over the weekend that Federer had become an investor in On, where he will be involved in product development, marketing, fan experiences and be a representative for the brand. On is known for its Cloud shoes, which feature an “On” light switch logo, a little Swiss flag and a multiglobular cushioned rubber sole.

The tennis star, who is ranked number three in men’s singles, had just landed in New York that morning having competed in a Latin American tour, playing in such countries as Argentina, Chile, Ecuador, Colombia and Mexico.

Asked about his role at the company and how he became familiar with On, Federer said living in Switzerland “there was no avoiding the company. I saw it everywhere on the streets, and more and more of my friends were wearing them, and my wife started to wear them, too. In the last few years, I started to wear Ons myself, for training and also for everyday use.”

Federer said since he didn’t have a shoe deal, he figured he could meet the partners in On, since their headquarters are in Zurich, and he spends a lot of time there. He said he had an informal dinner with the partners.

“They were good people. They were fun, young, happy. It made me start to chat about the potential partnership or something. And they asked me all sorts of questions, and asked me for my input, ideas, vision, even before we were working together. One thing led to another,” said Federer. He said he loves working with a Swiss company, especially one that’s up-and-coming and cool.

On was founded in 2010 by former professional triathlete Olivier Bernhard, who approached his friends David Allemann and Caspar Coppetti about reengineering a running shoe to create a different sort of running sensation. The concept Bernhard was seeking was a cushioned landing and explosive take-off, or what they describe as “running on clouds.” Today, the shoes are sold in 55 countries.

Coppetti, a cofounder, told WWD how it came together over the past two years. “We’re conservative and like to do things slowly. We noticed that Roger was wearing Ons, and we thought that was great and free advertising. Switzerland is a small place. We went out to dinner together and had a really good time.” He said whenever Federer was in Zurich he’d come by the lab, and they realized he “has an absolute obsession for sneakers.”

Federer is a collector and owns 250 pairs of shoes. “He had so many cool ideas, and we joked, ‘we should do something together’ and it was when his Nike contract ended,” he said. Since they were a small brand, On didn’t have the cash to endorse an athlete. But over time, the idea of a business partnership came up. “It’s just a beautiful alignment of interests,” said Coppetti.

According to Coppetti, Federer will work on the performance product, the design center and sports marketing. “He has people he can reach. Getting on the “Today” show was one text message. That’s how things move. He makes things happen. A lot of athlete friends have reached out to wear them,” said Coppetti.

He said Federer will work on women’s and men’s products, but the designs are pretty unisex. In the U.S., the popular Cloud model retails for $130. Overall, Coppetti said, the shoe is more popular with women, which is uncommon for a sneaker brand, which has to do with the sleek silhouette and Swiss design. “We do have a strong initiative with women, especially with running,” he said. He said Federer’s first product range in which he’s had input will come out next summer. “It takes 18 months to develop a shoe. We’ve been working together for a year,” he said. 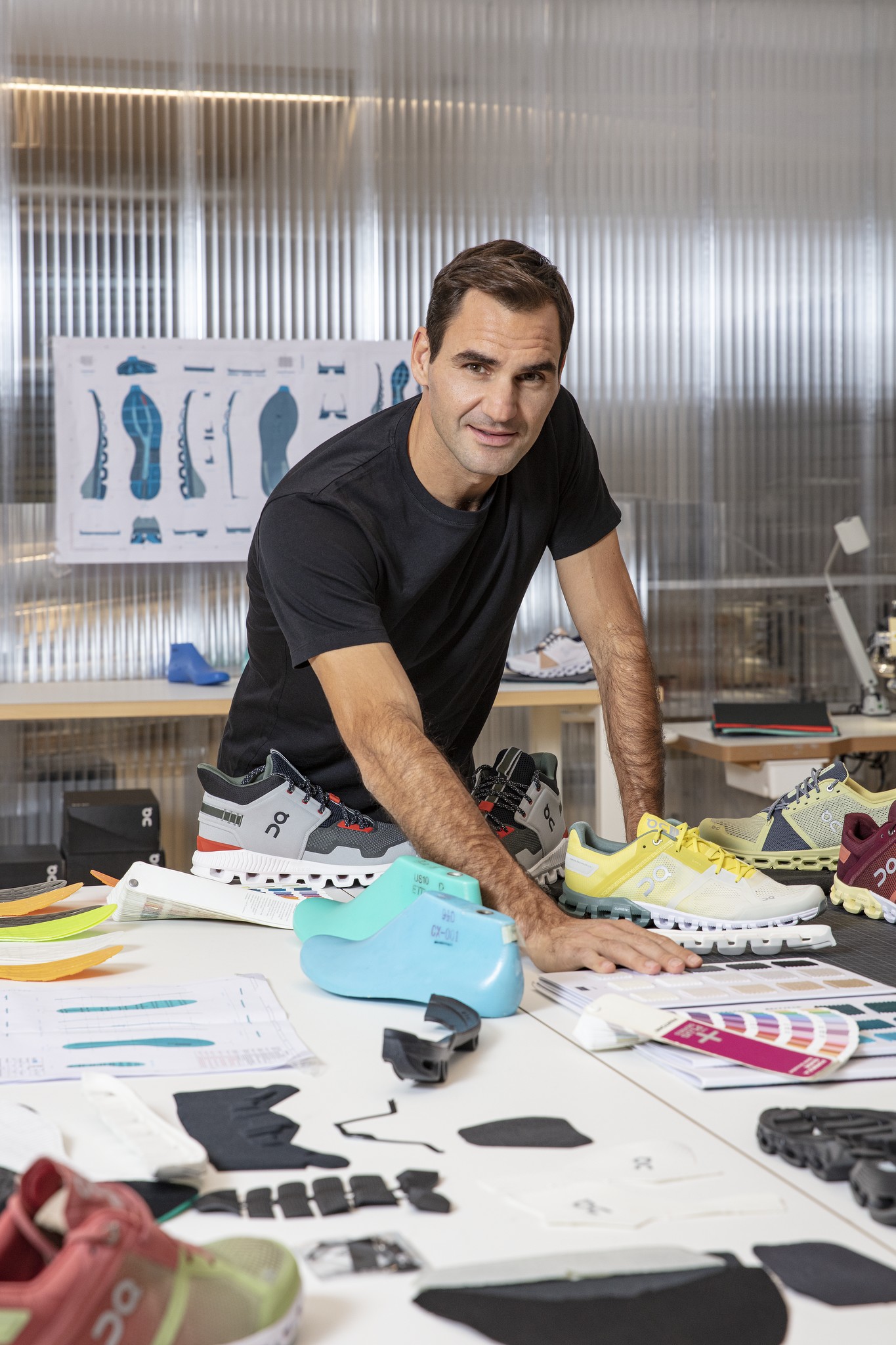 He said Federer won’t be working on apparel, just footwear.

“One space we want to explore is the history of tennis. It’s a very exciting space. Right now we don’t have a tennis shoe,” said Coppetti. Everything is designed in Switzerland and manufactured in Vietnam.

Allemann, a cofounder, told WWD, “He [Federer] has got a fantastic design sense. He’s very interested in fashion and super interested in innovation. On is the fastest-growing running brand worldwide, and is in ‘the top five running shoe’ in all the markets,” he said.

Allemann said during the press conference that On is looking to open its first New York store in the next few months, and Federer’s first designs would be available there. The brand is available in 30 doors in Manhattan alone, 2,500 doors in the U.S. and 7,000 globally.

Federer was asked as a big fan of fashion, what his style perspective would be. He said he hopes to collaborate and inspire the team, and they can pick his brain. “I’m pretty flexible,” said Federer. “I have a lot of feelings about what I see could fit the brand. Maybe tennis, heritage and history is a good one, but sometimes we haven’t used it….I’m really open and about to take the journey,” he said.

Looking to 2020, Federer said he plans to play in the Olympics, the major tournaments and the Laver Cup. But for now, “I’m looking forward to a vacation. It’s been an incredible last few weeks for me,” said Federer. He said he hopes to play in 2021, as long as his family, and his wife are happy and healthy, and he’s doing well and has good results. “If I have the chance to play and everything’s working, sure, why not?” he said. He noted that his business partners want him “to be fully focused on tennis,” and there’s no rush for him to stop playing. “This is why it’s extremely exciting and quite unusual,” he said.

Following the deal’s announcement over the weekend, all the employees in the On offices from Brazil and Australia to Japan and  Portland, Ore. showed up Monday morning wearing white — an obvious nod to Federer’s tennis career.

On to Enter Sneaker Market With Cloud Hi Edge

On Running Makes a Mark in U.S. Lifestyle Market