A global array of buyers found styles mixing cultures and traditions at the four-day fair. 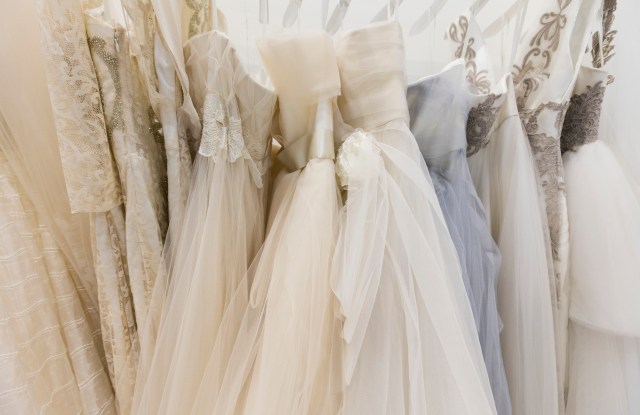 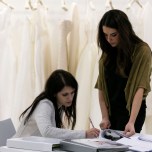 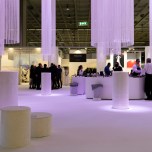 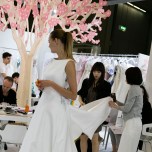 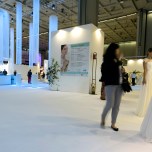 Marriage rates in the West may be continuing their inexorable decline, but business bustled at the four-day wedding and ceremony wear trade fair Si Sposaitalia Collezioni that ended last week at Fieramilanocity in Milan.

Collections presented swelled 10 percent over last year, while the ranks of buyers rose 6 percent to 7,766. A third of buyers and 41 percent of the exhibitors were foreign, marking an increase over 2015 and cultivating the fair’s standing as an international hub.

Fair organizers credited the vigorous business to the rise of western traditions in non-Christian celebrations across emerging markets, and to management’s new strategic savvy as matchmakers for exhibitors and buyers. Simona Greco, the new head of the Sposaitalia fair for Milano Fiera, took a firm line that supply must marry demand.

“It is not as though there is a single kind of buyer. We also have buyers from all price ranges, just as we have excellent exhibitors that are not just in the top price point,” said Greco, explaining that the types of merchandise exhibited should be proportionate to buyers’ needs. If most buyers seek commercial products, the fair should not be overloaded to creative couture.

Greco oversees art, fashion, hospitality and travel for Milano Fiera. She applied market research previously deployed in the hospitality sector, and came up with criteria to aggressively scout new buyers. The effort yielded 80 guests hosted from around the globe — a fourfold increase over last year.

Next year, Greco aims to play matchmaker, setting up meetings for buyers. For example, Cindy Mostert Brown, a South African trade consultant with Export Pavilion Promotions in Pretoria, anticipates receiving help meeting exhibitors certified as Made in the European Union, a status that reduces export duties on goods.

“That will lower import taxes from 45 percent to 20 percent,” said Mostert Brown, who brought 11 buyers to the fair, ranging from high-end department store Zed Menswear to wholesale distributors and boutiques.

Many hosted buyers came from counterintuitive, non-western markets such as Azerbaijan, China, Japan, Iran, Turkey, Indonesia, Qatar and the United Arab Emirates. Greco explained that double ceremonies using western and non-western wedding traditions are mounting around the world, as are weddings that fuse elements. Greco reported the double ceremony is spreading particularly in Pakistan, India and the Middle East.

“Iran is on the rise. We do not know for how long, but they have a longing for western things, especially made in Italy and at the high end of the market,” Greco said.

The double ceremony is popular in South Africa, too.

“Sometimes they are not done in the same year,” she added, noting that the financial hardship of meeting the bride price often weighs heavily on timing and family matters.

Meanwhile, western and eastern hybrid ceremonies continue to spread in Japan and China, although barriers to growth remain for western brands. In Japan, wedding planners usually rent white bridal dresses, thus limiting turnover, while most Chinese customers can not yet afford western prices.

Ironically, Tunisians are converting to western brands and practices precisely for the value they offer, according to Tunisian buyer Tatar Fathi, who owns a store with his wife in Tunis called Arous Carthage that sells bridal and cocktail wear.

“The traditional dress costs too much and is too heavy to wear,” he said. Cosmopolitan working brides do not see why they should spend roughly 5,000 euros, or $5,570 at current exchange, for traditional Tunisian ceremonial dress, with its restrictive materials and elaborate embellishment, when they can get a beautiful white western wedding dress for roughly 1,000 euros, $1,114. “It’s too much.”

At Sposaitalia, Fathi said he and his wife found appealing dresses they could retail at 800 euros, or $890. He added that couples increasingly marry at city hall, and truncate the traditional weeklong celebration at home with friends and family to a single reception. “They find taking a honeymoon together is better,” he said.

Meanwhile, international VIPs are spreading the general allure of western weddings, and Italian nuptials in particular, by holding them in destinations like Venice, Lake Como or Puglia. Greco called recent celebrity marriages, like those of George Clooney and Amal Alamuddin as well as Indian heirs and Russian oligarchs, “broadcast Italian food and territory at home.”

“Dresses end up in the newspapers, so they become multipliers for the Italian brand,” she added.

Emphasizing the “Made in Italy” element is bridalwear-maker Graziana Valentini, whose gowns are sewn by tailors in the southern Italian district of Putignano, near Bari. They retail for 1,800 to 4,500 euros, or $2,005 to $5,015. Marketing manager Laura Roberto said the firm’s best-selling gown plays on transparency, delicate beading and adherent, sensual tailoring.

She said new market cues point in a different direction.

“An important feedback we have received is that customers are changing,” Roberto said. Social media and the spreading impulse to freeze life on Instagram or Facebook means “brides are no longer looking for class, style and elegance. Now they want to be over-the-top.”

“I like to combine something from the cultures of Norway and Iran, like snowflake patterns mixed with Iranian white roses that I remember seeing as a child, or elements from Iranian carpets in embroidery mixed with fantasy leaves,” Hafzi said.

Big bows were another trend, as seen in the Japanese-inspired collection by Italian designer Elisabetta Polignano. Stylized kimono bows cinched waists while pastel cherry blossom petals cascaded across dresses that retail for 2,500 to 3,000 euros, or $2,800 to $3,340. The collection defied monochrome white, offering colorful, nontraditional options like a blue chintz silk print and pink with silver embroidery. Polignano explained that because brides are older, more experienced, more formed than in the past, her dresses offered expressive character. “I love the alternative bride.”

Bridal pants set another trend for 2017, seen in slim or loose trousers by Valentini, Alessandra Rinaudo and Papilio. A penchant for androgyny also found expression at the ceremonial men’s wear specialist Cleofe Finati by Archetipo, which presented ultra slim silk trousers for men with “masculine vigor mixed with feminine fluidity,” as spokesman Paolo Iannettone put it.

“Our battle horse is the male dandy,” Iannettone said of a collection that alternately echoed 18th century footmen and 1970s British gentlemen, with intricately composed patterns woven and stamped into silk.

American buyer Kathy Hart-Bado had come for Italian bridal shoes, but was enthused by the entire fair. she and her sister own The Wedding Factor, a three-year-old bridal store in Philadelphia that’s expanding. She, too, was scouted and hosted, and praised the fair: “I think that it is beautiful, refined, organized and accessible.”