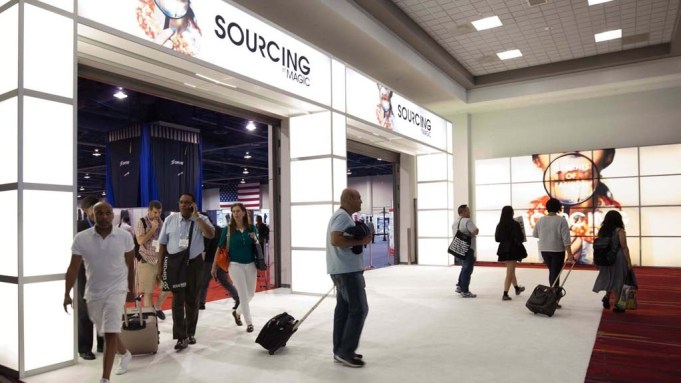 LAS VEGAS — In a sign of an improving economy, factories and customers looked beyond price to critical factors such as flexibility, quality, service and speed to market at Sourcing at MAGIC.

At the four-day trade fair held last month at the Las Vegas Convention Center, exhibitors appealed to attendees on a number of issues. C&E Apparel Inc., a New York company that imports yoga clothing and activewear made in Indonesia, China and Vietnam, drastically lowered its minimum for orders to 1,000 from 10,000. Parker Island Gator Farm from Lake Placid, Fla., was on a mission to promote alligator skin as a luxury for everyone. Baltic Sewing Co. ensured the use of European Union-made materials in the outerwear it makes while setting no minimum quantity.

“We try to accept every order,” said Benas Vaiciukas, managing director at Baltic Sewing, with clients that include U.K.-based Aquascutum and Sweden’s Filippa K.

Without a strict adherence to prices, trends like domestic production got a boost.

“We feel it’s trending back to making things here, even with the minimum wage rising,” said Mike Basteguian, president of Made-Well-LA, which highlighted its design, development and production services in the Made in USA section at the expo.

Despite the surge of interest in U.S. production, China continued to dominate the show with its sheer number of exhibitors specializing in various categories, whether it be denim, lingerie, textiles or sportswear. The Shenzhen International Brand Underwear Fair held runway shows organized with the China Chamber of Commerce for Import and Export of Textiles. To drum up more business, several Chinese companies offered incentives, such as a gift at a café after visits to at least two booths in the Premier China zone.

Designers like Kirat Anand, founder of women’s sportswear and swim label KAS New York, took advantage of the English-speaking staff at the Chinese booths to plan a tour of textile mills and manufacturers in China that will complement the factories he currently uses in India.

Other nations consolidated their vendors to showcase the best. Taiwan, Indonesia, Bangladesh and South America’s Andean region were some of the sponsors of country-­specific quarters. Vietnam returned with a pavilion of its own after participating in the ASEAN section two years ago with other Southeast Asian countries such as Thailand.

For the first time, in lieu of a country of focus, Sourcing highlighted a single category — denim. Chinese mill Freedom Denim made its Las Vegas debut. Brito, a Mexican cut-and-sew factory that also weaves cotton and bamboo fabric for clients such as Lucky Brand, was another newcomer that hoped to attract denim designers looking to expand into sportswear. Dipoint, a denim manufacturer that has been in business for 26 years in Mexico, tried to capitalize on its eco-friendly processes such as water-saving dyeing and ozone treatments.

“Our response time is much faster than [China’s],” said Christian Brito, Dipoint’s production and sales manager for exports.

Portugal’s Pizarro SA, came to the U.S. for the first time to promote its EcoWash that can save up to 70 liters of water per garment by using a combination of dry ice, ozone and laser technology.

“We feel a need to show people what we can do,” said Vasco Pizarro, director of marketing at the family-owned company established 31 years ago.

The concentration of booths in the denim section helped potential customers like Alyssa Whaley, a retailer from Dallas who aims to introduce a private-label line of jeans, skirts and dresses by the beginning of next year for her store Champagne Thursdays. “I really need flexibility,” she said, “someone who is willing to work with me as I start out.”

Dongguan Gangtian Textile & Garment Co., a Chinese company that handles cutting, sewing and packaging of denim, decided to take part in the new denim area to pick up its first U.S. customer. In business for 11 years, the company has been able to grow by offering not only credit to long-term customers but also fashion at a sharp price, such as distressed acid-washed boyfriend jeans that cost $7 apiece. Still, it has had to contend with a 10 percent increase in labor costs every year.