LONDON — The rapid spread of a new kind of coronavirus in China is causing global fear, and it could not have happened at a worse time: Chinese New Year, also known as Lunar New Year and Spring Festival, starts on Saturday and involves airline travel, family visits and billions of trips, which could trigger an acceleration of the disease across the country.

The spread of the virus, which can be transmitted between humans by as little as a sneeze or cough, has already dampened the usual celebratory mood this time of year.

Shou Deng, a resident in Wuhan where the virus was thought to have originated in a food market, said her family has canceled the Chinese New Year’s eve dinner on Jan. 24, and she will not go out until the New Year holiday ends. Many of her friends also have canceled travel plans and decided to stay in Wuhan.

She said fewer people are on the street in the central Chinese city, although major shopping areas such as Huayuandao, Hanjiang Road and Wuhan Plaza are still packed with shoppers.

As of Jan. 22 there were 543 confirmed cases of the virus, according to China’s National Health Commission. In three weeks, the virus has spread from Wuhan to almost every Chinese province, and beyond. The U.S., Thailand, South Korea and Japan have all reported cases. As of Wednesday, some 17 people had died, all in China.

Florentia Village Outlet Mall in Wuhan, which works closely with McArthurGlen Group and carries Prada, Bulgari, Gucci, Givenchy, Balenciaga and other luxury brands, has seen a 50 percent decline in traffic, according to center director Oliver Wang.

“We had a very good start at the beginning of January and kept breaking the daily sales records. The situation became very different from last weekend. I think it might need a few months to recover,” he added. Usually, the Chinese New Year holiday is a key period for brands, as many consumers go on a shopping spree.

In response to the outbreak, the outlet mall operator has issued a formal notice to staff in its six locations and has distributed free masks on-site both to staff and customers. It has equipped concierge and VIP rooms with sanitizers.

Xianwang Zhou, the mayor of Wuhan, took to national television on Tuesday urging the city’s 11 million citizens not to travel anywhere, and for outsiders to stay away. That won’t be easy for anyone as Wuhan is the central transportation hub in China because of its location.

Pierre Tegner, an analyst at Oddo BHF, said limiting travel and outings during the New Year would have an impact “on the consumption of cosmetic products, but also drinks and snacks. Alcoholic beverages could, therefore, be impacted.”

In its report, published Wednesday, Bernstein pointed out that market attention has shifted from the protests in Hong Kong to the coronavirus. The bank flagged epidemics as one of the major risks to the luxury sector in 2020 because the outbreaks disrupt travel. 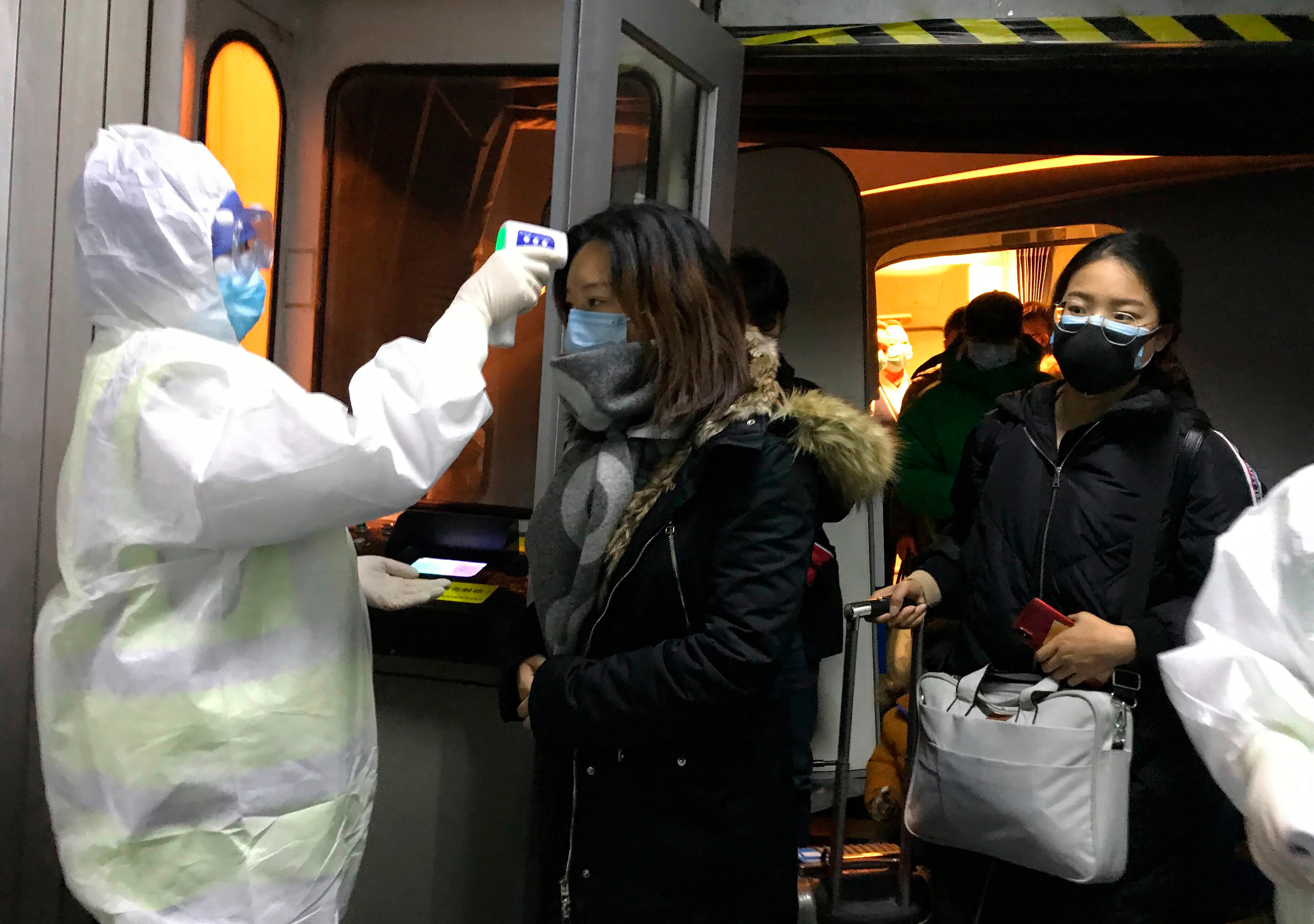 Health officials in hazmat suits check body temperatures of passengers arriving from the city of Wuhan, at the airport in Beijing.  Emily Wang/AP/Shutterstock

According to Bernstein, during the 40-day period before and after New Year, some three billion trips will have been made across the country.

Chinese spending worldwide represents 35 percent of global luxury goods sales and accounted for 90 percent of luxury growth in 2019, according to Bain & Co. Asia-Pacific makes up 40 percent of total retail and wholesale revenue for Burberry, for example, and a similar percentage at many other luxury groups.

All indexes recovered the following day, with Beijing demonstrating a commitment to curb the virus. “People’s lives and health should be given top priority and the spread of the outbreak should be resolutely curbed,” said President Xi Jinping on Monday.

On Wednesday, some European luxury groups recovered some of their losses. Kering rose 1.09 percent to 593 euros, while Compagnie Financière Richemont shares rose 0.24 percent to 77 Swiss francs. Moncler was up 2.62 percent to 41.48 euros and Prada jumped 4.38 percent to 31 Hong Kong dollars.

Burberry was down nearly 5 percent to 21.49 pounds after releasing its third-quarter results, while LVMH Moët Hennessy Louis Vuitton decreased 0.35 percent to 423.45 euros.

Wuhan resident Deng said she remains optimistic. “I experienced SARS in 2003. The way the government handling it now is much better. The information is transparent and we all know how to protect ourselves. Ninety-five percent of the people on the street in Wuhan are wearing masks.”

During the SARS outbreak, the government was slow to respond and, at the beginning, tried to cover up the spread of the virus.

Neil Ferguson, a biologist at Imperial College London, has estimated the number of cases in Wuhan to be about 4,000 with an uncertainty range of 1,000 to 9,700. The virus is believed to originate from animals and can cause pneumonia, fever, coughing and difficulty breathing.

Nanshan Zhong, a Chinese pulmonologist who discovered the SARS coronavirus in 2003 said: “I am very confident the SARS outbreaks 17 years ago will not repeat. We successfully identified the new coronavirus within two weeks of the outbreak, and we have very good disease monitoring and quarantine systems.”