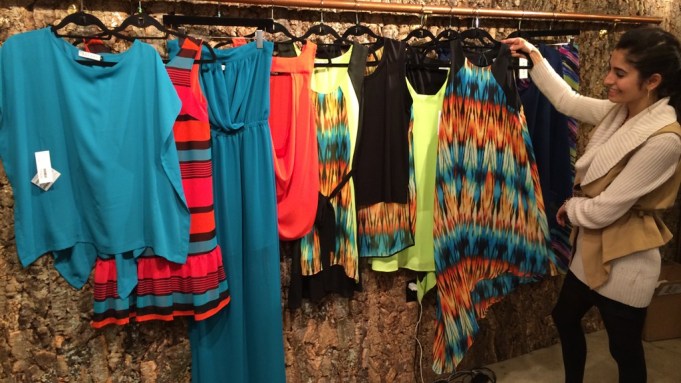 DALLAS — Jewelry and colorful dresses and tops for spring topped orders at the four-day show ended Sunday at the Dallas Market Center.

“I wrote more immediates than summer,” said Sonja Rountree, a partner in the Rountree, Allen & Associates showroom. “But I had one manufacturer, Shabi Chic, that had the first delivery of fall, and I did well with it.”

David Rhea, owner of the Indigo Agency contemporary showroom, said, “I’m writing 40 percent of spring volume in the first 60 days of the year.”

“We feel a pulse in the business again,” said Scott Blair, who runs four namesake contemporary showrooms. “Retailers are reporting good business, and so many stores are opening there’s this influx of excitement.”

Blair feels price is a major factor and now offers many lines wholesaling at $35 and under.

“I’m seeing them buying fewer lines but much deeper,” said Julie Hall, who specializes in jewelry and accessories at her namesake showroom. “One customer wanted only her two best clothing lines and two best accessories lines.”

Rita Manzelmann, buyer for Miss Jackson’s in Tulsa, Okla., was filling in casual lifestyle looks for spring and scouting pre-fall. She was also hunting for a spring wedding gown and mother-of-the-bride dresses for three customers, the sort of personal service that retains clients, she noted.

The specialty store is attracting younger generations via Mij, a department that made its debut last fall featuring styles under $195 by labels such as Naven, Lavand and Ivy & Blu. Higher-priced contemporary lines such as Yoana Baraschi are displayed in a separate area.

“My budget is up because of the Mij shop,” Manzelmann said. “Contemporary is my strongest category in the store. It’s doing fantastic.”

Finding timely styles for imperfect bodies was another business trend.

Eileen Fisher does a good job of providing stylish mix-and-match separates that shoppers can  layer into their wardrobe, he observed.

Grove Hill in San Antonio has resisted going “so contemporary,” a strategy that paid off with record-breaking business in 2013, according to Gretchen Richards, who founded the 28-year-old store. As she reviewed Finley shirts in new, wrinkle-resistant fabrics, Richards credited her recent success to the oil boom.

“The economy is really good in south Texas with oil and fracking amping up,” she said.

Angela Balli, owner of three All About Me stores in suburbs of New Orleans, was enthusiastic about the debut of Askari, a new contemporary collection by Shirin Askari. Everything in the colorful, flowing collection of dresses and tops retails under $150.

“The prints and silhouettes — it’s the first thing that’s excited me in a really long time,” Balli said.

“It needs to be a little bit different but not too different so they say ‘I couldn’t wear that,’ and a price point where they don’t feel gutted the next day,” Askari added.

Cindy Morris, chief operating officer of the Dallas Market Center, called the show “a strong start” to the year.

“Retailers showed up early, ready to buy, reinforcing our shift to a Wednesday through Saturday date pattern starting in March,” she said.