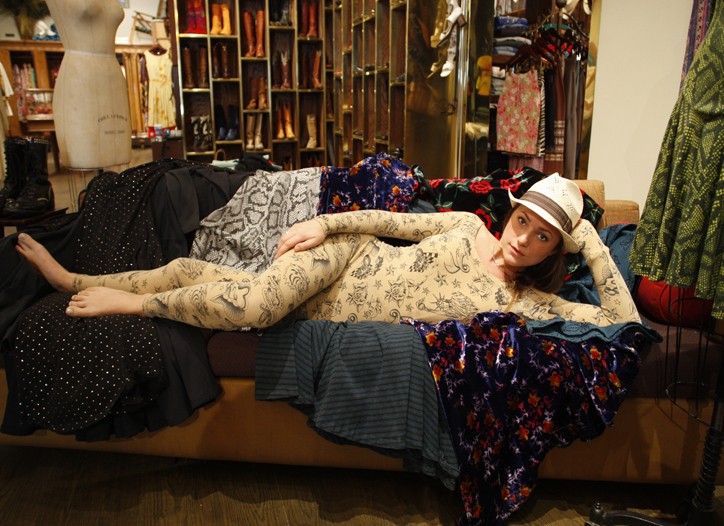 Her playful spirit translates into clothes that have a long shelf life, according to several vintage stores in New York that say her pieces are steady sellers.

Throughout her 30-year career, Johnson’s designs have oscillated along the style spectrum, ranging from whimsical to kitschy. Her vintage prices can range from $150 to $500, depending on the type of dress. Johnson’s current line bears similar price tags, suggesting that her label engenders similar demand in both the vintage and current markets.

“Betsey Johnson is definitely a name that has some currency with our customers,” said David Munk, a salesman at Chelsea Girl Couture, a vintage shop in Manhattan’s SoHo. Munk said the typical vintage Betsey shopper is a younger version of the original wearer, and that her designs from the Eighties are her bestsellers in the store. “Her pieces reflect the spirit of the Eighties, and it’s a way for customers to grab that feeling in one purchase,” Munk said.

However, Cesar Padilla, one of the owners of Cherry, a 15-year-old vintage store in the West Village, said the top-selling Betsey pieces in his store are her feminine and floral designs, and Seth Weisser, co-owner of What Comes Around Goes Around, a SoHo vintage retailer, believes that Betsey’s punk style is what his customers want.

Such varied responses suggest that Johnson has created a multitude of successful styles that not only have maintained their luster, but also appeal to a wide variety of customers.

Rachel Petersen, store manager of Buffalo Exchange, a fashion trading post in Brooklyn where customers can buy, sell or swap their clothes, noticed that all types of people purchase Johnson’s clothes. “Depending on the [item’s] era, it appeals to different classes of fashion, be it the hipster or the socialite,” Petersen said. Whether it’s bat mitzvah-bound adolescents or musicians like Amy Winehouse, Johnson’s designs, vintage or not, garner a wide customer base.

The very fact that she is still designing might also give Johnson an edge in the vintage market. “People tend to buy the names they know,” said Lexi Sacchi, a buyer at Lower East Side vintage store Frock, who fi nds that the average shopper gravitates toward familiar designers. “In that way, Betsey pieces have a certain cachet about them.”

Sacchi finds that the Betsey Johnson customer is either between 20 and 25 or is a bit older, but works in fashion so she “gets it.” Beyond the casual shopper, vintage collectors are beginning to look for and covet Johnson’s pieces, according to Weisser of What Comes Around Goes Around. Weisser said he believes that Johnson’s clothes are reaching a level of collectibility ahead of other designers of her time, such as Norma Kamali and Nanette Lepore.

“Betsey has more of a history and when it comes to vintage, the longer your history, the more relevant you are,” Weisser said.

Johnson’s success in the vintage market may also be attributed to the fact that she is no stranger to the scene. Farah Pidgeon, director of sales at Southpaw, a by-appointment-only vintage store in New York’s fashion district that has worked with the designer for many years, said Johnson is known to come into the store to find inspiration.

“Many pieces we see on her runway are influenced by what she borrowed from us,” Pidgeon said. “She’s Betsey, so she can just look at anything and make it her own.”

Johnson celebrated 30 years in business at her fall show in February with a retrospective of looks. In reaction to the positive response, Johnson is launching her own Betsey Johnson Vintage label. The label will revive her punk aesthetic from the brand’s inception. A preview of approximately 10 styles will begin to hit stores monthly, starting in late August, and a bigger collection will launch in 2009.

Weisser thinks this revival is a wise decision on Johnson’s part. “Fashion should always revisit successes and bring something back to new markets,” he said. “Lots of fashion companies are looking to their archival pieces, it’s a valid move.”

Ultimately, many believe the true vintage Betsey will only become more valuable with time. “I’ll take any vintage Betsey Johnson pieces I can find because they sell,” said Sacchi at Frock.