Despite some glitches, trade fairs have solid outing. 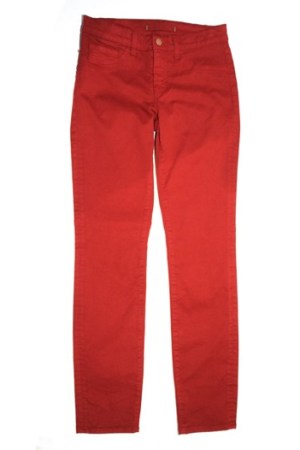 NEW YORK — There was a decidedly upbeat attitude from buyers and exhibitors at the latest round of trade shows that took place in Manhattan. Trends from furs and lace to jeans and colorful tops brought in orders, and even some low-traffic spots and a fire evacuation at one of the venues didn’t seem to deter business.

Intermezzo, which took place at Piers 92 and 94, got off to an early, strong start and appeared to be busy with retailers. Among the big trends were colored skinny jeans, sexy tops, body-hugging knits and capes, oversize square tops, and fur vests and accessories, mostly for fall. For holiday, there were lots of sequins and sparkle in everything from tops, such as the Hunter Dixon lime green blouse with shoulder embroidered detail, to cocktail dresses, such as allover sequined one by Parker. Another standout was Porcelain NY, which offered lingerie-inspired dresses, as well as lace long-sleeve dresses in green with gold accents.

Many retailers and exhibitors had cold-weather sales still on their minds.

Grace Guido, owner of Ambience, a specialty store based in Edgewater, N.J., said she carries such lines as Alice + Olivia, Elizabeth and James, J Brand and Riller & Fount. She was looking for pants for fall. “For spring-summer, there are flares to wear with wedges, but for fall, I’m going back to skinny,” she said. Guido bought some symmetrical full tops, as well as some form-fitting tops. She also purchased some printed styles in colors such as aubergine and burnt orange from Nally & Millie, and “some gorgeous colored jeans from J Brand.”

Lori Goldstein, owner of Great Stuff, with five stores throughout New York and Connecticut, said she liked the Claeson collection of updated activewear because “it’s not too pricy and is crisp looking.” Goldstein said she carries it in the store now, and will order it again. Citing new skirts from Avenue Montaigne, she said, “We’re running with it. There are pencil skirts that are sexy and they go with everything in our store.” She also said she planned to buy Tracy Reese’s Plenty line of dresses, as well as Bailey 44.

Gail Levy and Suzy Frankel, owners of Gotham in Milburn, N.J., were shopping for young contemporary looks. “We’re looking for colored denim, in skinny and flares,” said Levy.  She liked the denim at Vintage Revolution, and also planned to check out her usual resources such as J Brand and Free People. “But we’re always looking for up-and-coming designers,” she added.

Betty Dayan and Monique Gootkin, co-owners of All Dressed Up, a special occasion store in Rye Brook, N.Y., were seeking dresses and gowns for their largely teenage clientele, to wear to bat mitzvahs, Sweet 16s and proms. Gootkin said she was seeing the Kate Middleton influence already taking hold. She purchased some Shoshanna dresses with three-quarter-length lace sleeves. “We’re seeing a lot of lace, sequins, shimmer and fitted dresses,” added Dayan.

However, on the last day of the three-day event, a morning electrical fire in the ladies’ room at Pier 94 forced attendees to evacuate.

“An entire day was lost in business,” said Richards.  “What a disaster. There was…no alarm and…people were running through the aisles to get out. There was no opportunity to grab anything.”

She said people waited outside in the pouring rain and then were moved to Pier 92, which remained in operation, to wait it out.

“Our booths were unmanned. They did not let people back in until 3:30 p.m.,” and then everybody basically packed up, said Richards. “We got a $700 coat stolen. They told us to get security people to file a report.”

Tom Nastos, president of ENK International, said, “We are looking at all the issues and dealing with all the insurance companies. We put together a hotline for anyone who has any issues. We fully intend to address every exhibitor issue.”

Despite this problem, Nastos said, “The show went really well. The exhibitor mood was really good and the retail mood was very good.”

“It’s not that our average order has changed, we are just noticing that our customer is buying multiples at lower price points,” said Joanne Stoner, founder of online retailer Edressme.com.

She was pleased to see a lot of novelty items at the show, citing “lacy, embellished and items with exposed zippers,” as some of their bestsellers.

At Alternative Apparel, a representative for the brand said it had seen its best first day since the brand started showing at FAME more than four years ago. Immediate, discounted deliveries were booking, with smaller boutiques also going for novelty seasonal items such as chunky sweaters at higher price points, versus the brand’s signature basics.

Lovemarks, which manufactures trend-driven tops retailing from $38 to $52, felt a strong upswing compared with last season.

“Instead of being cautious and saying, ‘I’m covered,’ my buyers area is expanding and more are open to variety and color. They’re not scared of the excess inventory anymore,” said the brand’s East Coast sales representative Ilene Oren, who added that the biggest sellers at the show were bright print tops.

Los Angeles-based Free Bird was writing orders more on the immediate side, with discounted items selling well to accommodate the just-turning weather. Silky separates were the brand’s biggest hits and buyers were still looking at longer lengths and wild prints for fall.

If contemporary designers have their way, there could be enough stripes this fall and holiday for Waldo to truly get lost in the crowds.

From tops to dresses, Breton stripes were a standout look at the show. For retailers who didn’t intend to take a trip down the French Riviera, however, there were alternatives at this smaller edition of the trade exhibit at the Starrett-Lehigh Building. Among them were artisanal knits in all gauges, printed dresses, layered looks and details such as lace.

“I am looking for special items,” said Deborah James, owner of boutiques in Boca Raton and Fort Lauderdale, Fla., at the booth of German jewelry designer Gabriele Frantzen. “We have had a nice holiday season and now customers are back. They are looking for buy-now, wear-now pieces.”

Deborah Kent, owner of the store by the same name in Tampa, Fla., said, “Business has been very good. Customers always have a little discretionary money for fashion, but now they want impact for their money.”

Kay Lee, founder and buyer of Otte’s three stores in New York, said the poor weather on the East Coast early in the spring impacted sales, but she was hopeful that milder weather will more than make up for it.
“I am looking for accessories,” Lee said. “I have been seeing a lot of chunky knit scarves and hats, and great printed cashmere scarves.”

Lee stressed that price continued to be a driving force in consumers’ buying patterns. “We are being very careful [with pricing] but if something is unique, they buy it,” she added.

Among the top striped items were a black-and-white top by Minden Chan, and a red-and-white tank dress by Edith A. Miller made from cotton produced in North and South Carolina.

As in previous seasons, this edition of D&A featured a specific area devoted to the Green Market, with several lines using sustainable and recycled fabrics. Among them, Madrid firm Ecoalf, which showed at D&A for the first time, featuring outerwear and accessories made from recycled fishing net nylon. The line, represented by the Indigo Showroom, wholesales for $90 to $140 for jackets and $60 to $110 for bags, and among the bestsellers was a down-filled jacket lined with recycled cashmere.

Made By…, which is represented by the True Collaborative Fashion showroom, also made its D&A debut, with a novel fair trade concept that features artisanal alpaca items hand-knitted by Peruvian women. Each item comes with a tag featuring a picture of the woman who created the piece and information on her. On average, the pieces wholesale from $120 to $150.

Vendors at the Moda Manhattan trade show were feeling uplifted. Most were pleased with the attendance and said they were going home with orders and better sales than a year ago.

One busy booth was accessories brand The Echo Design Group Inc., where sales assistant Erica Broadwell, said, “This year was much better than last year. The buyers aren’t really price conscious. If it’s a great look, they’ll buy it.”

She said top sellers were items showcasing a “chunky” trend, while ruffles are still a popular look for fall. Echo’s touch gloves, which has special fabric at the tips of the thumb and index finger to allow the wearer to manipulate a touchscreen device, such as an iPad or iPhone, was a popular item. One glove, a microfiber shell with Thinsulate lining, wholesales for $19.

Steve Waldheter, account executive at Maggy London/London Times, said, “The traffic has been terrific. This year was better, about 50 percent to 60 percent more than last year. There’s a sense of urgency. People didn’t buy enough at the beginning of the season.”

Mickey Vella, owner for the 212 Showroom NYC, said attendees were placing orders for small fur items — capelets, vests and short jackets that wholesale for around $190, under the Diana Rosh brand.
“This is the best sales we’ve had in one-and-a-half years,” she said.

According to Vella, there were more high-end specialty retailers attending the show this year, those selling to the “contemporary crossover customer between ages 30 and 90 with disposable income.”

A sales representative at 925 Company, which sells 100 percent sterling silver jewelry, said business hadn’t been great, speculating that the rise in the price of silver has many targeting costume jewelry instead.

Over Regis Ales by Enttra, specializing in costume jewelry, customer service representative Michelle Viera said she was seeing many new customers at this year’s show. Chunky accessories were popular items, such as a bold glass beaded necklace with brass chains that wholesales at $8.50, as were bracelets comprising of enamel tubes strung together by a heavy-duty nylon cord with a bit of stretch selling for $6.50 that would retail for more than $20, she noted.

Hoping to entice buyers with collections that were high on newness, moderate on trend and low on price, vendors showcased wearable fall looks for the older female consumer.

Wholesaling for $59 to $400, Dress to Kill’s clothes include loose-fitting pants, tunics, textured, oversize tops, funky jackets or, as Mohr calls it “tactile things with personality.”

At Nouveau Collective, bold prints, bright colors and ruffles dominated, according to show director Joanne Feinstein, who is in the process of organizing a runway show for the exhibition in September, all in the hope of putting the “fun” back in shopping.

At both Nouveau Collective and Atelier, exhibitors complained that there wasn’t a steady stream of buyers, putting into question the vitality of the economic recovery.

“I don’t things are getting worse or better,” Feinstein said. “Department stores are buying immediates. People are still buying at the last minute.”

In order to remain flexible during the slow economy, vendors like General Apparel, a Riverside, Calif.-based manufacturer, offered buyers the option of customizing their garments by size and color. Clothing, including ruffled blouses and crinkled polyester dresses and jackets, wholesale for between $25 and $75.

Echo, an Atlanta-based brand offering only recycled garments, is hoping to ride the wave of sustainability in fashion. The five-year-old label sells one-of-a-kind clothing made from factory scraps, garments from landfills and clothes donated to Goodwill, according to sales representative Angela Dawson.

“The average American throws away 85 pounds of clothing a year,” she said. “A lot of this stuff was going to waste.”

Wholesaling for $31 to $75, Echo’s collection comprises T-shirts and flowy bottoms that incorporate “comfort” and “uniqueness” — two qualities customers of the misses’ category are looking to snap up, as the trend to dress casually continues to prevail, said Dawson.