Textures (jacquard, chunky denim and denim that's finer than cashmere), embellishments and connected denim were among highlights of the fair that returned to Paris. 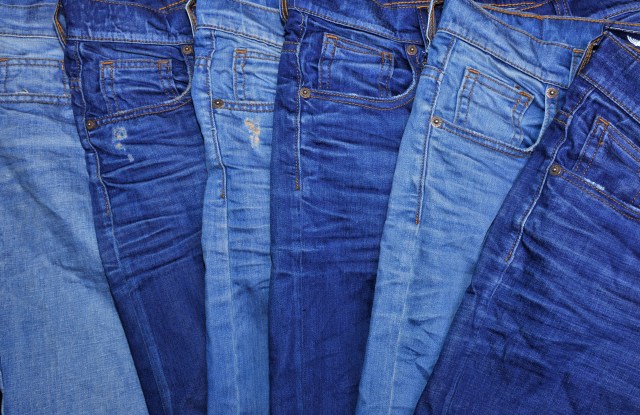 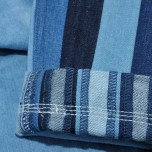 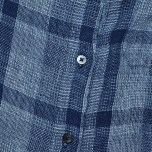 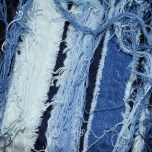 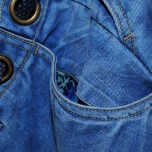 PARIS — A focus on fashion-lead fabrics attracted a host of contemporary chains and more international visitors to Denim Première Vision, despite a sharp drop in overall visitors.

Denim PV put the spotlight on treatments that mimic DIY customization — embroideries, embellishments, patches, tie-dye and drip effects — along with fancy textures such as jacquards and chunky stripes.

Istanbul-based Çalik Denim introduced a denim called Miyabi that it bills as soft and smooth as cashmere. Colors for the spring 2018 season hinged on teal green or sage, French blue and lots of white, either as a fashion shade or for dyeing.

The fair counted 80 exhibitors, on par with last November when the show was held at Barcelona’s Montjuïc exhibition center.

Created in 2007, the show was previously held at La Halle Freyssinet in Paris until it moved to Barcelona for its May 2014 edition.

Visitors totaled 2,300, down from 3,823 in November 2015, with international visitors standing for 78 percent of the total, up from 74 percent in November in Barcelona.

Show director Chantal Malingrey said the move to the French capital was meant to better answer the needs of exhibitors and brands — denim pure players and fashion brands.

“In Paris, you attract more fashion brands and they need to be accompanied more on denim because they’re not specialists,” she said.

Representatives of French contemporary brands including Claudie Pierlot, The Kooples and Agnès b. were among buyers who turned for to the show. The edition had been moved 15 days ahead of the scheduled dates, which may have dented attendance.

“The earlier, the better,” she said, praising the trends area, the lightweight fabrics at Blue Farm and Cappio, and the denim mimicking velvet at Velcorex. She cited the mill and denim manufacturer E-Jeans out of Japan among her discoveries.

As a result of the do-it-yourself and customization trend, embroideries and jacquard are having a moment. Textile mills are becoming more creative, nimble and innovative as they invest more in special machines to process denim, meaning less work needs to be done on finished garments. Manufacturers can just cut and sew and they don’t need to wash as much.

Steve Romero, denim consultant for Denim PV and previously men’s denim designer at Seven For All Mankind, said “uniqueness and texture” are the buzzwords for spring 2018. For example, the tie-dye effect brings something special, the feel of a one-of-a-kind piece.

“You might have the same fabric, but every piece is different without having to do too much work,” Romero said.

Similarly, drip denim offers a special effect. “Jackson Pollock is a great inspiration because of the artistic feel,” he said.

Trimmings are getting more playful, too, with car-racing inspired tire-shaped buttons, for instance. “The patches and the trims bring some pop to it, make it less serious,” noted Romero.

When it comes to textures, Romero also lauded dobbies and Japanese-inspired fabrics with heavier yarns that look more chunky, as well as more gauzy fabrics.

Pakistani weaver Kassim presented connected jeans. It integrated a technology implanted in a leather patch and allowing such features as sending out a tweet by moving. Kassim wants the technology to be a blank platform for designers.

“It depends on the features you want,” said a Kassim representative.

Tilmann Wröbel, creative director and founder and of Paris-based design studio specializing in denim, deemed the micro-chip movement analysis as shown by Kassim “interesting and surprising.”

She praised such weavers as Azgard-9 from Pakistan and Advance Denim from China. On the fair’s move to Paris, she said: “Paris is more interesting for us. We went shopping yesterday. We came in September, but this time we can see the Christmas and winter collections.”