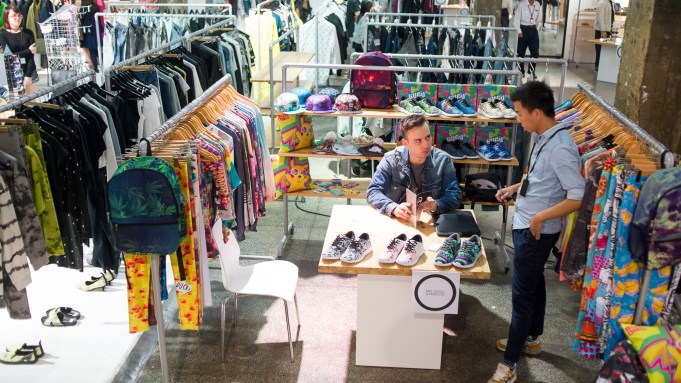 SHANGHAI — Fashion trade show The Hub moved to a new, sleek spot in Shanghai this season from Hong Kong, a sign that international brands are coming closer to embracing the mainland city as China’s fashion center.

The Hub, a biannual trade event, is a platform for international brands and designers to connect with franchise, distribution and licensing partners in China, including independent retailers.

The move was a signal that organizers believe the fashion focus in Asia has shifted from Hong Kong, the traditional finance and business center that enjoys favorable import and tax duties, to Shanghai, where new media and fashion innovation is converging.

“We always planned to move to Shanghai,” said show organizer Richard Hobbs, who launched The Hub with Peter Caplowe in 2013. “Last year, we were at Shanghai Fashion Week and agreed the time was beginning to feel right — the atmosphere, the venues, the type of people. It’s where the action is now, and it’s where the government have decided China’s fashion center will be. We are staying here for the foreseeable future.”

This season’s show downsized to 40 brands, half the number present at the last Hong Kong event in March. Nonetheless, the condensed selection, offset by bare walls and simple rails, pleased the majority of brands, which hailed from 17 countries, including the U.S., U.K., Indonesia, Malaysia, Australia and China.

“The Hub is not too big and characterless like other fashion events in China where we get lost,” said Misun Song from South Korea’s People of Tastes.

A number of notable trends emerged. Buyers commented on the unusually high turnout of British heritage brands, which accounted for almost a quarter of labels present. These included Fox Umbrellas that date back to 1868, and Boy London from 1975.

Attention this year was focused on Jack Moran founder and shoe designer Oliver Sweeney. In 2005, the British designer suffered a stroke, leaving him paralyzed on his right side and unable to walk. Four years later, tragedy struck again when he lost his eponymous business label, Oliver Sweeney, which had been running successfully for 20 years. It continues without the founder at the helm. Undeterred, Sweeney launched Jack Moran, which bowed in Asia at The Hub.

“This is a chance to show the world his skill once again and to create new design classics,” said a spokesman for Jack Moran.

Brands expressed a desire to forge contacts and connect with independent retailers across China, not just the big name stores.

“We have come here with an open mind,” said Charlotte Blackmore, marketing and sales director of luxury British tweed specialists Chrysalis. She added their business has not been adversely affected by the recession in Europe.

Attendees also spoke of the need to appeal to a new type of Chinese consumer, who is younger, independently minded and tuned into international trends.

“The new generation doesn’t want luxury, they want lifestyle trends,” said Kevin Tallon, the Swiss designer behind Capitale Nord, a Beijing-based men’s wear label. “People want to be associated with values that certain brands represent, whether it be an organic focus or denim crafting that’s getting so popular in Europe now.”