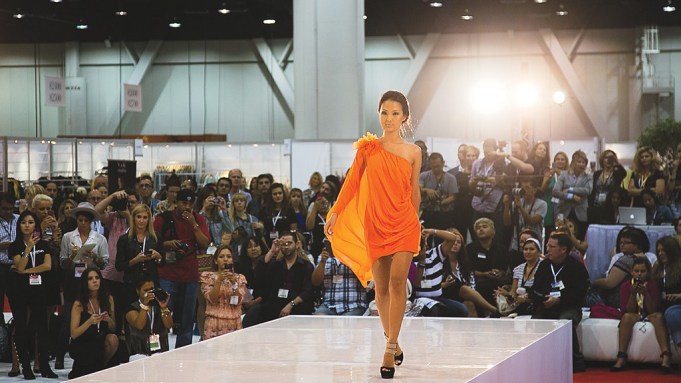 The top 12 things to know at the shows.

(1) RUNWAY HIGHLIGHTS
Sometimes viewing clothing on hangers in a booth is insufficient — and WWDMAGIC is well aware of that.

Organizers will stage fashion shows in the North Hall each day of the trade show. James Campbell, who produces contemporary fashion shows for Directives West, is spearheading the WWDMAGIC fashion shows. Every day he will focus on a trend, which could range from the season’s must-have pieces to key colors.

The shows will feature 60 to 100 looks from brands exhibiting in the North Hall, among them Andrew Marc, Eileen Fisher, Laundry by Shelli Segal, Johnny Was, Gorski Group and Jane Post.
— Rachel Brown

(2) BUYERS GET A HAL PASS
While all buyers hope that the items they order at the shows will translate into hits of the sort featured in fashion magazines, the whims of fashion and its customers are often hard to predict.

InStyle’s fashion director Hal Rubenstein hopes to take away some of the guesswork for buyers by presenting a seminar of his top picks across all categories of WWDMAGIC on Feb. 20 at 1 p.m. in the Buyer’s Suite in the North Hall. Rubenstein’s next stop will be Hollywood for Oscar Week festivities, where some new red-carpet trends will soon be born.
— Marcy Medina

(3) IN THE BLOGOSPHERE
Fifteen international bloggers are expected at the WWDMAGIC show this year, and the various MAGIC shows at Las Vegas Convention Center will feature blogger lounges throughout, including the launch of Social House on the Concourse, site of daily discovery sessions where bloggers will present their latest showroom finds, trends and social media panels. At a special Tokyo Pop panel, Misha Janette, Plumb designer and blogger at TokyoFashionDiaries.com, and Mai Ann Nguyen-Miyoshi, aka maisassygirl from “Just another Typical Night in Tokyo” (maisassygirl.blogspot.com), will speak about the influence of Japanese street style (Harajuku).

(4) CHANGES AT ENK
When Magic and Project owner Advanstar Global LLC acquired ENK International LLC last November, there was never any doubt that ENK Vegas was in for some changes.

Now those changes are being implemented. ENK Vegas, which runs from Feb. 19 to 21, is relocating from Wynn Las Vegas to the Mandalay Bay Convention Center, where it will reside near Project. ENK Vegas is taking over the high-end contemporary women’s portion of Project, while Project will focus on men’s and dual-gender brands. Advanstar believes the moves will create a more efficient trade show experience.
— R.B.

(5) STITCH IN TIME
Stitch is weaving its way into the Las Vegas apparel trade show lineup.

That’s the name for the upgraded Moda Las Vegas, which trade show operator Business Journals Inc. decided to rebrand because it has expanded from its initial focus on women’s special-occasion dressing to encompass sportswear, better contemporary and lifestyle brands as well. Moda Las Vegas has also received a makeover in its transformation into Stitch, with fresh taupe carpeting, revamped lighting and white metal booths meant to give it a luxury feel.

(6) HEART OF THE MATTER
Save a trip to Paris and say bonjour in Las Vegas yet again to Heart of Prêt, an area dedicated to French brands at WWDMAGIC. In its fourth edition, Heart of Prêt will showcase 35 brands — more than in any previous season.

Among the brands are Lauren Vidal, Save The Queen, Rizal and Matti Mamane.

Heart of Prêt is the result of a partnership that started in 2011 between WWDMAGIC and Prêt à Porter Paris, the European fashion trade show and event producer.

(7) UP-AND-COMERS EXPAND
In its sophomore year, WWDMAGIC’s Emerging Designer Showcase will expand to incorporate two divisions: Ready-To-Wear in the North Hall and Accessories in the Central Hall. The dozen apparel vendors are:

On the accessories side, costume jewelry exhibitors include:

Other vendors include handbag lines Mei Vintage, DApper Diction and Hipsters for Sisters; and hats from Bijou Van Ness.
— M.M.

(8) PROJECT’S BIG SHIFT
It’s a momentous year for Project as the denim and contemporary trade show, which hosts more than 2,000 brands, undergoes an extensive update and becomes the men’s centerpiece of MAGIC Market Week, as the entire lineup of Advanstar Global-owned trade shows is dubbed. MAGIC Mens/Wear has been rebranded Project Mens/Wear, joining two new showcases: The Tents at Project, a home for directional designer and contemporary brands, and Project MVMNT, which replaces the former S.L.A.T.E. and Street young men’s shows.

The changes mean the venerable MAGIC name has been retired from any actual trade shows and is now reserved for the umbrella of Advanstar shows staged in Las Vegas, including the women’s ENK Vegas and WWDMAGIC events.

Along with the name changes, Project has been compressed to a single main floor inside the Mandalay Bay Convention Center, from the two floors it previously occupied. The moves are meant to improve the flow of traffic to all the Project-branded shows and ease the buying experience for retailers, said Tommy Fazio, president of Project.

Most striking for Project attendees will be a new 180,000-square-foot tented structure in the parking lot of the Mandalay Bay Convention Center, which will house both The Tents at Project and the ENK Vegas show. “It’s quite a tent. You can see it from the airplane as you’re landing in Vegas,” said Fazio.

The Tents at Project is the jewel in the reconfigured Project show and will host 100 designer, contemporary and denim brands, which are “at the forefront of the industry” and “interconnected by their innovative, artistic approach to fashion and design,” according to a Project memo. Among the participating brands are Billy Reid, Todd Snyder, Gant Rugger, Michael Bastian, Bespoken, Edun, Robert Geller Seconds, Grayers, Ian Velardi, J. Lindeberg and Jardine. “It’s as if we had merchandised a really cool men’s store,” said Fazio, highlighting other brands like Raleigh Denim, Levi’s Made & Crafted, Save Khaki, Duvetica and Kent & Curwen that are housed in The Tents.

Fazio will oversee a trend installation within The Tents called The Edit.

“It’s almost like I was doing an installation on a retail floor. It’s how the season should look and feel, with forms and mannequins with my favorite looks and shoes and bags and belts — and everything is available for wholesale within the tents,” he explained.

There are plans to expand The Tents concept to other international markets by 2014, with the company looking at Paris, Berlin, Copenhagen, Tokyo and Brazil as possibilities, added Fazio.

Within the Mandalay Bay Convention Center, Project MVMNT is focused on the youth market, including skate, street and urban brands. Sub-categories, including Clique, for progressive streetwear brands, and Street Hearts, brands designed by female designers, segment out the show.

Also segmented out at Project will be dedicated sections for denim, footwear and “California lifestyle,” said Fazio.

In a key digital push, launching this season at Project is MAGIC Market Week’s online showroom initiative, called Shop The Floor. The Web-based platform is available to all brands and buyers at the MAGIC shows, as well as the ENK International shows, now under the Advanstar Global umbrella.

Shop The Floor vendors can create customized brand profiles and private virtual showrooms. Brands have access to a self-service, automated process to upload product images and information into their virtual showrooms. About 280 brands have set up digital showrooms so far, with more than 6,000 products uploaded, said Allison Lombardo, vice president of marketing at Advanstar.

The site will be active for 30 days before and after each season’s MAGIC Market Week. The goal is to extend the impact of the trade shows into the normal buying season, explained Lombardo. Buyers can plan their agendas prior to attending the trade show, build look books and line sheets, connect with brands and generate order sheets via Shop The Floor.

The site is accessible only to registered MAGIC retailers, who go through a qualification process. About 60,000 registered buyers attend MAGIC Market Week, according to the organization’s figures.

Another amenity at Project is a complimentary, ready-built, on-site photo service for brands to shoot images of their collections on models, operated by Sandbox Studios and Ford Models. “It allows brands to communicate beyond the show floor and is part of our ongoing digital strategy,” said Fazio.
— DAVID LIPKE

(10) MRKET’S INTERNATIONAL SPOTLIGHTS
About 350 brands will exhibit at MRket at The Venetian Hotel this season, up 8 percent from the previous February show, and including 54 brands new to the show.

Britton Jones, president and chief executive officer of Business Journals Inc., owner of MRket, said the state of the retail climate was encouraging, noting “how robust the order writing was in our January market in New York.”

International brands will have a spotlight in MRket’s dedicated Made in Italy section, while their British counterparts show in a United Kingdom design area. Sponsored by the Italian Trade Commission, the Italy showcase includes Tombolini, Gran Sasso, Ingram and Luciano Moresco.

A MRket incubator for new and emerging brands called Vanguards Gallery will return to Las Vegas for the second time. Curated by men’s fashion consultant Michael Macko, the showcase will include Hook+Albert, Spivey, Circle of Gentleman, Blue Claw and Well Bred. MRket helps underwrite the costs of participating in the show for the young companies.

(11) CAPSULE’S GROWTH SPURT
Capsule will stage its largest Las Vegas show ever, with more than 200 participating brands, up 20 percent from the previous season.

“We think the Vegas market has really picked up momentum. There’s an uptick in the men’s market in general and we’re bringing a great brand selection,” said Minya Quirk, cofounder of Capsule.

Along with the new, Capsule is offering some old, with its “Donut Shop” cash-and-carry vintage retail concept for buyers who want immediate shopping gratification. A group of dealers will offer vintage apparel, apothecary items and furniture and fixtures that retailers may purchase on the spot.

Capsule offers trend news in its Capsule Paper newspaper distributed at the show. Its traditional off-Strip Las Vegas party will be held at The Griffin in downtown Las Vegas.