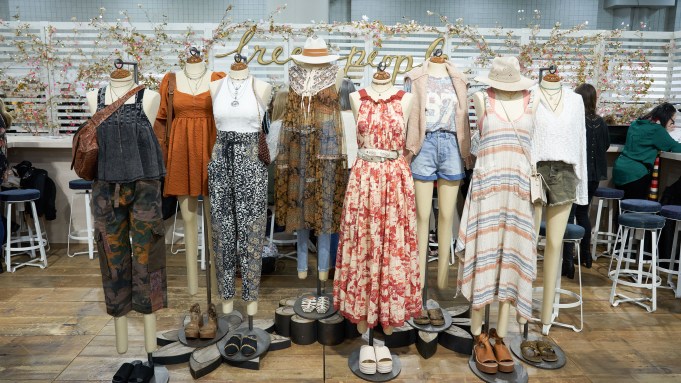 NEW YORK — Retailers were shopping Intermezzo on Monday seeking immediate merchandise that will add excitement, pops of color and prints to their customers’ spring-summer wardrobes.

The three-day show, which closes Tuesday at the Jacob K. Javits Center, featured more than 150 exhibitors. Most of the vendors were showing spring-summer merchandise for immediate delivery. Among the key trends were tie-dye, animal prints, linens, as well as preppy prints. A few vendors were showing their cashmere offerings for fall, along with leathers and suedes.

Intermezzo was replaced by Project Women’s last year, but is back on the schedule, with a full slate of sportswear and accessories offerings. Intermezzo takes place three times a year (January, May and August).

“This has been a great show for us, we have seen steady traffic and a lot of orders being written. Brands are happy with the quality of retailers they have seen, which includes Saks Fifth Avenue, Neiman Marcus, Amazon, Von Maur, South Moon Under and many others,” said Vanessa Vanni, vice president of Intermediate Markets.

“We go to all the shows in New York and are looking for true summer clothing,” said Christine Alcalay, owner of Kiwi, a Park Slope, Brooklyn women’s boutique.  She said her boutique is not trend-driven, and her customers know what they like. She bought some dresses, “pretty little tops,” florals, prints and gauzy tops from Rails, and planned to buy some staples at Michael Stars. She was also looking for “beach-ready” clothing.

Leisa Cram, the women’s buyer of Outside Hilton Head, a women’s boutique, said her store is “very coastal,” and she was looking for linens and coastal colors. “I’m looking for very easy wear and fabulous accessories,” she said.

Jamie Sussillo, owner of Chic, a 650-square-foot women’s boutique in Westhampton, N.Y., said she bought some jeans from DL 1961 and was doing some fill-ins. She liked Z Supply, Fifteen Twenty and Bella Dahl. She said tie-dye is still a big thing with her customers, as well as maxis. Her store, which is open from April through December, caters to women 18 to 60. “We’re still seeing a lot of animal prints, camouflage is fading,” she said.

Brooke Cundiff, cofounder of CoEdition, a plus-size e-commerce site that carries clothing, intimates, active, swim, accessories and footwear, was seeking brands that do extended sizing, as well as accessories. She was looking for great earrings and shoes “so our customers can do all their shopping in one transaction.” CoEdition, which was started by four former Gilt Groupe executives, carries more than 90 brands. Cundiff was at the show meeting with current brands and talking to new ones. She declined to reveal some of the new brands until they’re up on the site.

Vendors said they were pleased with the pace of business, and that Sunday started off well, although Monday’s traffic seemed a little sluggish in the morning, but was picking up by noon.

John Eshaya, owner of J.E.T. by John Eshaya, said he launched a sportswear group under the John Eshaya label. It’s casual and more laid-back than J.E.T., and it’s geared toward the J.E.T. customer who has grown up. “The J.E.T. line is the original California cool girl,” he said. The John Eshaya line consists of linens, pull-on pants, dresses and tops, wholesaling from $45 to $95. “It’s simple and washable and all made in Los Angeles. We’re targeting specialty stores,” said Eshaya.

Eshaya said the J.E.T. line has a lot of color, tie-dyes and brights, but this collection is more muted and neutral. “My cool girl grew up and became a mom,” he said. J.E.T. is now shown as part of the Hotline Showroom.

Walter Baker, owner of his eponymous brand, said the company was doing well with leather blazers, suedes, stretch leather shirts, leather skirts and stretch leather leggings. Last year it offered the pants in three colors, and it is now running eight colors. The looks are for pre-fall. “The reaction has been fantastic,” said Baker. The pants and jackets wholesale for around $300 and the shirts are $250.

Jodie Kouler, president of 525 (which recently changed its name from 525 America), said the company was seeing brisk business with its novelty cashmere. The styles range in price from $60 to $150. Everything is made in China. She said the company has its own factories in China so is trying not to pass on increases to the customer related to the new tariffs imposed by the Trump administration. Kouler said the brand opened some Canadian accounts on Sunday, and sells at stores such as Knit Wit and Valentina.

Daniele Chemla, president of Avenue Montaigne, said the show has been busy for her pants brand. They were selling such looks as seersucker cropped pants, and a long version, as well as pants with fringed bottoms and florals.

Calla Box was doing well with its cashmere sweaters, double-faced jackets and multigauge cashmere cardigan with detachable fur collar, according to Roger Joseph, brand director. These looks were for pre-fall and ship as early as June, he noted. The line is made in China. “The business is fine, we’re adding new stores,” said Joseph. The brand sells stores such as Joan Shepp and Malouf’s, and met with new accounts such as Milly & Grace at the show.