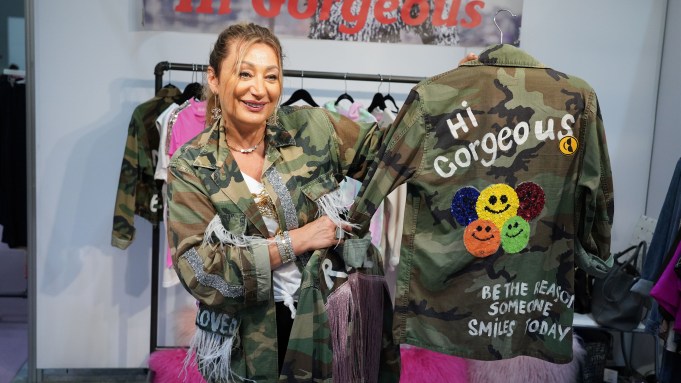 In the second installment of [Pre] Coterie, retailers were on the hunt for animal prints, camouflage sportswear and lots of tie-dyed looks. Easy maxidresses were also in demand at the exhibition, which ended its three-day run Tuesday at the Jacob K. Javits Convention Center in New York.

In total, the show featured about 250 exhibitors.

“Overall, traffic was equally steady across all ready-to-wear and accessories shows. We were really pleased to see high-quality specialty stores attending and buying both immediate merchandise and future deliveries,” said Danielle Licata, president of Coterie and East Coast Womenswear.

Exhibitors were pleased with the pace of the show, but most surveyed said they preferred when this show (previously known as Intermezzo) occurred in May, rather than June. They said that they heard from retailers that it’s often difficult for them to leave their stores in June, after the Memorial Day weekend, when summer business just starts to take off.

Michelle Stander, owner of Mixellaneous, a 6,000-square-foot store in Marlton, N.J., featuring women’s ready-to-wear, home decor, baby gifts and wedding gifts, said she was seeking really comfortable clothes, particularly “comfy loungewear you can go out with,” worn with fun sneakers. Among the brands she purchased was P.J. Salvage.  “They’re not doing just PJs anymore. They changed their line so you can go out with it,” she said. She also bought Theo & Spence loungewear, jackets and pants, as well as Good Luck Tees that go well with joggers and leggings.

Shannon Doherty, owner of Coco and Lala, which has two seasonal stores in Watch Hill, R.I., and a year-round store in Darien, Conn., said she was shopping [Pre] Coterie for immediates, resort and pre-fall. “We love Roller Rabbit. We’re really into caftans right now,” said Doherty. She said she was seeking statement pieces and liked the maxidresses she saw.

Overall, she said there was a lot of shimmer in the sweaters and dresses for holiday, which she really liked.

Doherty said that the store’s customers care about where the products are made and the sustainability aspect. She said she would have preferred the show in May. “We’re about to ramp up the summer season in Watch Hill,” she said.

Another brand she was very excited about was Ampersand Heart NY, which is manufactured in Brazil. All the fabrics are vintage. According to Antonio Da Costa, owner and designer, this was their first time showing at Coterie, although he’s previously shown at Cabana. He works with vintage fabrics from Hawaii, Japan and Brazil. Dresses go from $175 to $280, and tops are $68 to $120. He said it was a good show and he met new clients.

Da Costa said he manufactures about 20 to 30 pieces of each dress. “These dresses are very well-received. There are artisanal components,” he said.

Many of the exhibitors focused on tie-dye looks, neon, lots of camouflage, graphic knitwear, jackets, and flowy, printed maxidresses and caftans for October and November delivery.

John Eshaya, owner of Jet by John Eshaya said, “It’s been so busy. I like the smaller show better than the big one. This is edited, and stores say it’s so much easier to go through,” he said. He was doing well with a lot of neon, printed faux furs, and lots of tie-dye. “[Tie-dye] is huge right now,” said Eshaya. Other key trends were neon taping and neon sweatshirts. “Anything neon is doing really well, as well as glitz and glitter for holiday,” he said.

“It’s been really good. People are eager to write,” said Jaime Nortman, sales director at Peace of Cloth. She said she was showing fall, winter and holiday, up to 10/30 deliveries. “Because it’s a smaller show, we’re more visible. It’s more about the product, and not about the booth. We picked up new specialty stores,” she said. Among some of the key sellers were plaid pants, for $85, wholesale, as well as animal print pants, camouflage pants, and what they’re calling “Cher” pants, which are baby flare pull-on pants, which are slim through the leg with a small, kick-out flare.

Nortman said she saw a lot of action with her sweaters with a slight shimmer for $94, wholesale. “There are so many animals prints out there, they can get enough,” she said. She believes women are wearing less denim and are looking for pants. She also noted that she had two big resort appointments, and sold the company’s golf shorts, which they’ve been doing for 14 years. She said the shorts meet golf regulations “and we give them fashion; they come in 10 colors,” she said.

Brodie, the Yorkshire, England-based fine cashmere company, saw between 80 and 100 accounts on Sunday and Monday, according to Monica Forman, product and business development manager. She said what was selling particularly well were neons and color for Oct. 30 and Nov. 30 deliveries. Intarsias, jacquards, as well as camouflage, were top sellers. Brodie operates a fully vertical factory in Mongolia. Basics wholesale for $89, while instarsias are $199.

Bill Holdsworth, owner of Brodie, added that cashmere prices have gone up about 30 percent in the last 12 months due to supply and demand. “The strength is in novelty. The business is growing substantially because of the sell-throughs,” he said. He noted that while sales in the rest of the world for Brodie have been increasing, “the U.S. market outperforms all the markets in terms of sales increase.”

Marina Kievsky, owner/designer of Hi Gorgeous, said, “We had an amazing two days. We opened stores in Saudi Arabia and St. Barts.” She described her collection as a “glam leisure streetwear line,” that’s all made in New. York. Her collection, which has graphic sayings on sweatshirts, jackets and jeans, wholesales from $34 to $80. The line has love messages on Army jackets and sayings such as “Be the Reason Someone Smiles Today.”

Lauren Morris, head of sales and new business development at Terez, the activewear company, launched its holiday line at [Pre] Coterie. Morris said the company is expanding its repertoire to fleece, outerwear and leg warmers. The theme of the holiday collection is the Fifties and rock ‘n’ roll. Morris said they met with Harvey Nichols and opened some new accounts, including a store in Puerto Rico, at the show.

Haley Shine, the designer for Waverly Grey, said the brand was doing well with a sequined blazer, wholesaling for $100 for holiday, an organza blouse for $72, which is becoming a huge trend in the market, and a feather dress for $89. She said the collection is well-priced and manufactured in New York.

Jessica Schwartz, designer of Central Park West, said the brand was doing well with mixed leopard prints and tie-dye sweatshirts. Other strong sellers were puffers, including a silver one. “We opened up a lot of new accounts, especially in the New England area,” said Melissa Lawrence, who runs sales. She said she spoke to several stores who prefer the show in May. “June is a little bit late, but it gave my designer more time to get the line ready. Stores are used to May. Change sometimes messes people up,” she said.