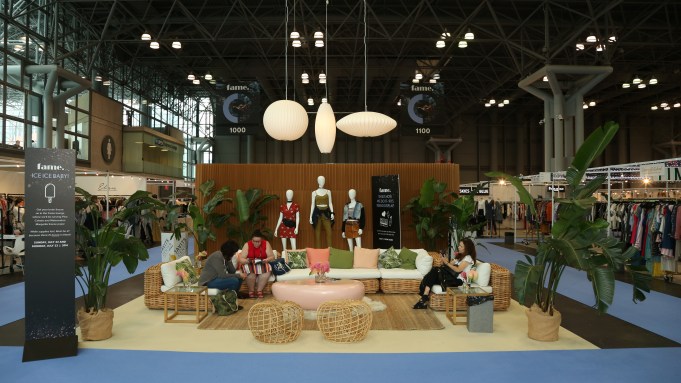 UBM’s trade show Fame was neither a boom nor a bust, but it did suffer from a general malaise carried over from last month’s show.

The show was held earlier this week in Manhattan at the Jacob K. Javits Convention Center. And the malaise likely stemmed from the change this year in the show calendar, which appears to have left some vendors struggling with which of the shows on the 2018 calendar they want to attend.

Traditionally, the show has been in May, July and then September. And many, of course, are also at Magic in Las Vegas in August. With the changes there’s been some confusion over which shows would give vendors the best bang for their buck.

Some vendors last month expressed frustration over not having a May show and then having one back-to-back in June and July. Many elected to show in June and not July because they felt that any buyer who would have attended in May for fall delivery would have had to attend in June to get their fall orders in. And many who elected to show in June and July did so hoping to get some early holiday orders, as well as those for immediate deliveries. A number of them also complained that traffic had slowed from last month.

Natalie Asselstine, the sales representative for Glam, said her brand was showing primarily fall merchandise. “Traffic is slow. It was busier last month,” she said.

Buyers who stopped by to browse the racks were gravitating toward cotton knits averaging $29.75 at wholesale for immediate deliveries, while heavier-weight sweaters were options considered for later in the season. In addition to earth and rust tones, they were also looking at floral prints.

“They want unique florals, not just the normal designs that are everywhere. They are also looking at everyday basics, but with some ruffles or sporty stripes,” Asselstine said. She pointed to a shift dress with a stripe down the side that caught some attention from buyers: “That has an element of fun.”

At She and Sky, Nizum Barua said the company was showing primarily fall, along with some summer and winter to provide options for buyers from warmer climates year-round as well as any who might want to get their buying done for winter early. Olive green, orange, mustard and burgundy were popular fall colors.

“June was better. This show has been slower. And many aren’t here because they’re planning on going to Magic next month,” Barua said.

John Lee, at Do + Be Collection, said his company is doing all three shows, Fame in June and July and Magic next month. The line it showed this month is for October delivery, he said. The average wholesale price is $20 for many of the tops and bottoms.

“We had more people in June,” he said, noting that Monday’s traffic pattern was “better than [Sunday].”

Skies Are Blue was one of the few vendors that included a small section for plus sizes. Jeanne Yi, the sales associate, said this year was the third one that the brand has included some plus sizes in its options. Generally, those who attended the show were eyeballing “suedes, sequins, blazers and sets,” she said. Most wholesaled at $21.50, although options in the plus-size range were higher by $1.50 to $2 due to style adjustments and additional fabric needed.

Yi pointed to a sleeveless set for the misses line, and then noted its plus-size equivalent, which had cap sleeves added to the top.

At Mustard Seed, a faux-fur jacket on display — wholesale price was $22 — garnered some attention from buyers walking by.

According to some vendors, anything furry or fleecy was getting the attention of buyers looking for fall ideas.

J.B. Lee of Hem & Thread said those who stopped by his booth were interested in sweaters, light jackets and cardigans sans any form of closure. Sweaters that got their attention had a bit more “furry texture,” he said, indicating that buyers this time were looking for knits that felt extra soft to the touch. Lee said soft fleece options were also popular.

Lee also noted that the show “was slower this time versus June.” His firm also plans to show at Magic next month.

Tommy Choi of En Crème said of the July show, “It’s been quiet. June was better.” The company will also show at Magic.

The company was showcasing a blue and pink sequined dress topped by a faux-fur jacket. The two at wholesale are $20 and $31, respectively. Most of the options showing were for fall and holiday, with many of the former and late summer options available for immediate delivery. Sweater options include long acrylic cardigans, no closure, that sported a slightly fuzzy texture made to feel as if the fabrication contained mohair.