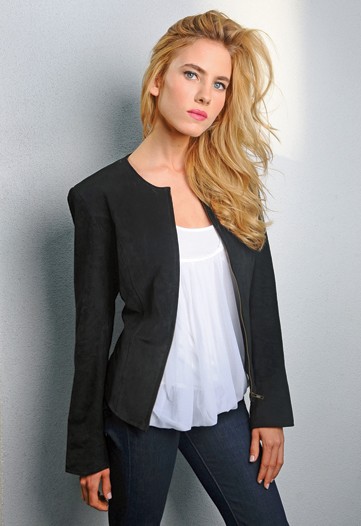 While there will always be a need for staples — basic black, brown and taupe winter coats — vendors are reporting that they are seeing the most interest and growth in their more unconventional offerings. Think fuchsia fake fur, lavish leopard prints and a hint of fringing on the back of a cropped suede jacket.

“People want something that has some real life to it,” said Virginia Lato, owner of Yes Virginia in Toronto. Her response: a line of reversible, unlined, casual and distressed coats that she said were “really comfortable and feel good, and stop some of the gloom and doom.”

Made primarily of suedes and leathers — the line also includes some fabrics at a lower price point — she is putting out fun, younger silhouettes that she said were a variation on the trenchcoat.

Highlights of the line are coats that combine black and fuchsia, while grays will look fresh again, she said.

“A coat is a coat, but we’re doing more fun things with it, a cleaner look, in both short and long lengths,” she said of the offerings, which wholesale from $250 to $1,500. Hardware is kept to a minimum, she said, and if there is a button or closure, it is more as a “statement.”

“There should be none of this sort of middle-of-the-road thing. Closures either have to have a statement, or they’re very quiet.”

Prints also will be strong going into next year. Sue Marshall, a manager at Adler Leathers in Sylmar, Calif., said that leathers in slightly more unusual colors of ivory, red and tan were interesting for next season. Also important are parkas with fake fur hoods.

“And we’re doing some exotic leopard print and zebra print microfiber coats,” she said. “Those have been strong in the past, and this time we’re offering them with different sorts of trims.”

Despite the economy, there still appears to be demand for plush, pricy real furs. Henry Sun, owner of Winter International in New Jersey, which manufactures under the Winter Fur label, is focusing on mostly mink coats, with some fox and other furs thrown in.

“We’re showing a lot of short jackets in black, white, whisky and burgundy, and in loose shapes,” said Sun, adding that rhinestone-studded buttons would add a bit of bling to the line. Also new: fox trim on collars and sleeves. The collection averages $100 to $500 at wholesale for the short jackets and about $1,000 for long.

Mink is also the strongest offering at Giorgio Bella in New York, where owner George Malekan said that he would be bringing mink and fox pieces and accessories, including long and short coats, that would start at $200 wholesale.

Other vendors are offering a wider variety of fur, hoping to capture every price point. At Pelliarts in Toronto, president Chang Oh said scarves and coats would come in mink, fox, rabbit and beaver, among others, and would include a whole gamut of colors.

“We’re showing a lot of fur and fabric combinations, such as fur-trimmed shawls and capes,” he said. So far, buyers are taking to anything in blues, purples and wine shades, although Oh said that basic black, gray and brown were still strong. He also is offering paisley prints in the accessories. Prices range from $10 to $400 at wholesale.

Dawn Johnson, operations manager at 3BWest LLC, a coat vendor based in Denver, is especially excited about the new biker styles she is bringing to WWDMAGIC. Replete with collars and zippers, she said this was somewhat of a change from her line’s usual mainstay of fringed and beaded jackets. “We switched gears for more of a fashion look, and are taking one-of-a-kind pieces to the show,” she said. But the company hasn’t abandoned its fringes entirely: A secondary line will focus on lightweight pigskin jackets in shades such as creamy pink, turquoise and beige.

“They will still have some Western touches, with light fringes across the back. But the overall look will still be biker,” she said of the line, which carries an average wholesale price point of $73.