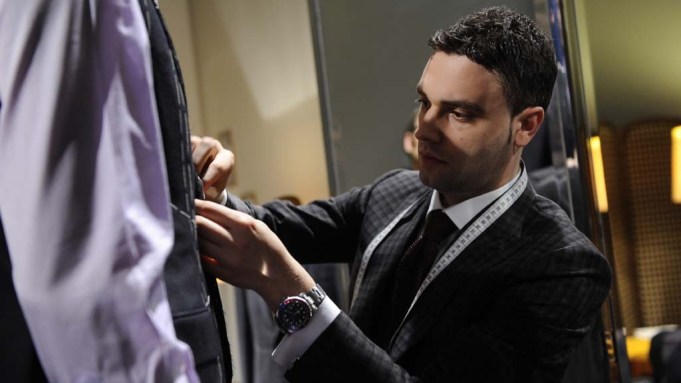 Serving as the creative backbone of Italian fashion for centuries, artisans hold the key to the industry’s future.

But a dearth of bench strength in the younger generations is prompting brand executives and manufacturers to take action to ensure the future.

In the aftermath of the country’s economic crisis, unemployment rates among those between the ages of 15 and 29 measured 28 percent in July — compared to 17.5 percent in 2004. Fashion executives say this number shows Italian youth isn’t attracted to careers in crafts, with many emigrating to other countries to find their futures. The solution being eyed by the industry is to create more and better fashion schools to train a new breed of artisans, which in turn, they hope, will attract more production.

These new artisans will not only be able to use their hands in a specialized craft to create something beautiful and unique, they will be skilled in using highly sophisticated technology and also have a solid understanding of market requests and of the needs of specific distribution channels. Hopefully, they will also learn how to transform tradition into something modern and marketable.

RELATED STORY: Playing to Their Strengths — Execs Tout Made in Italy Craftsmanship >>

“The future of Made In Italy, the future of the Italian fashion industry, rests in this new breed of artisan,” said Stefano Micelli, professor of economics and business management at Venice’s Cà University. Micelli authored “Future Artisan — the Innovation in the Hands of the Italians,” first published in 2011 and reprinted this year. For Micelli, Italian fashion needs a new generation of multitasking, technically savvy artisans.

“I like hearing about these new small brands created in the spirit of Kickstarter.com [a Web site that raises funds for creative projects via crowd sourcing], by finding a heritage or culture and infusing that into a product that’s special, gaining traction through new distribution channels, and then afterward, producing to meet demand,” he said.

Micelli’s vision is shared by many other Italian fashion heavyweights, some of which are opening private schools to attract and train the next generation of artisans.

Spurred by his love of teaching, in October Brunello Cucinelli will welcome 20 students to his new “School of Crafts” in Solomeo, the medieval village in Umbria the designer and entrepreneur has restored.

Heightening the allure for prospective students, Cucinelli carefully planned the school’s duo of knitwear courses around a traditional Italian school timetable, running for five hours a day and nine months of the year. He’ll also be paying the students — who apply through a public notice — a monthly salary of $1,000 for a year. The school is located next door to the designer’s namesake theater, where other students study prose, music and dance, and attend seminars on philosophy, architecture, history and philosophy.

“They will have a chance to share ideas and learn beyond their craft,” Cucinelli said. “At the end of the year, they will graduate with a document that explains their level of skill so they can get a job in our company or at another Italian fashion house. It is my hope to create a Renaissance bottega [“shop”], one that encourages the young to be proud of a career in craftsmanship. And I hope it is successful so I can double the students the following year.”

RELATED STORY: Made in Italy — Fast Facts and Stats >>

Operating an in-house tailoring school since 1985, many of Brioni’s 200 tailors learned their craft in the academy, located near the company’s headquarters in Penne, Abruzzo. Francesco Pesci, Brioni’s chief executive officer, says the school’s training techniques are constantly updated in order to groom a modern, globe-trotting tailor who is just as comfortable working on the computer as he is with a measuring tape.

“Our tailors are the reason why all of our sartorial processes are digitalized today — they have computerized this part of their work, they are much more technically savvy and world traveled than the tailors of yesterday,” Pesci added.

The school can train as many as 30 apprentice tailors over a two-year course. Apart from tailoring, the students are taught mathematics, information technology and languages to prep them for overseas travel.

“I am boldly saying that if we didn’t have our tailoring school, Brioni wouldn’t exist as it does today,” Pesci.“It is the fundamental driving the creative and quality force of our brand. It’s also important because it gives us the balance of youth in the tailoring department — our chief master tailor is in his early 40s.”

Other than internal company training programs, Italy offers 39 fashion courses in nine fashion colleges encompassing all areas of fashion production. Schools report increasing foreign enrollments, and are attracting students with updated courses that are practical with a greater emphasis on technology.

At Polimoda, where 65 percent of the students are foreign but the majority go on to work in Italian companies, graduates are prepped to be “immediately operational” after taking one of 27 fashion courses.

“I want to be a leader in fashion design and technology courses, and you can’t teach these syllabuses without constant updating,” explained Linda Loppa, director. “You have to be ahead of the students and surprise them with new concepts and ways of thinking.”

“We realize that not all fashion companies can come and view the students’ work when they graduate, or perhaps they need someone when the students are in the middle of their course,” said Loppa.

At Milan’s Politecnico, the president of the fashion design program, Alba Cappellieri, ensures graduating designers have experience in all aspects of the fashion industry.

“Plastic was invented at this Politecnico, so we come from a scientific base,” said Cappellieri, “but our motto is we construct futures — which is why our designers also learn new technology, how to work with innovative fabrics, how to follow logistics of competitors, market positioning and processes of retail and distribution, sales and communication.”

“Sometimes it’s hard for us to find new staff because of the wrong training they’ve had, or simply because they feel that being an artisan is beneath them,” explained Fiorella Ghignone, Avant Toi’s director. “There are so many young people in Italy who are unemployed with degrees in philosophy and anthropology, for example. I think we really need to raise the bar on the prestige of training to become an artisan. It’s not for everyone, but it is a beautiful job — every day they create art.”

Half of Avant Toi’s staff are artisans specialized in knitwear as well as printing, embroidery and appliqué processes — to create the brand’s cashmere knits priced between $500 and $3,000. Ghignone said the company has had more success hiring interns and junior staff from fashion colleges Marangoni in Milan and Polimoda in Florence.

Like most of Italy’s industry, fashion schools and major luxury firms are located in the Northern areas but plans are afoot to open the first fashion school in Southern Italy, in Nardò, Puglia. The joint project was devised by Giuseppe Baiardo, founder of Iris shoe manufacturers, and Luciano Barbetta, owner of a luxury clothing manufacturing firm in Salento, Puglia. The duo will receive funding from the region and the Chamber of Commerce.

They hit on the idea when Baiardo opened a shoe production factory in Puglia and they noted the region’s high unemployment, especially among youths. Like many areas of Southern Italy, Barbetta explained, young people are emigrating to find careers in England or Australia.

Baiardo is a board member of the Politecnico in Stra, near Venice, considered the hub of Italy’s shoemaking area.

“We need to open more schools to create destinations for brands to produce here because of the craftsmanship. In my own company, I take 25 to 30 students a year, so I know exactly how I want the courses, a mix of artisan assembly and finishing but also a big emphasis on technology — they also need to operate a robot that nails a heel to a shoe, for example.”

Tentatively titled the Politecnico of Art, Fashion and Crafts, the pair plan to inaugurate the school next year but run some courses starting next month. Barbetta, who owns a clothing-manufacturing business that produces for several luxury brands including Gucci, remains adamant the Italian economy can be “reactivated” by fashion schools.

“I believe we are on the cusp of a new renaissance for Italian manufacturing,” Barbetta said. “For me, the answer is to create new schools to recoup artisan values and teach techniques that encompass culture, technology, spirituality and nostalgia. That, in turn, will create artisans who can make something ethical, real and intriguing — and that will be a magnet for brands to produce in Italy.”