Exhibitors said traffic was up across the board, even from Europe, where the market continues to be difficult. 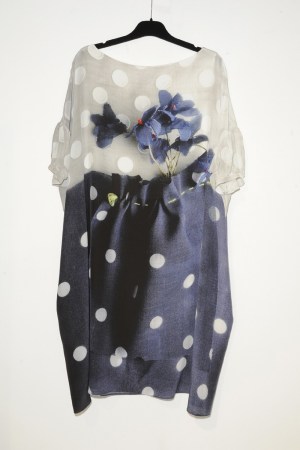 Informa Markets Fashion Sets Agenda for 2021, a Mix of Digital and Live Events

PARIS — The array of trends seemed to reflect the upbeat attitude at the recent range of trade shows here.

Exhibitors said traffic was up across the board, even from Europe, where the market continues to be difficult.

Buyers said budgets hadn’t increased, but they were allocating more funds to standout items at Tranoï, Paris sur Mode, Vendôme Luxury, Capsule and Designers & Agents taking place at various venues across the city from Sept. 26 to 30.

Orlanda Bolton, fashion director of Australian retailer Aco, said, “Part of the new normal is not getting all hyped up about having 10 percent growth every year. That has no space in the new economic climate. It’s all about amazing service and incredible store experience.”

Many buyers cited an “anything goes” aesthetic for the season. “Everything is in fashion,” summed up Marija Obrvan, owner of high-end multibrand boutique Mariastore in Croatia.

Dresses were strong sellers in many silhouettes, particularly in fuller, above or just-below-the-knee-length skirts. “It’s the Dior effect,” said U.S.-based Theia’s president Evelyn Anastos at Vendôme Luxury, explaining that the eveningwear brand’s shorter dresses had been selling well for spring.

“We’ve seen lots of lace, fuller skirts and cropped tops, and lots of black and white,” said Katy Culmo, owner of By George in Austin, Tex., who described current business as “awesome,” thanks to investments in outreach initiatives, including social media.

Guillaume Poussy, managing director of Lil pour l’Autre, which counts Jimmy’s in New York among its stockists, said the brand had taken on former Loewe artistic director José Enrique Ona Selfa two years ago, updating its style in the process.

“We saw an 80 percent sales increase for fall and we are predicting 90 percent growth for spring,” said Poussy. “We are developing very strongly in Asia. China is in the process of becoming our leading market.”

Rising brand Brigitte Bardot’s designer Sarah Ohana said from the Bohemian-themed collection, buyers had been picking out numbers including a guipure shirt and a lacy top and broderie anglaise skirt combo, all in white, as well as the brand’s T-shirts featuring photographs of its namesake.

Showing at Paris sur Mode, she said the brand had seen potential buyers from Mexico and Thailand, and that it is now nearing 500 points of sale. “We would like to develop more in the U.S.” she added.

An Asian influence was trending well for several collections, including Theia’s Japan-inspired spring selection. One standout in this area was South Korea-based Yohan Kim, where designer Taegun Kim mixed elements of Chinese traditional poetry with “Nineties Miami boxy hip-hop.” From this, an off-white cropped top and pencil skirt with flower motifs stood out.

The brand counts Canadian store Blubird among its clients, and had seen potential new customers from markets including Hong Kong, China, the Middle East, Italy and Denmark at Tranoï, according to a spokeswoman.

Tranoï’s accessories contingent was larger than ever. Mariastore’s Obrvan said, “Everything I need is here.”
Several buyers, however, said much of the brightly colored, outsized jewelry ranges on offer would not work for their consumers.

One jewelry brand showing something a bit different was Nach, based in the South of France, which offers porcelain creations in the shape of animals. The brand, stocked by stores including Henri Bendel and Galeries Lafayette, was showcasing a holiday collection including a necklace featuring a swan’s head and feathers.

“We’ve seen buyers from Japan, Australia and Russia,” said managing director and cofounder Nadia Koch. “Our customers are driven by the desire to find something different.”

The brand’s bestsellers include its large animal rings and creole earrings, she added.

In apparel, while bright colors and print were visible in many collections, khaki and olive green were a strong trend. At Tranoï Montaigne, Lebanese designer Dina Jsr was showcasing an elaborate collection of eveningwear that included an architecture-inspired olive green gown with a bodice composed of horizontal bands of fabric, while its flowing gazar skirt was printed with a peacock feather design.

British designer Nigel Cabourn’s vintage-inspired second collection for women was selling well, especially with Japanese buyers, at Tranoï’s Bourse location, he said, with items including a camouflage pinafore dress among the most popular.

Also at Tranoï Bourse, Italian company Horo was showcasing its third collection of T-shirts and accessories in fabrics such as cashmere and milk fiber, featuring prints made with 24-karat gold and other precious metals, a technique patented by the brand.

Horo, which counts l’Eclaireur in Paris and Liberty in London among its accounts, has gained exposure thanks to recent collaborations with brands including Diesel Black Gold and Alberta Ferretti, and was seeking to build distribution in the U.S., Middle East and Asia, according to a spokeswoman.

Reflecting trends on the market as a whole, many brands were highlighting their use of artisanal techniques and local resources. At Capsule, British brand Antoni & Alison was focusing on shift dresses made of silk crêpe or cotton and conceived as digitally printed canvases, brand founder Antoni Burakowski explained.

“They do something that’s so different,” said Laura McGuire, buyer for Wendy Foster stores in California.

Sold in 50 stores worldwide, Himanshu estimated the brand had seen “40 percent more inquiries than in the past,” at this edition, with its indigo color palette selling particularly well. The company’s latest development, still at prototype phase, is a collection of hand-spun and stitched jeans.