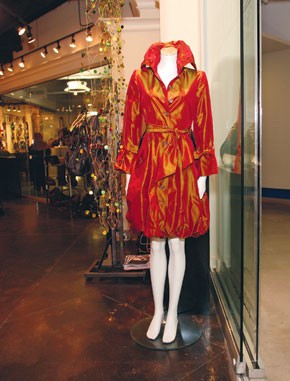 Lower travel costs and an updated Web site boost the profile of FCD.

DALLAS — Saving money was a big factor in Stephanie Kennedy’s decision to shop FashionCenterDallas for the first time last month, and she plans to return in August.

“I can’t fork out the money to go to New York five times a year — it’s insane,” said Kennedy, who owns Nectar contemporary boutique on St. Simons Island, Ga. “It was a fraction of that for me to go to Dallas, and we had such a good time in the showrooms. It’s more relaxed, and I found a lot of new lines.”

As the cost of travel skyrockets, big D is looking like a better bet to buyers — a point that the Dallas Market Center Co. will play up in the second half of the year.

“I think you’ll see more traffic driven into this market,” said Bill Winsor, president and chief executive officer of DMC, which operates FashionCenterDallas. “You can find [hotel] rooms here for less than $100 a night.”

The low cost of traveling to Dallas coupled with the region’s relative economic strength bodes well for the second half, he said.

“[This area] is not immune to what’s happening in the economy, but we have outperformed the U.S.,” Winsor said. “We have not experienced the housing crash or job losses that you see in other parts of the country. We certainly have seen belt-tightening — the average price of hotel rooms has gone down $20 to $119.”

The strong euro was expected to boost international traffic by 70 percent at the Total Home and Gift show June 18 to 24, he said.

The DMC will have a new vehicle to tout bargain travel fares when it relaunches its Web site, dallasmarketcenter.com, in early July. The site has had an 18-month overhaul costing several hundred thousand dollars.

“It’s cleaner, fresher, easier to navigate and more content-rich,” Winsor said. “It was a massive undertaking.”

The company devoted six months to researching the needs of users by interviewing new and longtime buyers, international retailers, sales representatives and those from the types of stores that shop the complex, such as fashion, floral and home.

“The Web site is a major component of business to make the buyer at ease,” Winsor said. “We focused a lot of our attention on creating a navigational scheme to search quickly for products of a similar nature, travel arrangements and to look up events online to see them in a more dynamic way.”

The revamped site was supposed to be up in January, but was delayed for additional enhancements, he said.

The new content for freshman buyers augments an effort that began in January to attract these retailers. Using a research firm, the DMC pinpointed 1,000 new contemporary, better and bridge stores in the Midwest, central South and Colorado and called or visited to promote FCD. About 25 to 30 percent have expressed interest in shopping here, noted Amy Harper, director of retail development.

FashionCenterDallas continues to augment its contemporary offerings, which number nearly 300 lines spread over 100,000 square feet on the 15th floor of the World Trade Center. The area is called D15TRICT, pronounced “District One Five,” and three new showrooms opened there in May: Launch, HaleMary and CP Shades.

Launch, a multiline Dallas wholesaler that also has a showroom at Fashion Industry Gallery, clinched a prime spot on the atrium next to Johnny Was to showcase labels including Bow & Arrow, Curtsey, Denim of Virtue, Haven, Language Los Angeles, Molly, Nela, Scanty and Ogle.

Owner Allyson Lee Cooke plans to throw a party at the Aug. 16 to 19 show to celebrate. “My business is good,” Cooke said. “People say, ‘Are you crazy, why are you expanding?’ But I’m really excited about it. It’s a great location, and it’s beautiful.”