Knit companies, hoping for flat sales this spring, scale back on cashmere and other expensive yarns. 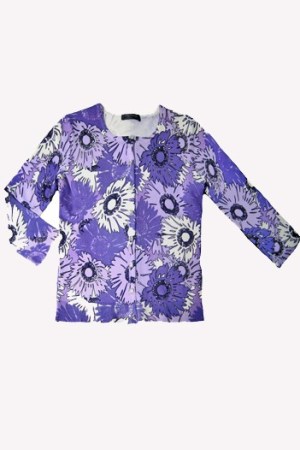 Knitwear manufacturers are turning away from cashmere for spring and toward less expensive yarn blends in an effort to keep prices down because of the troubled economic climate.

This story first appeared in the October 22, 2008 issue of WWD. Subscribe Today.

Most knit companies have jettisoned growth expectations and simply hope to keep from shrinking in 2009, despite strong sales for knits so far this fall, buoyed by the popularity of the cardigan.

However, as orders for yarns and reserving factory space come due this week, manufacturers are gambling on orders that are trickling in later than ever.

“We are bracing ourselves for spring,” said Susie Cho, creative director of the Inhabit knit line. “Orders are coming in much slower, but knit lead times are so long, so we’ve had to guess.”

Inhabit, which does $3 million in wholesale volume a year in about 400 doors, grew 10 percent this fall, largely because it expanded into Europe. But for 2009, Inhabit just hopes to hold volume flat. The niche knit brand’s new cotton-cashmere T-shirts, made of a blend of 15 percent cashmere and 85 percent cotton, have been top sellers. The cotton-cashmere segment wholesales from $65 to $90, on the lower end of Inhabit’s $50 to $200 price range.

“In past springs, we have sold a lot of cashmere,” Cho said. “This season people seem to be a little afraid of it, maybe because of the economy. We’ve been sharp on offering more items with a lower price point, like cotton blends, while we held back on fine-gauge cashmere.”

One firm, Qi Cashmere, went so far as to drop cashmere from its name, and is adding fabrics like cotton and viscose to its contemporary offerings.

“No one wants to buy cashmere for spring, and we want to be a knitwear brand for all year-round,” said Kosi Harris, marketing manager for Qi. “Our customer does not want to break the bank, so our prices are what she’s looking for.”

Wholesaling from $30 to $120, Qi will be in about 600 domestic stores for spring, including Bloomingdale’s and Wink. With the fabric updates, the company is aiming to double its wholesale business this spring, though the company did not disclose volume.

Fellow contemporary knit brand Kier + J is also veering away from pure cashmere in order to reduce prices this spring by 10 to 15 percent, to about $30 to $70 wholesale.

“With this type of economy, cost is important,” said Kier + J president Tom Kao. “This year we are moving to different yarns that will bring prices down, like cotton linens.”

Kier + J, which has the goal of maintaining its $3.5 million in wholesale volume for 2009, designed 17 styles of cardigans, and said four of its five top-selling items for spring are cardigans.

For fall, vendors said cardigans have been the biggest seller by far, and they expect that to continue into spring. Many varieties of the cardigan, or “topper,” won order bookings for spring — from the long boyfriend cardigan to the cropped short-sleeve version and from the knit military jacket to the unstructured open cardigan.

However, this year’s best-selling category can present a price issue.

“Cardigans can use three times as much fabric as a less complicated sweater, so sometimes we try to compensate by using cheaper blends to keep down the price,” said Monica Forman, president of bridge brand Magaschoni Inc.

For Magaschoni, the average knit price is $110 to $140, though special pieces may exceed $300 at wholesale. Magaschoni has had a strong fall, with sales up 33 percent, and anticipates spring sales will be up 22 percent.

“Fall has been a good cashmere and knitwear season,” Forman said. “Spring orders are coming in slower, but we still have to project now to get it made.”

Republic Clothing Group’s knit sales climbed 20 to 30 percent this fall, said president Michael Warner, who added that he is “bullish for spring, with the cardigan that continues to be the workhorse.”

Ava, a better-priced knit brand sold in about 400 specialty retailers, experienced a surge of growth this fall, with wholesale volume rising from $300,000 in fall 2007 to $5 million in fall 2008, said Gail Bezko, director of sales and marketing. Wholesaling from $18 to $60, the line’s bestsellers have been drapy layering pieces in dip dyes and prints. But spring is still a question.

“Orders are coming in more slowly, and buyers are buying closer to season and more cautiously,” Bezko said. “The customer is looking for value, and she will pay more if it looks like more and she can wear it day into night.”

H.M.S. Productions Inc., which does about $140 million in wholesale volume with better knit brands like Cable & Gauge, had a good year as well — until October, when it hit its first comparative sales decline of 4 percent.

“This past week was the first time this fall we’ve noticed a decline in sales,” said Michelle Antonelli, designer for H.M.S. Productions. “Normally our goal is to increase volume every year, but this year’s goal will be to maintain it. We’re also concerned about markdown requests, because full price may not be realistic this year.”

Although consumer price pressure is stronger than ever, costs on the supply side aren’t continuing their rapid increase. After jumping an average 20 percent for fall, factory and yarn prices seem to have stabilized going into spring, vendors said. Between higher commodity and labor costs, a weak dollar and greater shipping expenses, knit manufacturers faced a perfect storm of supply costs for fall. While they haven’t improved, costs have not worsened, vendors said.

“Factory prices haven’t gone down from last fall’s hike, but at least they haven’t gone up,” said Cho of Inhabit.

Woven manufacturers can go to Vietnam or other developing countries where labor is cheaper than in China. But knit manufacturing, which requires additional labor to put a garment together and more specialized workers, is generally bound to China or, more expensively, Italy.

But now many knit vendors are exploring manufacturing alternatives to China, testing 3 to 20 percent of their orders in new factories in India, Vietnam and even the U.S.

H.M.S. is testing three or four cut-and-sew styles in both Vietnam and, domestically, in Farmingdale, N.Y., for spring. Kier + J is testing its cut-and-sew, which makes up a fifth of its business, in India starting for fall 2009.

This likely won’t make a price difference for spring, but vendors hope it might offer future flexibility if prices soar again as they did for fall — and if retailers keep waiting longer to write orders.