The diversified private equity firm has seized upon the dress niche, which has been among the steadier fashion areas at retail.

A look from the Alex Evenings collection.

Seizing upon one of the healthier fashion niches, Versa Capital Management LLC has acquired the Alex Apparel Group, which specializes in classic-styled, better- and moderate-priced social dresses and separates.

The 29-year-old Alex Apparel is an important resource to department and specialty stores in North America such as Macy’s, Nordstrom, Von Maur, Belk, Dillard’s and David’s Bridal. The company generates about $100 million in annual revenues, sources said, and designs and wholesales dresses and separates under the Alex Evenings, SL Fashions and Ignite Evening brands. It does not sell directly to consumers, either through its own stores or via its own e-commerce.

“Colleen has done a good job repositioning the company,” Greg Segall, ceo of Versa, told WWD. “The company has enjoyed consecutive years of growth. Not withstanding the challenges of the channels it sells to, Alex Apparel has a strong and specialized niche, and we’ve done a lot of research around the customer base — both the retailers they sell to and the end users.”

Asked about plans for Alex Apparel, Segall replied, “Colleen’s plans are our plans,” though he did indicate plans to capitalize on growth opportunities from “increased direct engagement with end customers, greater sales channel diversification and potential strategic acquisitions.”

“Our operational piece is solid so we can add businesses to build scale,” Kelly said, suggesting brands focused on day dresses, prom or bridesmaid could be targeted in the future.

The company could also grow its made in America offering, said Kelly. Ten to 12 Alex Evening dress styles are made in New York, providing stores with quicker deliveries and reorders. Overall, most of the apparel is made in China, though a substantial amount is manufactured in Vietnam. 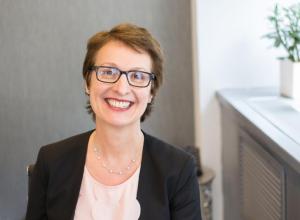 In March 2015, Kelly joined Alex Apparel, based at 1407 Broadway in New York’s Garment District. “The company was profitable but sales had plateaued,” she said. “The product had gotten stale. We were mainly doing mother of the bride but the product was more grandmother of the bride. Retailers got bored. I was 55 at the time and there wasn’t a single dress I would wear.”

Kelly recruited a new designer and together they started developing product for mothers of the brides with a younger attitude, who are inclined to take yoga and spinning classes and show off more body, without being too sexy or red carpet. “We kept the product classic but it needed to be relevant.”

Stretch and comfort qualities were added, and the company didn’t veer from its appeal to women aged 45 and older. While 75 percent of the line continued to have some arm coverage, it became sheer, providing “a modern look of not being so bare,” Kelly said.

In 2017, SL Fashions was purchased, bringing to the group moderate-priced social dresses priced $89 to $129 under the SL Fashions label, as well as the Ignite label, which targets a younger audience starting at age 35 with somewhat more trend-driven styles.

Versa has a diversified portfolio of about a dozen companies including two in fashion — Polartec, the fabric innovator, and Avenue, the plus-size retailer.

Segall said Versa’s bailiwick is brands and companies that are “unique, out of favor and financially troubled. We focus on special situations, where there is usually some story and sometimes severe financial problems or operational challenges. Most of our businesses come to us unprofitable in the beginning.”

However, that wasn’t the case with Alex Apparel, which already has a track record of profitability.

As Segall said, “Alex Apparel is a business where Colleen has done a significant amount of turnaround work and the fruits of that are showing themselves.” 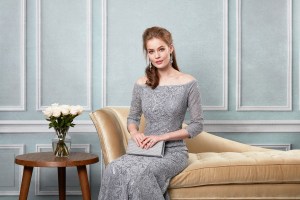 A look from the Alex Evenings collection.