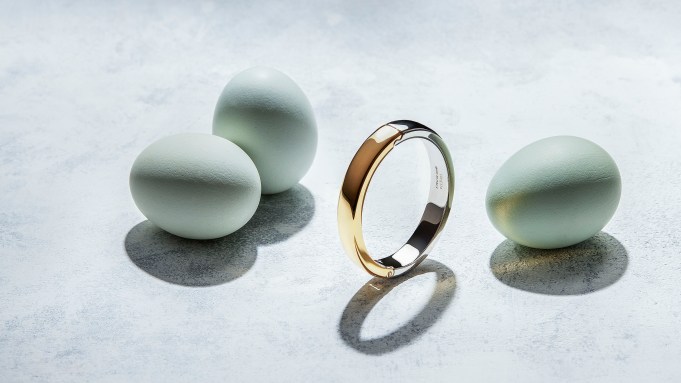 View ALL 7 Photos
Vita Fede relaunches its web site on Thursday, in a move central to the jewelry and accessory brand’s strategic shift from a traditional wholesale model to direct-to-consumer.
“We had to sacrifice quite a bit of volume,” said Cynthia Kozue Sakai, designer and owner of the nine-year-old New York-based Vita Fede luxury collection, during an interview in which she explained the change.
Sakai said Vita Fede six months ago stopped shipping to stores such as Bergdorf Goodman, Neiman Marcus, Saks Fifth Avenue, Bloomingdale’s, Intermix, Shopbop, Lane Crawford and Harvey Nichols. “It was a difficult conversation, but many of them said they understood my decision. Some of them I will continue to work with in nontraditional wholesaling, and some said they would continue to buy my pieces personally. It’s what I needed to do to spring Vita Fede into the future of what I think will be modern luxury.”
Sakai believes she’ll be able to tell the Vita Fede brand story better, present newness often and keep consumers more engaged. She will be donating 20 percent of her top-line sales to two charities: More Than Me, which builds schools for girls in Liberia, and Charity:water, which provides clean drinking water, which she couldn’t afford to do before under the old business model.
The decision by Vita Fede to go direct-to-consumer reflects an acceleration by brands toward “disintermediation,” as described by industry experts. For decades, designers and vendors have reduced their dependence on retailers, initially opening their own stores, then launching web sites, and now, narrowing their wholesale distribution, though not always to the degree that Vita Fede has.
In 2014, Coach, under the then-new chief executive officer Victor Luis, started pulling the brand out of some 250 department store locations, and closing many Coach stores in the U.S. to focus on better-performing locations. Last year, contemporary brand Vince made a strategic decision to narrow its wholesale distribution by no longer selling its apparel to Bloomingdale’s and Saks Fifth Avenue, while entering into larger arrangements with Neiman’s and Nordstrom. Brendan Hoffman, ceo of Vince Holding Corp., told WWD at the time that “the business got too fragmented, with too many points of distribution in difficult malls.” Hoffman said the move enabled Vince to put greater effort into its direct-to-consumer business, expand with categories such as home goods and handbags, and open stores with shorter-term leases.

Last month, Alan Mak, a partner in Public School, told WWD he shifted the business model at the brand to direct-to-consumer only, no longer wholesaling to stores. “At certain points in the life cycle of a brand, different things are appropriate,” he said. “I’m still a big believer in brick-and-mortar,” Mak added, noting that Public School has a pop-up in lower Manhattan.

In May 2017, Michael Kors unveiled a “runway 2020” strategy to move away considerably, but not entirely, from its wholesale channel, with the distribution objective to be 30 percent wholesale and 70 percent retail. The strategy sought to restore cachet, end heavy department store discounting and reduce inventory in that channel, while closing scores of Kors stores and improve the best locations.

Last year, too, Nike Inc. ceo Mark Parker told investors that the group, which had 30,000 retail partners, would favor a few “differentiated retailers” like Nordstrom and Foot Locker, about 40 in all, which would get extra attention from the company in exchange for special branded space and dedicated salespeople for Nike product. “We want as many Nike touch points as possible to live up to those expectations, and that’s why we are investing heavily in our own channel and leading with digital,” Parker said. “And with our strategic partners, we’ll move resources away from undifferentiated retail and toward environments where we can better control with distinct consumer experiences.

“Disintermediation has been happening more on the luxury business than in the middle markets,” one former retail ceo told WWD. “Brands want to control their DNA by telling their stories. There is a movement toward operating more concessions, where brands can make sure they can deliver their DNA.”

Sakai, a Japanese American, who launched her first accessories line, Girlboy by Koco, when she was 18 and at age 21 opened a fashion showroom in Los Angeles, in 2009 received a gift from a friend, a handcrafted gold chain bracelet from Florence. That inspired her to take her first trip to Italy to find the local artisan who created the bracelet, finally finding the boutique nestled on the Ponte Vecchio. That meeting set in motion what would soon become Vita Fede, which means “life” and “faith” in Italian.

The new web site for Vita Fede, vitafede.com, shows male and female models in the same jewelry. “The idea is to have jewelry for all. We have eliminated the gender of our web site. There are no women’s or men’s sections,” said Sakai.

The web site took about four months to redevelop and about eight months to redesign. It introduces several categories and services new to the collection, including sterling silver and 18-karat gold jewelry, and tech accessories such as phone cases and leather-wrapped bracelets in collaboration with bicycle maker Ascari, while continuing with gold-plated brass jewelry. Home decor, eyewear and “shoe jewelry” that clips onto your footwear are also being introduced, and the brand’s “Titan” bracelets can be customized.
Vita Fede is also offering same-day delivery in New York (provided the order is placed by 1 p.m.) and flower bouquets, and customers are notified that 20 percent of every sales dollar gets donated to the two charities.
The products, designed by Sakai with a modern yet classic aesthetic, are made in Italy. Exclusive items will be sold at The Webster and Barneys Japan this fall, and social media is being stepped up, with Instagram Vita Fede’s largest platform. It’s another way to bypass middlemen like department and specialty stores and help brands get in front of customers.
While retailers notoriously squeeze vendors for markdown money, “I don’t believe that was one of our biggest driving points to change our business,” said Sakai. “It was something we really didn’t struggle with.
“What we did struggle with was we weren’t able to tell people who we were, what we believed in,” Sakai added. “We didn’t have the freedom to make it our own. There was something really missing out of the brand. We were not able to have a direct relationship with our consumers. By going D-t-c, we are able to share our values, our passions, our designs. We’re not constrained by a traditional wholesale calendar. We can keep customers engaged by having more freshness more often, telling stories, getting closer to consumers. Consumers are purchasing differently. They want newness more often. They want to know about the brand, its values, the stories behind the photo shoot, the designer.”
Newsletters