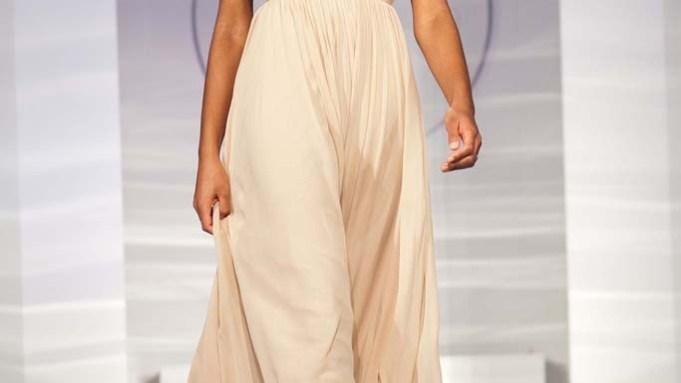 ATLANTA — Despite icy conditions, flight cancellations and other delays, retailers made it to the Atlanta Apparel Market that ended its four-day run on Monday at the Atlanta Apparel Mart to stock up on maxi and shorter-length sundresses in bright colors and prints for summer, as well as denim jeans, shorts and feminine tops.

“This is a great dress market,” said Kaye Davis, vice president of fashion for AmericasMart, which organizes the market, citing sheers and chiffons as key fabrics.

A few exhibitors were still setting up on Friday, the second day of the show, due to weather-related delays in getting their merchandise. Heidi Ackley, owner of Pearly Vine Apparel, said UPS didn’t deliver her merchandise until Friday morning.

Although buyer traffic was light on Thursday, Sonia Roldan, owner of Basically Me, said she had her best day ever, adding, “We had some very serious buyers here.”

Lori Kisner, senior vice president of apparel at AmericasMart, said, “We know we’re taking a little hit, but the serious buyers will be here.”

Davis added, “The stores are here because they need something new and fresh, and they had a [cold] winter this year.”

Retailers said they had a good 2013 and several increased their summer buys. Emily Coleman, owner of Lula Mae in Jacksonville Beach, Fla., increased her open-to-buy as much as 50 percent for her store and e-commerce business. She bought sundresses, lightweight tops in linen, cotton and silk, and denim jeans for summer, focusing on “polished and wearable” styles in designer, resort and contemporary.

Carrie Lawson, owner of Anna & Alice, a boutique in Raleigh, N.C., increased her buy by about 50 percent for summer, too, adding that she is moving into a new and larger location on March 1. Her sales last year rose about five percent over 2012. She booked most of her summer here and started fall. She ordered maxi sundresses, tank tops, shorts and denim jeans for summer, including John & Jenn, Love Sam and Chelsea Flower.

Marti Tolleson, owner of Two Friends, with two stores on St. Simon’s Island, Ga., said she ended 2013 with a sales increase in the low-single digits. She bought sundresses she described as “easy to wear and cool but good-looking,” and skirts, both in long and short lengths. She also booked ankle-length cigarette pants in simple, bright colors, as well as shorts with a scalloped edge.

“The look is a skinny pant with a tunic top,” she said. She preferred solid colors so that her customers can mix and match. For fall, she booked slim, long pants, jackets, sweaters in cotton and cashmere, and tunic tops.

Cindy Britt, owner of Collections Boutique in Louisville, Ky., shopped for Kentucky Derby dresses in bright colors, as well as tops and jeans in white and indigo. She said electric violet is a hot summer color in everything except denim. Her brands included Blank NYC denim and Bella Dahl tops. Britt’s sales increased slightly in 2013, but she is keeping her open-to-buy even with 2013.

Lindsey Norris, ready-to-wear buyer for Bevello, a 21-unit women’s wear retailer based in Raleigh, N.C., ordered casual and knit day dresses in maxi and short lengths and lightweight tops in prints and novelties for May and June deliveries, all in young and contemporary lines.