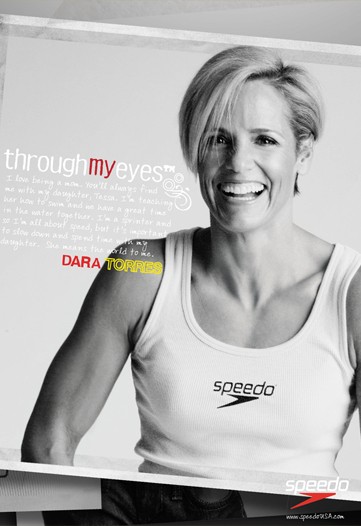 Dara Torres is breaking records even out of the pool. She is the oldest American swimmer to compete at the Olympics, and Beijing will be her fifth trip to the international sporting event. At 41, Torres is shattering long-held assumptions that peak athletic performance is restricted to a certain age bracket. She will compete at the games in Speedo’s much-hyped LZR Racer, codesigned with Comme des Garçons.

The sky’s the limit for this Russian pole-vaulter. Yelena Isinbayeva set another world record, 5.04 meters, at last month’s Super Grand Prix. She is the gold-medal favorite for the Summer Games, where Isinbayeva will be attempting to set her 24th world record in Adistar High Jump shoes.

Carolina Kluft already has an Olympic gold medal.
The 5-foot, 10-inch Swede is the reigning Olympic,
world and European heptathlon champion. But Kluft decided not to defend her heptathlon title at the upcoming games, where instead she’ll concentrate on her two new events: long jump and triple jump. Insiders say she has a good chance of leaping to another gold in the long jump.

This Aussie-turned-Austrian athlete is the defending Olympic triathlon champion. Katherine Jesse Allen was a virtual unknown when she competed at the last Summer Games in Athens, and her performance in the swim and bike legs of the race, where she finished 44th and 28th out of 51, respectively, didn’t turn any heads. But in the final leg, Allen cruised past 27 competitors — sprinting past Australian leader Loretta Harrop just 100 yards from the finish line.

Beijing 2008 will be Tian Jia’s third trip to the Olympics. She and partner Wang Jie ranked second in the Olympics qualification, leading Chinese fans to hope for a volleyball medal on home sand. If things heat up, Tian has a pair of Nike Zesti at hand — bright yellow beach volleyball socks with rubber cleats created for the Beijing Games to protect athletes against extremely hot, cold or coarse sand.