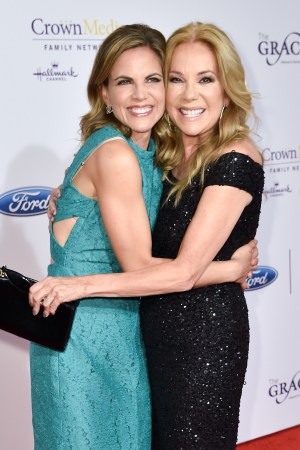 Allison Janney, Mindy Kaling and Kathie Lee Gifford were among those honored at The Gracie Awards held at the Beverly Wilshire hotel in Beverly Hills on Tuesday night. Presented by the Alliance for Women in Media Foundation, the 41st annual gala recognized individuals and programs created by and about women.

Janney, who was singled out for her work on CBS’ “Mom,” said, “I grew up watching Carol Burnett and Mary Tyler Moore and was inspired by great women in media and in television. I never thought I’d be able to make a difference in women’s lives.” In addition to the fantasy film “Miss Peregrine’s Home for Peculiar Children,” Janney will next appear as a police detective in the highly-anticipated adaptation of Paula Hawkins’s hit novel “The Girl on the Train” starring Emily Blunt and directed by Janney’s “The Help” collaborator Tate Taylor. “He’s not a stranger to adapting a successful book into a movie,” she said, noting she hasn’t seen a cut of the thriller just yet. “Tate is actually staying at my house right now working on scoring the film. I cannot wait to see it. It’s a little different than the book, but it honors the book in a lot of cool ways.”

“The Today Show” anchor Natalie Morales was on hand for her morning program’s multiple awards. “I’m sitting right next to Kathie Lee Gifford, so we’re going to be drinking a lot of chardonnay,” said Morales, who recently relocated to Los Angeles in order to take over for Billy Bush at “Access Hollywood” and “Access Hollywood Live.” “It’s a new chapter in my life,” she said. “I’m also going to be continuing on with ‘The Today Show,’ but as a West Coast-based anchor. The idea is to really grow this into something that is very meaningful, a position that allows me to be everything for everyone, but on the West Coast.”

As one of the few men in attendance, Scott Foley turned out to support his wife Marika Dominczyk, who emceed the affair. His advice? “Don’t f–k it up.” Foley said he helped his wife prepare by going through the script with her; though he said she wasn’t likely to later return the favor. “She won’t run lines with me for ‘Scandal’ because she’s such a fan she doesn’t want to know what the hell is going on.”

Kaling’s “The Mindy Project” cast, including Ed Weeks and Xosha Roquemore, who has a role opposite James Franco in the upcoming drama “Mississippi Requiem,” got the party started early by sipping Champagne as they made their way down the press line. Later in the night, Kaling joined her costars on stage and said, “For years and years, the role of a lead actress on a sitcom was to do two things — look amazing and make one third of what my male costar makes,” she said. “I want to be clear: I do always look amazing on the show and no man on my show makes more money than me.”

Recognized with Best Female in a Breakthrough Role for her work on “Black-ish,” Yara Shahidi instead put the spotlight on her pint-sized co-stars Miles Brown and Marsai Martin who presented her with her award. Singer Andra Day, who performed her hit “Rise Up,” geeked out over Lifetime Achievement honoree Lynda Carter. “She’s gorgeous! Holy moly!” Day said under her breath before approaching her. “I’m such a big fan,” she told Carter.

The “Wonder Woman” actress had a message for Day and all others in the crowd, “I’ve done a lot, you know? But I pass that baton onto you and you and you and every other woman now. It’s your turn.”