Eight women were awarded Matrix Awards at New York Women of Communications luncheon at the Waldorf. 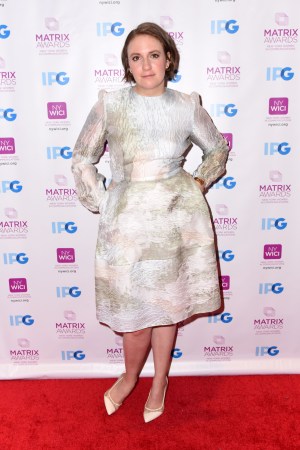 COMMUNICATIONS ALL-STARS: As the ceremony’s emcee, Bravo’s Andy Cohen kicked off the 2016 Matrix Awards at the Waldorf Astoria in Manhattan on Monday afternoon by posing provocative questions to the winners, allowing them if necessary to “Plead the Fifth.”

When he asked Lena Dunham what would happen if she woke up tomorrow as a man, what’s the first thing she’d do, she replied, “I’d kill myself.” Janice Min, copresident and chief creative officer of the Entertainment Group of Guggenheim Media, who oversees the editorial of The Hollywood Reporter and Billboard Magazine, was asked what’s the one thing she doesn’t miss about being the editor of Us Weekly. “Jessica Simpson’s weight-loss stories,” she replied.

Bradley recalled meeting Mellody Hobson, president of Ariel Investments and the current chair of the board of directors of DreamWorks Animation, when she was a high school senior in Chicago and a friend wanted him to convince her to go to Princeton rather than Harvard. Shriver, senior vice president and chief communications officer at Hearst, surprised Liz Kaplow, founder and chief executive officer of Kaplow Communications, by inviting Wynton Marsalis on stage to serenade her. Kaplow had volunteered in New Orleans after Hurricane Katrina and Marsalis is the son of Ellis Marsalis, who founded the school where she volunteered.

Carol Hamilton, group president of L’Oréal Luxe USA, said she has been motivated throughout her career by a phrase she heard when she was an undergraduate at Vassar – “Because I’m Worth It” continues to resonate with her. And Couric, who presented to Nancy Gibbs, managing editor of Time magazine, called her the “Steph Curry of the written word. Every piece is nothing but net.”

Steinem, who won a Matrix Award the first year it was given out in 1971, said even though she’s done this a lot, she still gets nervous when she has to present. She described Dunham, the creator of “Girls” as the voice of her generation. “She is our Orson Welles, only better,” she said. Steinem invited Dunham to her home last year and they had a great conversation. “She’s the living bridge between old and new media…and the living bridge between and among generations,” said Steinem. She said that because people trust Dunham, “they learn that they can f–k up and it’s OK.”

Dunham, who stressed the importance of inter-generational female friendships, said that when Cohen asked her how she would feel if she woke up as a man, she said she gave that answer because she feels so strongly about redefining the work of Steinem and her peers. After doing “magic” mushrooms in college, she had a very strong feeling. “I ran into a bathroom and looked in the mirror and suddenly felt the connection not just to every woman who had come before me, but everyone who would come after me… Thank you, mushrooms.”

As she was leaving the stage, Steinem called out for her to tell the audience how old she is. “Next month I’ll be 30 years old,” Dunham said.

Other Matrix winners were Linda Boff, chief marketing officer of GE, and Nancy Dubuc, president and ceo of A&E Networks, who shared inspiring stories about navigating the communications industry. Some 1,000 guests attended the luncheon, which raised close to $1 million for foundation programming, including scholarships.