A Change of Focus 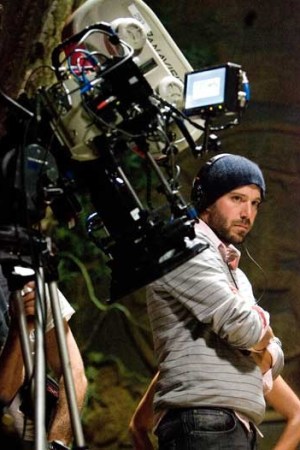 Even while he was busy transforming Shalom Harlow into Jackie O for Tiffany & Co.’s ad campaigns or shooting spreads for Vogue, Harper’s Bazaar and Allure, Carter Smith always knew that what he really wanted to do was direct. Now, as he makes his feature film debut on April 4 at the helm of the upcoming horror flick The Ruins, the former fashion photographer has a shot at the Hollywood movie career of his dreams.

“I always wanted to make films. Even as a photographer I was always trying to tell a story, but you are so limited in the stories you can tell in just one frame,” Smith says from the editing room in Los Angeles, where he’s putting the finishing touches on the film.

A decade ago, the Fashion Institute of Technology graduate and Maine native, now 35, took a four-week course at the New York Film Academy and directed a handful of commercials for brands such as Tommy Hilfiger, but he wasn’t any closer to his dream. “At a certain point I was like, damn, I want to make films, but I haven’t made any,” he recalls. Smith decided to take time off from fashion in 2005 and made the 36-minute sinister drama Bugcrush, based on a short story by Scott Treleaven. Smith also funded the project all on his own. “I put 110 percent into [my film career] from that moment forward,” he says.

Bugcrush fared well on the festival circuit and Smith picked up the Jury Prize for Short Filmmaking at Sundance in 2006. It also impressed producers who were looking for someone to helm The Ruins, which is based on the cult-favorite novel by Scott Smith about a group of young tourists vacationing in Cancún who visit ancient Mayan ruins, with gruesome consequences.

“Bugcrush served as a very effective calling card for him,” says Jeremy Kramer of Red Hour Films, which produced the film for DreamWorks. “When you see a film like that from somebody you don’t know, it’s exciting. It demonstrated a sophisticated understanding of tone and his use of sound. His shot selection and particularly the performances he got made us all believe he could pull off what was going to be a pretty challenging film to make.”

Oddly enough, Smith had simultaneously inquired about the possibility of doing a film based on The Ruins through the Cinetic Management agent he had landed after his successful Sundance outing. “I read the book and I was a fan of Scott Smith,” he explains. “It was the first thing I could picture myself devoting a year of my life to.”

On Bugcrush, Smith had a crew of about 40. The Ruins required a crew of 340, as well as complex CGI work postproduction, which meant the newbie director needed some time to get used to his new parameters. But unlike many starting out in the business, he remained unfazed, drawing on his extensive photography experience.

Beyond simply giving him the artistic tools, the fashion world prepped Smith for navigating Hollywood. “Training in the world of fashion photography was invaluable, because dealing with clients is very much like dealing with the studio,” he says. “There is a corporate side to it. You have to be able to go into a boardroom and present your idea to a roomful of people. It really helped that I wasn’t doing all that stuff for the first time.”

“It added to our comfort level, also,” says Kramer. “Even though he wasn’t familiar precisely with the process of making a film at a major studio, his professionalism translated.”

But for a photographer long accustomed to creating safe and pretty shots for corporate clients such as Banana Republic and Levi’s Dockers, Smith has a surprising taste for the macabre.

“I’ve always loved horror films since I was a little kid,” he says. “There is something very escapist about it that is kind of exciting.”

Growing up, he thrilled to genre classics such as the original Texas Chain Saw Massacre and Henry: Portrait of a Serial Killer. For his latest film, Smith turned to Seventies cult favorites like Cannibal Holocaust and Sorcerer, a jungle horror film. “We weren’t really referencing anything specifically,” he says, explaining that he looked for individual elements like lighting, color palette or handheld camera shots as inspiration.

“I think I’m always going to be drawn to subjects that are a little dark or a little bit scary. I’m not going to make a light romantic comedy any time soon,” Smith laughs, though his ambitions are by no means limited to the horror genre.

His next projects include Come Closer, a Miramax film based on Sara Gran’s 2003 novel about a woman who slowly unravels psychologically, and Troll, which he describes as “a dark and twisted adult fairy tale.”

“It’s nice to distance yourself a little bit from the beauty,” Smith admits of the difference between his film and photography work. “If you have spent many years doing pretty, beautiful, easy, accessible pictures, it’s a luxury to be able to explore something a little darker.”