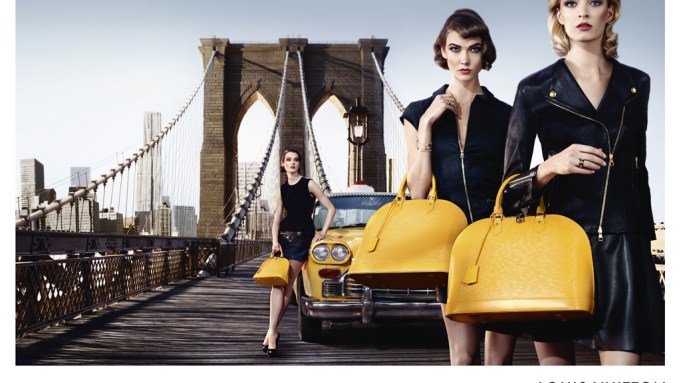 A RIVER RUNS UNDER IT: Louis Vuitton is giving its dome-shaped Alma bag, created in 1934, its very own campaign. Slated to break in an array of May magazines, starting this week with British Elle, the ads come with the tag line “Chic on the bridge” and focus on landmark spans in Paris, New York and Shanghai.

The four women wear looks from Vuitton’s pre-fall collection and carry bags in colors that are emblematic of the cities depicted: taxicab yellow for New York, French blue for Paris and lacquer red for China. A final nighttime image in Paris features a rainbow selection of Alma bags in Epi leather.

Created by Gaston-Louis Vuitton, the Alma bag was originally dubbed the Squire and was rechristened Champs-Élysées before settling on its current name. Vuitton considers it an enduring symbol of elegance “à la française.”

The bridge campaign dovetails with Vuitton’s recent “Invitation to travel” ads, which feature model Arizona Muse visiting the Louvre museum and escaping in a hot air balloon. It will run concurrent with Vuitton’s spring fashion campaign and its “core values” spots.

According to market sources, Vuitton ultimately plans to wind down the current iteration of core-values advertising: The latest series was launched in 2007 with Catherine Deneuve; Andre Agassi and Steffi Graf, and Mikhail Gorbachev in separate situations with Vuitton luggage.