The online social network is getting smaller — and reinventing its business model in a relaunch that goes live Monday. 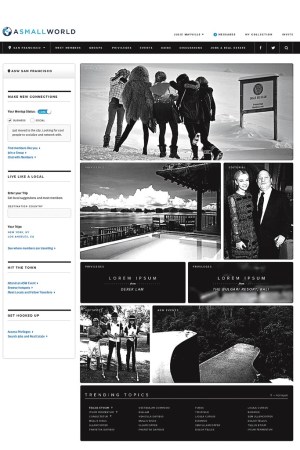 Online social network A Small World is getting smaller — and reinventing its business model in a relaunch that goes live Monday. Long typecast as Facebook for moneyed Euros, the new concept drastically shrinks the membership base and ditches its advertising-supported model for one that charges an annual fee of 80 euros, or $105.

The existing member pool of 850,000 will be culled to 250,000 paying members, who will in turn benefit from a new “privileges program” that includes perks, upgrades and discounts from more than 500 luxury travel, lifestyle and fashion partners such as Mandarin Oriental, Cathay Pacific, Derek Lam, Yigal Azrouël, Rent the Runway, Frette, David Barton Gym and Uber.

As before, membership in A Small World is restricted to those who are invited by current members. Only a limited percentage of existing members will be invited to rejoin the new site — and an even smaller percentage of those who make the cut will have rights to invite other members. The end goal is to create a vetted member pool of affluent, style-conscious and well-traveled global citizens with an enthusiastic interest in peer interaction. Members will be evenly split between Europe, the U.S. and the rest of the world.

“A Small World offers access to everything from a villa rental in Sardinia to a cocktail gathering in Shanghai and all the people, parties and places in between,” said Sabine Heller, chief executive officer of the New York-based company. “Ultimately, our members can live like locals and feel at home wherever they go.”

Some popular features from the old site are carrying over, such as job boards, real estate listings and discussion forums, but all formatted in a redesigned interface.

A Small World is celebrating its relaunch over the weekend with a junket in Marrakech for 80 assorted celebrities and members of the international fashion pack, sponsored by Diane von Furstenberg and Kittitian Hill resort. Among those jetting in for the festivities at the Taj Palace hotel are Olivia Wilde, Dianna Agron, Marianne Faithfull, Poppy Delevingne, Elodie Bouchez, Mamie Gummer, Lily Kwong, Jessica Joffe, Waris Ahluwalia, Harley Viera-Newton, Derek Blasberg, Chelsea Leyland, Kick Kennedy and Allison Mosshart of The Kills.

Despite the glitzy veneer of the launch event — a similar one was held in New York last month — A Small World was ripe for a revamp. Only 63 percent of members were active on the site in the past year and its “members-only” concept had lost much of its cool quotient as the membership rolls grew.

The site was founded in 2004 by Erik Wachtmeister, a Swedish count, just a month after Facebook first launched to Harvard students. Harvey Weinstein’s The Weinstein Co. acquired a controlling interest in A Small World in 2006. However, Weinstein emphasized revenue growth via complicated advertising integrations at the expense of improving user experience, something he himself called one of his biggest miscalculations.

Wachtmeister, who exited A Small World in 2008, has launched another exclusive social network site called Best of All Worlds. Like A Small World it is focusing on an upscale, international audience with features like event and city guides, trip planners and discussion forums based around interests and expertise. It launched with 5,000 invited members last year and has grown to about 30,000.

Paid membership communities for specialized affinity groups is a budding category of the Web. Valet.com offers travel benefits for “creative professionals” who pay $199 a year. Founderscard.com has enrolled more than 10,000 entrepreneurs who pay $595 a year for a host of upgrades and discounts from brands like Virgin Atlantic, John Varvatos and Rag & Bone.

Real-world events are central to the membership experience at both FoundersCard and A Small World. The latter currently hosts 50 to 60 events a month, ranging from meet-ups at bars and clubs managed by local site ambassadors to tentpole events like the Monaco Grand Prix, Art Basel Miami and music festivals where A Small World negotiates VIP entry packages.

Peripatetic members can utilize a mobile app —dubbed “Grindr for Euros” — to find other members nearby. “Unlike Facebook, our value proposition isn’t keeping in touch with people you already know. It’s about having a social experience with someone new and trusted,” said Heller.