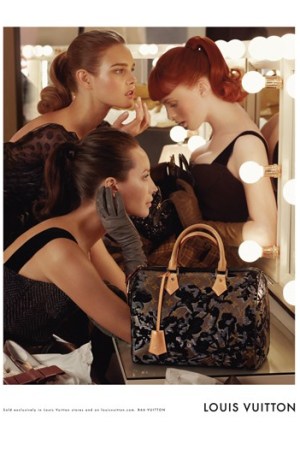 THREE’S COMPANY: Typically, Marc Jacobs gives his collections for Louis Vuitton a different spin in advertising versus the runway. For the forthcoming fall campaign, slated to break in a wide range of August titles, Christy Turlington, Karen Elson and Natalia Vodianova are shown preening in front of old-fashioned makeup mirrors backstage, as if they were ready to take a stroll around the fountain of the Louvre’s Cour Carré, the setting for Vuitton’s show during Paris Fashion Week in March. Ditto for the multigenerational casting — one model in her 20s, one her 30s, one her 40s — adding up to one of the most sophisticated Vuitton fashion campaigns to date, according to Antoine Arnault, Vuitton’s director of communications.

“The atmosphere was very Fifties, very elegant,” he related. This is the fourth Vuitton campaign shot by Steven Meisel, who constructed the period set in a New York studio.

Arnault described the media spend as “flat” and said it would remain print driven, running in tandem with the company’s “Core Values” campaign. The latest one, depicting Pelé, Diego Maradona and Zinedine Zidane playing foosball in a Madrid cafe, will continue to run through the World Cup tournament and into the fall. In light of the disgraced French team, Arnault expressed relief that Vuitton did not opt to cast today’s soccer stars. “We made the right choice to work with legends and not spoiled brats,” he said.

SILVER ANNIVERSARY: New York City has informed Donna Karan practically since the day she was born as a designer, so when it came to the fall Collection ad campaign that marks her 25th anniversary in business, it’s little surprise Gotham plays a central character. Shot by Patrick Demarchelier on location on the 32nd floor of the Met Life Building, the ad features models Karlie Kloss and Anna J photographed at night against the cinematic city skyline. Karan, in typical Karan-ness, said she was going for “the power of the woman — the strength, power and modernity of the woman of New York.”

“Her seductiveness mirrors the strength, power and seduction of New York and all of its sensual rhythms,” she added.

The campaign will launch in U.S. and global fashion and lifestyle publications in September and will run through November. Donna Karan International also is placing digital and outdoor advertisements, and the company is creating a glossy 12-page image piece to be mailed out to Karan’s top clients that will feature the campaign’s photos and fall runway shots.