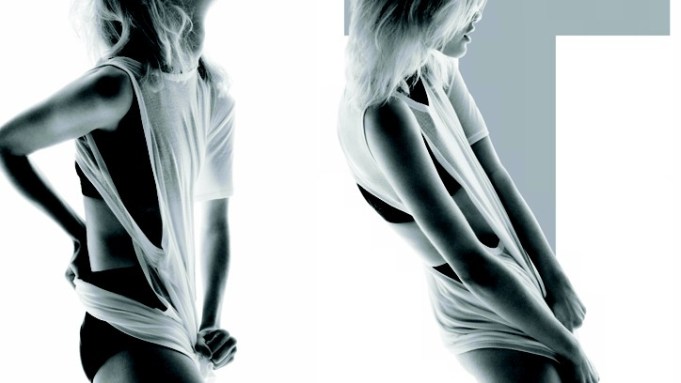 ALL OVER TOWN: Alexander Wang has proven he’s a street-chic kind of guy. Now, the CFDA Award winner will be taking that vision to the streets — literally. On Monday, he will launch his first ad campaign with promotional posters, photographed by Dan Jackson and featuring model Hannah Holman, plastered all over downtown Manhattan. The agenda? To celebrate Wang’s spring T collection, which hits his e-commerce site that day. “The [images] were originally only supposed to be posters we were going to send to editors and stores,” said Wang. “But I felt the energy was much more appropriate for something like guerrilla marketing than anything too proper or formal. Because T is really the core foundation of what Alexander Wang stands for, I thought it should be something that could be much more democratic.” The designer hired National Promotions & Advertising, the agency responsible for those ubiquitous Apple iPod posters, to blanket the intersections of Third Avenue and 12th Street and Grand and Crosby, as well as random hot spots throughout the East Village and Lower East Side. The ads will be replenished once a week for four weeks. As for whether the campaign will break in other cities, Wang said, “if it becomes something people really respond to, but right now New York City is where it’s at. This is our home.”

THE SUNDANCE SCENE: Has the Sundance Film Festival succeeded in returning to its roots? Well, sort of. Founder Robert Redford has decried the emphasis on gift suites, rowdy parties and wannabe celebs. This year’s fest in Park City, Utah, which wraps on Sunday, premiered more than 100 independent features and documentaries, including a new category for low-budget projects.

But the economic downturn might have had the strongest impact on toning down the Tinseltown effect, with fewer logo-plastered storefronts, advertising lounges and swag suites.

“The economy, to be honest, has affected that,” said Katie Kennedy, Sundance’s associate director of corporate development. “But it’s also the efforts we make to protect our sponsors from competitors who use ambush and guerrilla marketing techniques.”

Although official sponsors include Timberland and L’Oréal, brands not affiliated with Sundance have found ways to integrate themselves into the festival, some more organically than others. On Jan. 23, Gucci staged dinner for 20 at the High West Distillery for recipients of the Gucci Tribeca Documentary Fund, whose films had premieres at the festival. The fund, now in its third year, annually provides grants totaling $100,000 to at least four filmmakers.

“So many people come here just to gift product and they don’t really support the actors or the films,” said Seven For All Mankind president Topher Gaylord, who touched down for the party en route to opening the company’s first store in Beijing. “We support these up-and-comers because what they do is the ultimate creative expression, and we hope that the relationships we make here will continue what we do at home in Los Angeles.”

One of the busiest swag suites was the Fred Segal Fun “boutique,” near the festival headquarters, featuring vendors that sell in owner Jaclyne Brander’s Santa Monica, Calif., store. “I tell vendors they can get more press here in five days than they get in a year,” Brander said.

LENS CRAFTER: Photographer Timothy Greenfield-Sanders almost skipped the September Seventies and Eighties fashion reunion hosted by his friend, British hairstylist Harry King. But it was there that Greenfield-Sanders found the idea for his next project. As soon as Greenfield-Sanders saw the era’s top models chatting each other up with their progeny, he thought, “This screams Vanity Fair group portrait. I called Vanity Fair the next day and they immediately responded.” The resulting group image with models leaning against and standing on ladders is based on a classic 1947-1948 black-and-white Irving Penn composition. Greenfield-Sanders also shot 10 of the models in his spare style. The portraits of Christie Brinkley, Cheryl Tiegs, Beverly Johnson, Carol Alt, Dayle Haddon, Esme, Karen Bjornson, Kim Alexis, Lisa Taylor and Nancy Donahue can be seen at the Steven Kasher Gallery through Feb. 27. (The opening reception is today.)

Greenfield-Sanders was struck by Johnson’s story and the obstacles she faced trying to break into the elite modeling industry as an African-American and so he invited her to participate in another one of his projects, “The Black List,” a documentary series about prominent African-Americans telling stories of struggle and achievement, directed and filmed by Greenfield-Sanders with interviews by Elvis Mitchell, now in its third edition. “We talked about the fashion industry and racism and what it meant to be the first black model on the cover of Vogue,” Greenfield-Sanders said. “I was angry,” Johnson said in the film. “I was the first? Why?” Johnson recounted a not-so-pretty episode from her childhood when she was a swimmer on the first all black girls’ swim team from Buffalo, N.Y. Sometimes, the Buffalo team would go to compete with other swim clubs, only to be turned away because of their color, she said. Often, “once we got in and competed, they would drain the pool when we left.” “Volume Three” airs on Feb. 8 at 8:30 p.m. on HBO during Black History Month. The half-hour program features eight subjects, as opposed to the hourlong volumes one and two, which had 21 and 15 interviews, respectively. Other participants in the third edition include John Legend, Hill Harper, United Negro College Fund president Dr. Michael Lomax, BET chief executive officer Debra L. Lee, actor LaTanya Richardson and director-producer Lee Daniels.