The lifestyle quarterly magazine aimed at 1-percenters will mark the occasion with a fall issue featuring Robert De Niro on the cover. 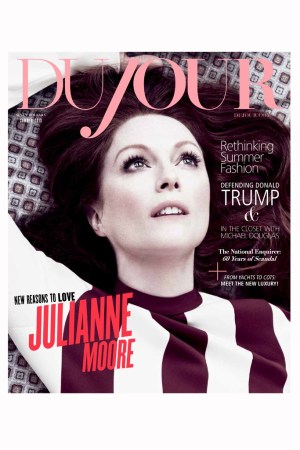 A YEAR LATER: DuJour, the lifestyle quarterly magazine aimed at 1-percenters, at least those with a net worth of $5 million, will mark its first anniversary with a fall issue out in August featuring Robert De Niro on the cover.

The title was one of several lifestyle magazines launched last year aimed at the rich that capitalized on a growing luxury advertising market. Bloomberg Pursuits and a revitalized Best Life from Rodale were others.

Jason Binn, the founder and former chief executive officer of Niche Media, which publishes titles like Hamptons and Gotham, described his newish venture as a start-up — a print quarterly, with an editorial staff of 16, lacking the lavish budgets of its older, glossy competitors. But the magazine has been notable for featuring a number of high-profile contributors, all culled from the stables of the major publishers — Eva Chen, the new editor in chief of Lucky; photographers Bruce Weber, Patrick Demarchelier and Ellen von Unwerth, as well as veteran writers like Vicky Ward, Kate Betts and Lisa DePaulo.

The magazine also has a unique masthead — two coeditors rather than a single editor in chief. Nicole Vecchiarelli, the coeditor alongside Keith Pollock, said contributors have been attracted to the creative freedom of working for an independent magazine.

“People don’t look at DuJour as a way to make money. The primary focus of the relationship is a creative one,” she said. “We’re not Condé Nast or Time Inc. We’re a magazine that’s in its infancy and we have to be mindful of our budgets.”

It helps that Vecchiarelli and Pollock both spent their formative years at Condé Nast and Time Inc., most recently InStyle, where Vecchiarelli was a senior editor, and Elle, where Pollock was editorial director of the Web site, and can rally their connections.

Binn too helps out.

Binn has also known for some 20 years, he said, Weber, who shot the inaugural cover featuring Christy Turlington and later Kim Kardashian. And Demarchelier?

“Patrick Demarchelier’s kid worked for me. He was an intern” at Niche, Binn said.

Binn started to build out DuJour last March, and had an editorial team in place by the end of April. The first issue hit newsstands in September.

DuJour has a unique distribution strategy — 250,000 copies of its quarterly print edition are mailed to readers who fit a certain income criteria — an average income in excess of $250,000, for example, and about 15,000 copies are available at newsstands at Hudson News and duty-free retailer Dufry, both partners in the venture. Its digital editions, which are monthly, are sent to opt-in subscribers of the e-commerce site Gilt Groupe, another partner.

The editors’ marching orders were to create a magazine focused on luxury and that would overlap with some of the categories on the Gilt Web site — fashion, decor, travel and culture. “The one thing we were charged with was luxury lifestyle,” Vecchiarelli said. And so, in the fall issue, besides De Niro and a piece on Judge Judy by Mickey Rapkin, a GQ contributor, there are three fashion features in the well and a Cannes travel story shot by von Unwerth. How does the Judge figure into this picture? “We love the idea of exploring how such a private person became such a trusted figure and get a glimpse into her extreme wealth,” Pollock said.

In a competitive category, DuJour has yet to achieve the name recognition of older titles like V or Departures catering to affluent readerships. Both editors concede the magazine is still in its early days but are gratified by some early strides. The Web site reaches an average of 300,000 quarterly uniques, according to internal numbers; ComScore did not respond to requests for independent traffic figures. Pollock said their goal is to break one million within the next year.

Vecchiarelli described her ambitions for the future.

“In a year for someone to say, ‘That piece is so DuJour’ — for more people to say that, that would be very validating for us,” she said.