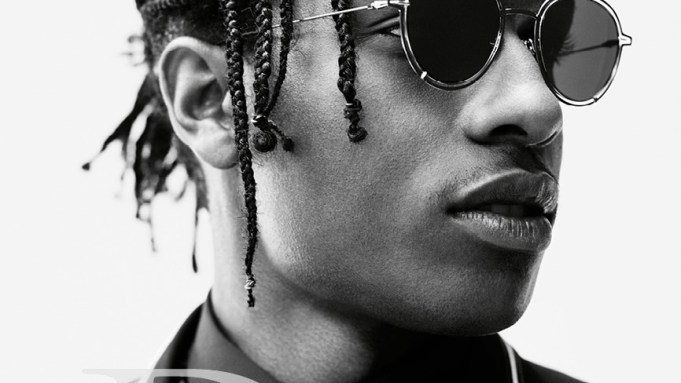 PARIS — Known for his eclectic and daring fashion sense, A$AP Rocky assumes a more couture guise as one of four faces of the latest Dior Homme campaign.

“I really like his personal style and taste. He’s a real fashion lover,” said Dior Homme creative director Kris Van Assche. “He feels like fashion really influences his own work, and he has strong opinions on that.”

Indeed. Interviewed at the London men’s shows, which wound up on Monday, the rapper talked about his equal affection for elite, more formal brands — and those with an urban edge.

“I mean, it’s dope when you can mix it. It’s all about taking two worlds like streetwear and high-end and kind of mashing them together,” A$AP Rocky told WWD. “But when it comes to Dior, it’s just prestige and elegance in my opinion. It’s almost like Coco Chanel was for the lady.”

Asked how he selects his campaign faces, Van Assche said it’s simply a matter of “talents that inspire me. They come from different universes and different countries.”

The men share an important characteristic — subversiveness. “A rebellion side,” Van Assche explained in an interview. “I also think of them as being free spirits.”

Clark, for example, who has delved into youth culture in such films as “Kids” and “The Smell of Us,” figured on Van Assche’s mood board for the Dior collection featured in the campaign, paraded on a vast set with stylized half-pipes and other skateboarding ramps.

Paradot won acclaim for his role in “Standing Tall,” which won him a César for most promising actor. He accepted the statue, the equivalent of an Oscar in France, wearing Dior Homme and overcome with emotion.

Roques, meanwhile, walked exclusively for the French brand during the last Men’s Fashion Week in Paris, and went on to be Van Assche’s fit model.

“He’s the muse of the season. The collection kind of grew on him. Through fittings, you are always influenced by the boy you’re working with,” the designer explained.
At 20, Roques exemplifies the “young French street attitude, but also chic,” Van Assche said.

In a funny coincidence, Pattinson and his singer girlfriend FKA Twigs turned up at a party in London on Sunday night hosted by designer Jonathan Anderson and A$AP Rocky, who collaborated on a capsule range for the J.W. Anderson brand.

Van Assche noted that Lagerfeld’s Pattinson spots “makes the picture even more complete” in terms of Dior Homme’s embrace of different types of men. “I’m trying to push this idea of diversity within one point of view, one style,” he said.

Asked if anything unusual or amusing happened on the shoot, given the fiery and diverse personalities, Van Assche chuckled and offered: “Let’s just say it was not a boring day. It was a fun day.”

The ads are slated to break in Men’s Non-No in Japan on July 11, and then appear in Australian and South Korean editions of GQ, followed by Leon in Japan and Elle Men in China.